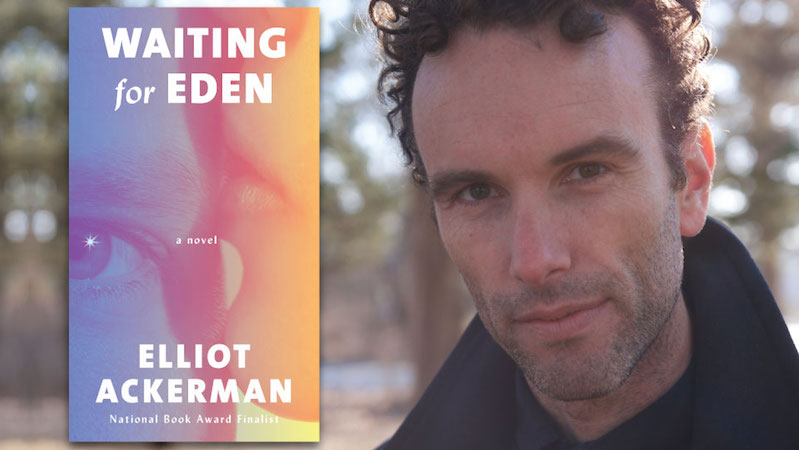 The author of Waiting for Eden shares five books in his life.

Elliot Ackerman’s Waiting for Eden is published this month. He shares five books that straddle life and death with Jane Ciabattari. 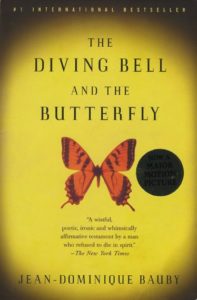 The Diving Bell and the Butterfly, Jean-Dominique Bauby

After a massive stroke, Bauby, the former-editor of Elle Magazine in France, suffers from “locked-in” syndrome. All of his faculties are paralyzed, but mentally he is alert to his surroundings. This memoir, which he wrote through a method of blinking out the alphabet, is a meditation of what it means be alive as observed by someone on the brink of death.

Jane Ciabattari: I read this amazing book (and incredible feat of will) not long after my father had a stroke that left him with locked-in syndrome. He spent the last five years of his life unable to communicate but clearly alert. Encouraged by Bauby, I found ways of communicating with my father, which worked especially well when I began to share memories and realized he was following along. The imagination is so powerful. As Bauby puts it, “There is so much to do. You can wander off in space or in time, set out for Tierra del Fuego or for King Midas’s court.” Is there a passage that speaks most to you?

Elliot Ackerman: I can’t think of anything I’ve read that’s quite like this slim book. There are so many powerful passages. I guess I’ll pick this one, “Today it seems to me that my whole life was nothing but a string of those small near misses: a race whose result we know beforehand but in which we fail to bet on the winner.” This passage is about regret, about a bet at a horse race that Bauby failed to place through negligence when the odds were in his favor. We often downplay the role chance plays in our life, both in what we achieve but also in the disasters we avoid—if we avoid them. “Those small near misses,” as Bauby puts it, are often too terrifying to acknowledge. 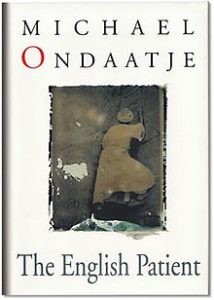 Four dissimilar characters are brought together in an Italian villa during the Second World War. The “English patient’s” story is told out of sequence, through his memories, and it is woven together with those around him at the villa who are struggling to reorder their own lives in the wake of war and the attendant loss.

JC: A gorgeous novel, which just won the Golden Man Booker Prize, given on the fiftieth anniversary of the award. The “English patient” falls from the sky in a flaming plane, his charred body nursed by Bedouins, now in the care of Hana, a young nurse, and visiting “that well of memory he kept plunging into during those months before he died.” Can you say what Ondaatje does to mimic the mind drifting back in time, despite the destruction of the body, and how he gives us a sense of that in between place?

EA: The structure of this novel is such an accomplishment. Language, character and plot are the most obvious ways we emotionally engage with a story, but often we think less about the role that structure plays. The English Patient is a love story and we don’t love linearly. Ondaatje’s book is a collage of memories. So much of its force comes from this structure, where each fragment draws its meaning from the next. 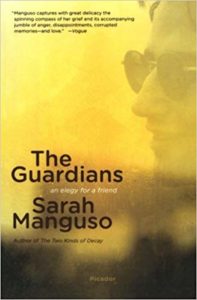 It opens with a report in the Riverdale Press of a man jumping to his death in front of a train. It is revealed that this man is Manguso’s friend Harris, who had escaped from a psychiatric ward two years before. Through Harris’s death, Manguso erects a monument to their friendship and his life.

JC: Manguso weaves together her reminiscences about her friend, and factual text.

“Harris met the train with his body, offered it his body.

“The train drove into his body. It drove against his body.

“It sent him from his body.”

These lines seem to examine that place that straddles life and death. Are there other points in the book that seem to do this?

EA: The Guardians is also an exploration of grief, which is a subject I was thinking a great deal about as I worked on Waiting for Eden. Grief is a liminal state. The verb implies movement, as though it is something that we are doing and then will conclude. Manguso has this to say about the many explanations of grief:

“What is grief for? Mechanical explanation: Pain directs my attention to an injury or insult and subsides once the injury or insult is mended or neutralized. The pain of loss subsides if I replace what I lost or adjust permanently to accommodate the loss. Evolutionary explanation: Grief is a byproduct of attachment in social animals. The grief of loss teaches me to prevent potential loss of kin. Religious explanation: God, the engineer of all that happens, knows best. All life is but a gauntlet ere I live again in heaven. Real explanation: Love abides. There is no other solace.”

Her “Real explanation” is very true, or at least my experiences with grief teaches me that it is. At the core of grief is its interrelationship with love. Love leads us to grief. But it also leads us out of grief. Love is the beginning and it is the end. 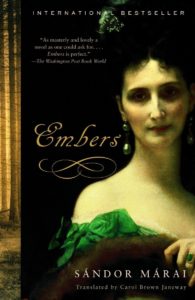 The novel takes place in the waning days of the Austro-Hungarian Empire, when a retired general, close to death, receives one of his oldest friends who he hasn’t seen in forty years. The reason for that absence is revealed as they sit down for a last dinner together. The result is a duel of words, evasions, and manipulations, as the betrayal which dissolved their friendship is exhumed.

JC: The general, seeking revenge, invites a former boyhood confidant who disappeared to dinner in his castle. The meeting of these two rivals, now in their seventies, becomes a setpiece for a larger look at the world: “’We look inside ourselves and what do we find? An animosity that time damped down for a while but now is bursting out again. So why should we expect anything else of our fellow men? And you and I, too, old and wise, at the end of our lives, we, too, want revenge. . . . Why should we expect better of the world, when it teems with unconscious desires and their all-too-deliberate consequences, and young men are bayoneting the hands of young men of other nations, and strangers are hacking each other’s backs to ribbons, and all rules and conventions have been voided and instinct rules, and the universe is on fire?” Márai’s sophistication about human behavior makes that complicated duel—dominated by the general’s monologue and inquisition—gripping. To what extent do you think the general’s obsessive brooding over this betrayal by his wife and best friend mirrors the author’s feelings toward the the collapsing alliances in Europe?

EA: Ah, maybe you love this book as much as I do? Embers is certainly a political book. It also fits into our classification of books that straddle life and death because the book is set in the waning days of the Austro Hungarian Empire. Like the best political books, it is also deeply personal, even intimate. Graham Greene’s work also comes to mind in this regard. In tone, this novel and The Quiet American have a great deal in common. They’re both allegorical books, and to your point, yes, the general’s obsessive brooding over the betrayal of his wife does seem to be a metaphor for the collapsing alliances in Europe, but I found Embers to be far more compelling than a droll book about failures in early-twentieth century European alliances. 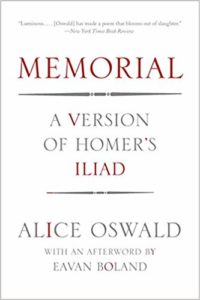 To retrieve the emotional force of The Iliad, the poet Alice Oswald erects a memorial to the poem itself, by making a chronological eulogization of each character killed in Homer’s epic.

JC: Oswald’s “oral cemetery” turns The Iliad on its head, distilling out the vivid life and focusing us on the endless string of deaths, as if a compilation of obituaries. Are there particular individuals who stand out for you?

EA: In interviews, Oswald say that Memorial is “a translation of the Iliad’s atmosphere, not its story.” With each poem, she tries to excavate the epic poem’s enargeia or “bright unbearable reality.” One of my favorite pieces in this collection is a eulogy of two farmboys turned warriors, Isos and Antiphos:

That image of the soldiers returning home “proud as astronauts” as has always stuck with me. As has the idea that after seeing the war they “didn’t want to farm any more.” Lots of bright unbearable reality in those two stanzas.