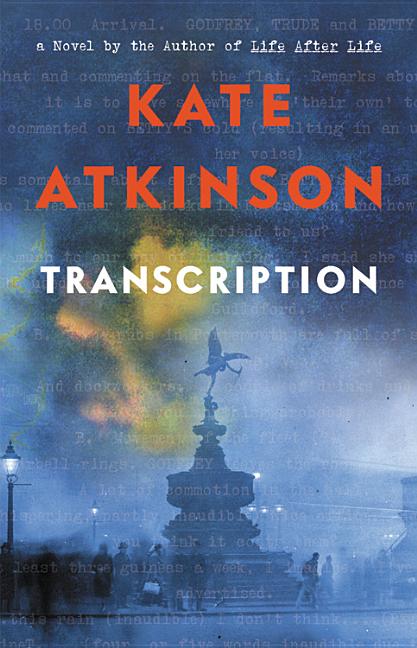 A WWII novel from the author of Life After Life and A God in Ruins. Juliet Armstrong is 18 years old and all alone in the world when she’s recruited by MI5 to transcribe meetings of British citizens sympathetic to the Nazi cause. Soon, she’s pulled even deeper into the world of espionage, a world she will ultimately discover is hard to escape.

What The Reviewers Say
Rave Katherine A. Powers,
Wall Street Journal
There is in this novel, as in all of Ms. Atkinson’s, a sense of absurd predicament expressed in wonderful comic set pieces filled with material detail and running jokes ... So what is this extraordinarily entertaining novel really about? A great part of its genius is the way it can’t be summarized. It materializes out of foreshadowings, reverberations, revisions and transformations... And, indeed, Ms. Atkinson’s buoyant wit and cheerful irony make the misfortunes in these lives, including Juliet’s, not tragedies but kind-hearted lessons in the human condition.
Read Full Review >>
Rave Jonathan Dee,
The New Yorker
Within a deceptively familiar form, Transcription treats the lives and labor of women with fresh complexity ... Atkinson has predicated her enormously successful career upon giving readers intelligent and artful iterations of what they already know they like ... In her best work—a category in which her latest, Transcription (Little, Brown), certainly belongs—she maneuvers the tropes of the murder-mystery genre, of historical fiction, and of privileged white Britishness into a kind of critical salvage of women’s work, women’s lives, that’s as heterodox, in its way, as Cusk’s ... before you know it Transcription has turned from a wartime spy yarn into a fuguelike meditation on the fungibility of female identity ... Far from interfering with the plot of Transcription, this meditation on identity kindles it ... Compared to a Cusk or a Smith (Ali or Zadie), Atkinson might appear to be a sort of literary matron, an aesthetic conservative unwilling or unable to adapt to the evolution of her art; but hers is a profoundly feminist project ... Atkinson’s witty, functionally elegant style in Transcription isn’t terribly distinctive, but it isn’t trying to be; the writing is always in service to the story.
Read Full Review >>
Mixed Jennifer Egan,
New York Times Book Review
Atkinson’s use of comedy in the first half of the novel is unexpected and inspired; even the Dada-esque chunks of Juliet’s transcription are animated by our awareness of her exasperated confusion as she types them ... The overburdened narrative loses focus, and the undisclosed 'horror' from 1940 asserts itself as a leitmotif in the form of ominous dialogue snippets — 'We’ve had rather a shock' and 'We must finish her off,' among others — that float through the text... The deeper problem in the last half of Transcription lies with Juliet. Beguiling as an excitable ingénue, she becomes cipherlike as the book progresses. Her actions seem unintelligible at times, her plucky asides almost perversely frivolous in the face of serious events.
Read Full Review >>
See All Reviews >>
SIMILAR BOOKS
Fiction

Trust
Hernan Diaz
Rave
What did you think of Transcription?
© LitHub | Privacy