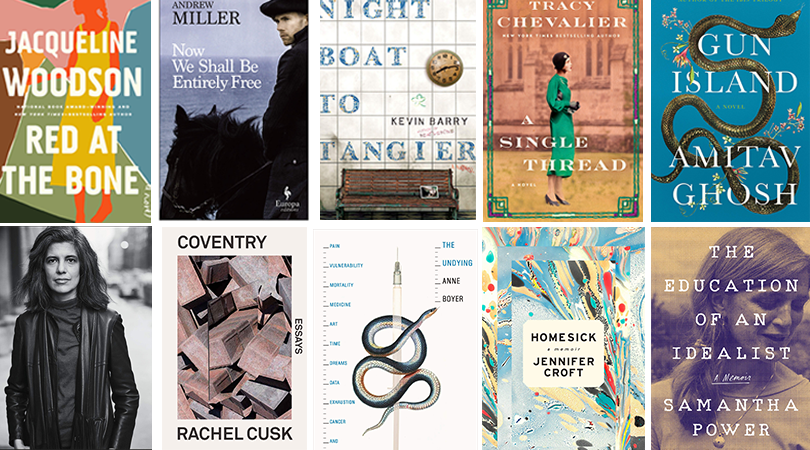 Jacqueline Woodson’s Red at the Bone, Kevin Barry’s Night Boat to Tangier, Benjamin Moser’s Sontag, and Rachel Cusk’s Coventry are among the most critically-acclaimed books of the past seven days.

1. Red at the Bone by Jacqueline Woodson

“… profoundly moving … urgent, vital insights into questions of class, gender, race, history, queerness and sex in America … part of the miracle of Red at the Bone is its evident, steady respect for Iris’s wants, the narrative primacy given to hungers that might not, to many, seem acceptable … Again and again, in rich detail, Woodson gives life to Iris’s growing desires … to depict a mother eager to leave her baby is a far less told story, and it’s astonishing, it’s a feat, to see how lovingly, even joyfully, Woodson sees Iris’s desires through … With its abiding interest in the miracle of everyday love, Red at the Bone is a proclamation.”

2. Now We Shall Be Entirely Free by Andrew Miller

“Miller is not one of those novelists who puts 21st-century pieties into the mouths of historical characters. Instead, as John heads northwards, Miller paints a richly detailed portrait of a society in some ways familiar, in others impossibly strange. Startlingly exact details accrue, of life on board ship, how to make cartridges for a gun, or the (literally) cutting edge of contemporary eye surgery. Miller takes delight in loose ends and dropped threads, introducing characters who are distinctive and surprising rather than essential to the plot … Outlaws, whores, clerks, naval men and tavern-keepers add to the sense of a teeming world … Miller is always interested in something more profound than mere action. Here, a moment spent looking at flowers in a meadow or into the wondering eyes of a horse has as much significance as the gravest peril.”

“To avoid plot spoiling, let me say that what we assume is a two-hander crime novel swells with plenitude into an emotionally crushing panorama of two friends gone wildly astray, punished by regret but with their grim solidarity intact – so far. This is not a journey devoid of dark humour; there are back-breaking moments of mirth, as well as real madness and love … [a] devastatingly vivid portrayal of serious crime and its real consequences … [Barry] is a clairvoyant narrator of the male psyche and a consistent lyrical visionary. The prose is a caress, rolling out in swift, spaced paragraphs, a telegraphese of fleeting consciousness … Barry’s sensibility is eerie; he is attuned to spirits, to malevolent presences, the psychic tundra around us. But what distinguishes this book beyond its humour, terror and beauty of description is its moral perception. For this is no liberal forgiveness tract for naughty boys: it is a plunging spiritual immersion into the parlous souls of wrongful men.”

4. A Single Thread by Tracy Chevalier

“Chevalier is a master of subtlety. It’s the small things—the victory of an even stitch or the reverberating impact of a cathedral bell—that allows the reader to hop aboard the Violet empowerment train … The best-selling novelist has done a masterful job of depicting the circumstances of a generation of women we seldom think about: the mothers, sisters, wives and fiancees of men lost in World War I, whose job it was to remember those lost but not forgotten.”

“Ghosh is mindful of his task as a novelist—to entertain. The confidence with which he shapes a good, old-fashioned diversion around these particular poles is instructive. Escapism has its virtues, but a book unafraid of ideas can be bracing … Ghosh is not exactly subtle about stating his intention here, but sometimes a little clarity is nice … The feat of Ghosh’s book is in showing us that 2019 is as bizarre and incomprehensible as the 17th-century world … Ghosh is a practiced and capable writer; by the seventh page, we’re deep into Bengali folklore, and willing to accept this as a novelistic subject. That Ghosh is able to sustain the book’s momentum when its primary inquiry is so cerebral is no mean feat. The novel made me think of A.S. Byatt’s Possession, or Tom Stoppard’s best plays, texts that treat academic pursuit as something thrilling … Subtlety has its virtues, but the authorial heavy hand does not grate. Of course, this is what the headlines are like these days. The truth is stranger than fiction, and Gun Island is a novel for our times.”

1. Sontag: Her Life and Work by Benjamin Moser

“One of the many fascinating dimensions of Sontag is its scrupulous attention to Sontag’s futile struggle to reconcile mind and body. Even at 700 pages, the book is utterly riveting and consistently insightful, in no small part because of its faithful attention to nuance … The great ambition of Moser’s book is its willingness to organize itself around guiding ideas rather than simply the chronology of events. Or rather, all of these events illuminate the structuring tensions of Sontag’s life … Moser continually peels away the mythology of Sontag—as a single-name icon—to reveal the beating heart of a mortal woman underneath. The book takes this larger-than-life intellectual powerhouse and makes her life-size again … If the project of literary biography involves staging a conversation between the intellectual and personal plotlines of a life, one of the most moving illuminations of Moser’s book is that Sontag’s intellectual plotline—the evolution of her ideas—offers more traditionally recognizable progression and resolution than the narrative arc of her personal life … Many of the most exciting moments in his biography are the ones in which Moser brings himself to argue with Sontag directly … By framing Sontag’s intellectual project within the landscape of her personal experience—bringing her cancer and her queerness and her fragility back into the picture—Moser honors Sontag’s intellectual legacy not just by arguing with her claims but by arguing with her mode—by wondering what additional layers of meaning her work might hold when it’s brought back into conversation with her personal experience.”

“Her ruminations always get cerebral but are based on brilliant bits of observation, as in her piece on driving … Her intensity can be infectious (her appraisal of Lawrence’s The Rainbow, for instance, makes one want to grab it back off the shelf immediately) and her obsessions instructive. Whether writing fiction or non-fiction, Cusk can’t stop thinking about narrative … Cusk is someone whose intelligence naturally complicates issues rather than simplifies them, and who, amused and helpless, is compelled to report back to us from the unique perspective of herself.”

3. The Undying by Anne Boyer

“… a rousing hybrid of memoir and manifesto … incandescent rage animates The Undying, and situates it alongside current literature on feminist anger…as well as recent illness memoirs…critical of a medical establishment that frequently refuses to take women’s concerns seriously and punishes non-compliance … Not long ago, publishers assumed readers wanted whitewashed, upbeat stories about breast cancer, and the market was flooded with cutesy, cringe-inducing titles, like Big C Little Ta-Ta, Let Me Get This Off My Chest and Killer Boobs. Boyer’s intervention into this genre feels like crossing the Rubicon … This is memoir as anti-capitalist indictment, as biting cultural criticism, as vengeance. It suggests a new era in the politics of breast cancer, one that might look less like corporate sponsored marathons every October and more like the radical, confrontational AIDS activism of the 1980s. Arriving the year before an election that could set healthcare and disability policy for decades, The Undying warns us of the human costs of any system that prioritizes profit over lives.”

“… boundary-pushing, or boundary-expanding … Croft writes much of Homesick in this flat, precocious-child tone, using short, present-tense sentences to great effect. For balance, however, she weaves in her own photographs, each captioned with a brief, distinctly adult musing on the main narrative … Croft moves gently, though not lightly, through this time in Amy’s life. She balances depression and self-harm with growing artistic self-discovery … As Croft’s prose becomes more descriptive and complex, the photographs she includes move toward childhood, featuring images of her sister post-surgery … Croft’s photos, mixed in with her text, create continuity between memoirist and protagonist, despite their differing names. Her musings on language and occasional inclusion of Cyrillic script serve the same purpose. They make Homesick into a translator’s Bildungsroman, one in which art is first a beacon, then a home.”

5. The Education of an Idealist by Samantha Power

“This is a wonderful book … It’s an unusual combination of autobiography, diplomatic history, moral argument and manual on how to breast-feed a child with one hand while talking to Secretary of State John Kerry on a cellphone with the other. The interweaving of Power’s personal story, family story, diplomatic history and moral arguments is executed seamlessly — and with unblinking honesty … The older Power is not at all a cynic, but she is less ramrod straight … Always tilted toward using American power to defend the defenseless, moderate the tyrannical, rescue the needy and inspire and strengthen the forces of decency — but when she loses the argument to do so in one country, she doesn’t resign. She looks for somewhere else to fix. Does that sound like an idealist selling out to hold onto the perks of power, or one who keeps looking to fight another day another way? You decide. And you can — because Power is unstinting in giving you all the ammunition you need to denounce or defend her.”