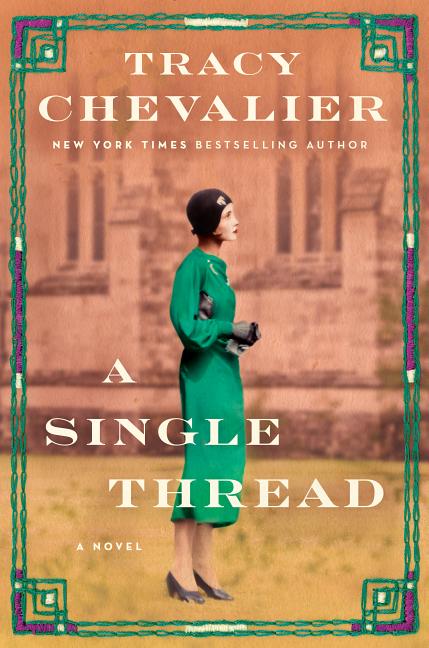 The author of The Girl with the Pearl Earring returns with a tale about one of World War I's "surplus women," who lost spouses or fiancees to the battlefields. At 38, Violet Speedwell decides to leave home and finds purpose and family in a society of women who embroider kneelers for the cathedral.

What The Reviewers Say
Rave Kate Saunders,
The Times (UK)
Chevalier...has a well-known gift for immersing herself in a subject. Her research here is so thorough and so heartfelt that she manages to make the ancient art of embroidery interesting, even to those of us who wouldn’t dream of doing it ... There are a few dropped stitches in A Single Thread, when characters use modern expressions such as 'knackered,' but they do not spoil the quality of the whole tapestry because Chevalier has such a sure eye for detail, whether she is describing the timeless loveliness of the cathedral or the dismal interior of a 1930s boarding house. Reading this is deeply pleasurable and the ending made me cry.
Read Full Review >>
Rave Genine Babakian,
The Associated Press
Chevalier is a master of subtlety. It’s the small things—the victory of an even stitch or the reverberating impact of a cathedral bell—that allows the reader to hop aboard the Violet empowerment train ... The best-selling novelist has done a masterful job of depicting the circumstances of a generation of women we seldom think about: the mothers, sisters, wives and fiances of men lost in World War I, whose job it was to remember those lost but not forgotten.
Read Full Review >>
Rave Hephzibah Anderson,
The Observer (UK)
You’ll hear echoes of the estimable Barbara Pym as Violet’s heels clip across the cathedral’s inner close. Allusions to casual sex and lesbian passion notwithstanding, days are punctuated by cups of tea and people remain largely trapped by their manners. At one particularly stirring moment, instead of finding herself kissed, Violet is treated to a three-course meal ... It’s a time and a place that is perfectly suited to Chevalier’s meticulous scene-setting, gentle pacing and gimlet eye for hidden hurts and secret longings. As for the embroidery, with its repetitive stitches that slowly, almost inconspicuously add up to something dazzling, she couldn’t have picked a more satisfying metaphor. After all, Violet and her fellow broderers are women building not only themselves, but the very idea of independent single womanhood in a world that does its best to ignore their existence.
Read Full Review >>
See All Reviews >>
SIMILAR BOOKS
Fiction

Atomic Anna
Rachel Barenbaum
Rave
What did you think of A Single Thread?
© LitHub | Privacy