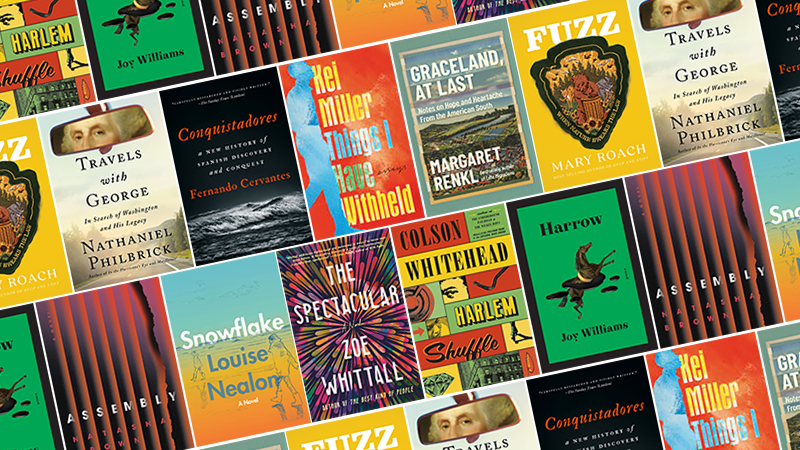 “Williams’ tone is caustic and discomfiting; it brings to mind the moment in which we are living, when matters of science and public health are regularly ridiculed or redirected in favor of political or economic platitudes…At the same time, her vision is too capacious for Harrow to be read so narrowly … The implication is that chaos is both our invention and our destiny, which means there can be no solace or forgiveness for our collusion with it. This is the source of Williams’ fierce and unrelenting anger, and it invests Harrow with a potent moral weight … a piece of writing in the vein of Samuel Beckett or Franz Kafka, its humor weaponized by rage … ‘Before the eyes can see, they must be incapable of tears,’ Williams tells us — excavating, as she does throughout this magnificent and moving novel, the middle distance between silence and experience.”

“What it lacks in length—a slim 112 pages—it makes up for in strength. A scathing takedown of the British class system and the country’s views on race, immigration and gender politics, Assembly packs a wallop … Though impactful, the skeleton story line of Assembly isn’t what makes the book so unshakable. It’s the way Brown expertly captures the narrator’s mental state through an internal dialogue that’s alternately plagued and disgusted by how others perceive her … Assembly is a searing account of a woman trying to ‘be invisible, imperceptible,’ even in the face of what most would consider triumph. In truth, her thoughts—and actions—do just the opposite. They signify a rousing, inspired voice demanding to be recognized and heard.”

“… a warm-hearted book: several degrees warmer, in fact, than the work of Sally Rooney, to which it has already been compared … intimate, chatty, immensely readable. There’s an original and distinctive voice here, and a strong sense of character and place … a loosely plotted book in which events arise from character rather than from any imposed structure — all the more impressive, therefore, that it’s such a pacey read. Character is Nealon’s great strength. Uncle Billy, with his cluttered caravan and his barely concealed loneliness, is a wonderful creation; but it’s Debbie, so convincingly rendered as a volatile mixture of vulnerability and determination, who most fully engages … a novel about how it feels to be young, uncertain and troubled; it conjures this condition with honesty and precise observational skill. Nealon has a nice ear for the apposite simile … Some parts of the book feel a bit undercooked. Xanthe, for example, veers towards caricature at points, and certain narrative threads aren’t fully tied up. Yet this is excusable in a debut novel, especially in one that contains so many riches. Snowflake is an auspicious beginning.” 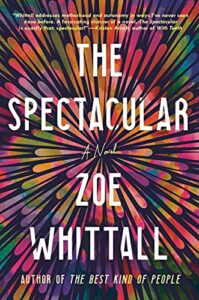 =4. The Spectacular by Zoe Whittall
(Ballantine)

“Zoe Whittall’s taut novel The Spectacular has all the trappings to become the season’s dishiest read. It’s also a gem of literary fiction … The plot of The Spectacular isn’t clearly defined; all three women’s stories connect at certain points, and the narrative jumps forward and backward in time. But this is not a typical sprawling family drama, and in Whittall’s smart and capable hands, these unconventional women are given the space to experience their full, complicated lives. Whittall takes the long view with this multigenerational arc to explore the responsibilities of motherhood, the boundaries of biology and the price for women’s freedom to live fully actualized lives.”

1. Graceland, at Last: Notes on Hope and Heartache from the American South by Margaret Renkl
(Milkweed)

“Renkl’s sense of joyful belonging to the South, a region too often dismissed on both coasts in crude stereotypes and bad jokes, co-exists with her intense desire for Southerners who face prejudice or poverty finally to be embraced and supported … Renkl at her most tender and most fierce … Renkl’s gift, just as it was in her first book Late Migrations, is to make fascinating for others what is closest to her heart … Any initial sense of emotional whiplash faded as as I proceeded across the six sections and realized that the book is largely organized around one concept, that of fair and loving treatment for all—regardless of race, class, sex, gender or species … What rises in me after reading her essays is Lewis’ famous urging to get in good trouble to make the world fairer and better. Many people in the South are doing just that—and through her beautiful writing, Renkl is among them.”

“Mary Roach is the Deborah Vance of science writing … you’re hooked, and for good reason. Roach has a sure sense of drama, and she crafts sentences that crackle and pop … In some alternative universe, Mary Roach and Deborah Vance are show business’ hottest comic duo, headlining nightly at the Bellagio or the MGM Grand, packing them in with laugh-till-you-cry tales of bad bears and bad breakups, rogue leopards and rogue lovers. Until that day arrives, you can savor this excellent book.”

3. Travels with George: In Search of Washington and His Legacy by Nathaniel Philbrick
(Viking)

“Visiting the cities Washington once rode through on his white horse, or paraded through in a cream-colored carriage with two enslaved postillions, or strode into wearing a simple brown suit (the new president had a feel for political theater), Philbrick delivers the details … Philbrick keeps one foot in, and a respectful perspective on, the present throughout, assessing hazards then…and now … With Travels With George, he succeeds again … Washington emerges as the complicated, flawed but no less heroic leader that his newborn country desperately needed. The quantity and quality of the details Philbrick gathers as he straddles past and present make this an extraordinary read.”

4. Conquistadores: A New History of Spanish Discovery and Conquest by Fernando Cervantes
(Viking)

“.. masterful … Cervantes marshals an enormous array of primary and secondary sources to tell the story of the decades that followed Christopher Columbus’ arrival on an island off what is now Cuba … There’s a depressing sameness to the way Cervantes tells the story. The indigenous populations sometimes fought back, often with great skill and courage, and could themselves be brutal to their enemies. But they were ultimately no match for the Europeans, who came in greater and greater numbers and carried artillery that seemed to give them God-like powers … Cervantes sets out not to whitewash such atrocities but to place them in context.”

5. Things I Have Withheld by Kei Miller
(Grove)

“In 15 thoughtful and impassioned essays, prizewinning Jamaican novelist, poet, and essayist Miller reflects on race, gender, family, language, and, most pointedly, the body … Many of these powerful appraisals of the body come in the form of letters to James Baldwin and Kenyan writer Binyaranga Wainaina, but Miller also offers musings on his family’s secrets, portrayals of homeless gay and transgender boys, and questions of literary appropriation. A spirited collection from a significant voice of both fiction and nonfiction.”