The two-time Pulitzer winner and author of The Underground Railroad and The Nickel Boys returns with a novel set in early-1960s New York City, where furniture salesman Ray Carney is trying to be an upstanding family man. But with a second baby on the way and money tight, Ray dabbles with his cousin Freddie in some criminal activity—and a heist gone wrong puts them both in a sticky situation.

What is this?
Rave
Based on 44 reviews

What The Reviewers Say
Rave Janet Maslin,
The New York Times
Whitehead’s own mind has famously gone thataway through nine other books that don’t much resemble one another, but this time he’s hit upon a setup that will stick. He has said he may keep Ray going into another book, and it won’t take you long to figure out why ... brings Whitehead’s unwavering eloquence to a mix of city history, niche hangouts, racial stratification, high hopes and low individuals. All of these are somehow worked into a rich, wild book that could pass for genre fiction. It’s much more, but the entertainment value alone should ensure it the same kind of popular success that greeted his last two novels. It reads like a book whose author thoroughly enjoyed what he was doing ... The author creates a steady, suspenseful churn of events that almost forces his characters to do what they do. The final choice is theirs, of course ... Quaint details aside, this is no period piece ... Though it’s a slightly slow starter, Harlem Shuffle has dialogue that crackles, a final third that nearly explodes, hangouts that invite even if they’re Chock Full o’ Nuts and characters you won’t forget even if they don’t stick around for more than a few pages.
Read Full Review >>
Rave Colin Grant,
The Guardian (UK)
... dazzling ... the language here is wiseguy crisp, zinging with street vernacular ... Whitehead flexes his literary muscles further, extending the boundaries and expectations of crime writing ... The book is also a social drama interrogating the nature of prejudice and how an environment limits ambition. The nuances of Manhattan’s topography drive much of the action ... Part of the book’s pleasure is that it keeps you guessing. By the end, I felt, as Ray does of Harlem: 'Its effect was unmeasurable until it was gone.'
Read Full Review >>
Positive Karan Mahajan,
The New York Times Book Review
... a book that luxuriates in the seedy spaces of late night ... this book too is driven by a serious historical purpose, showing us the micro-changes in the landscape of Harlem and the prospects of Black Americans in the North in the 1960s .. Whitehead’s sweet, sweaty, authoritative, densely peopled portrait of a Harlem in near perpetual summer is the most successful part of the book. Had I not known Whitehead was a talented shape-shifter, I — as an outsider to Harlem — would have believed he had only ever written about this setting ... Except for a couple of potted histories, Whitehead’s research in Harlem Shuffle feels richly integrated with the story; he knows the people of Harlem in the 1960s; and the people are just that: real people ... In the past, Whitehead has shown a deep interest in systems but not always in human psychology (a charge that has also been leveled at earlier systems novelists like Don DeLillo and Thomas Pynchon). This book is a step forward. Ray Carney, the protagonist, is, in some ways, Whitehead’s most fully developed character ... The novel treats the hotel itself as a microcosm of Harlem, and each civilian caught in the heist is tagged with a supple biography. Had Whitehead ended the book after this fierce and funny section, it would stand as one of the few perfect novellas in American literature ... Unfortunately — or fortunately, depending on your taste — Whitehead keeps going; and the rest of the book yields mixed results ... this revenge goes perfectly, with few consequences for Carney — and the book loses energy as a result. Instead of forcing Carney’s self-image into crisis, Whitehead gives us less-than-original observations about how everyone’s a crook ... Happily, Whitehead rights the ship by the third episode, which focuses on another crime to which Carney is an unwilling accomplice, with potentially deadly repercussions for the people he loves. And the crime story, which had become inert, suddenly revs to life, reminding us that Whitehead, beneath all the shambling and high jinks, remains an American master.
Read Full Review >>
See All Reviews >>
SIMILAR BOOKS
Fiction 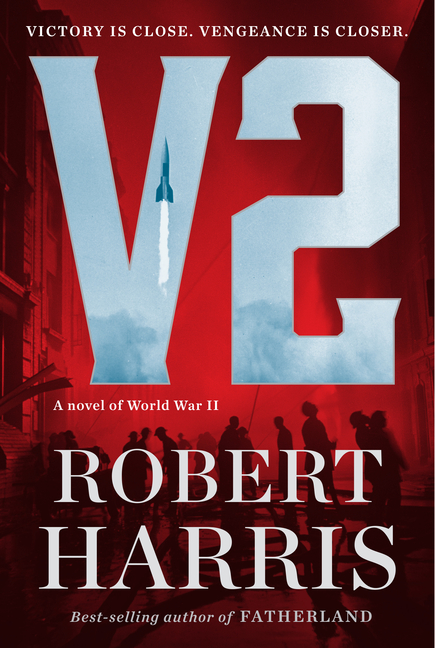 V2: A Novel of World War II
Robert Harris
Positive
What did you think of Harlem Shuffle?
© LitHub | Privacy