Graceland, at Last: Notes on Hope and Heartache from the American South 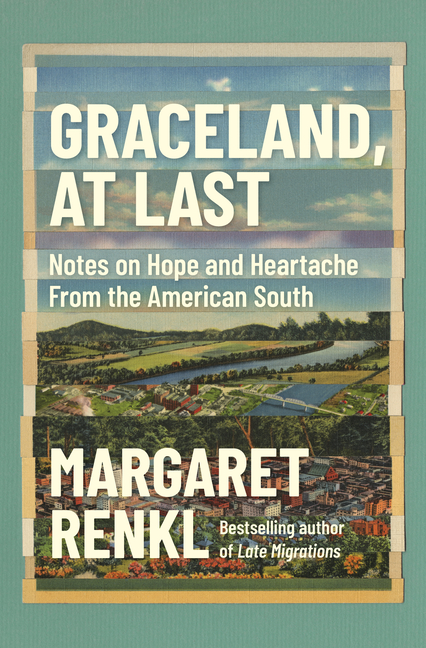 For the past four years, Margaret Renkl's columns have offered readers of The New York Times a weekly dose of natural beauty, human decency, and persistent hope from her home in Nashville. Now more than sixty of those pieces have been brought together in this collection.

What The Reviewers Say
Rave Barbara J. King,
NPR
Renkl's sense of joyful belonging to the South, a region too often dismissed on both coasts in crude stereotypes and bad jokes, co-exists with her intense desire for Southerners who face prejudice or poverty finally to be embraced and supported ... Renkl at her most tender and most fierce ... Renkl's gift, just as it was in her first book Late Migrations, is to make fascinating for others what is closest to her heart ... Any initial sense of emotional whiplash faded as as I proceeded across the six sections and realized that the book is largely organized around one concept, that of fair and loving treatment for all — regardless of race, class, sex, gender or species ... What rises in me after reading her essays is Lewis' famous urging to get in good trouble to make the world fairer and better. Many people in the South are doing just that — and through her beautiful writing, Renkl is among them.
Read Full Review >>
Rave Elfrieda Abbe,
The Star Tribune
...luminous ... In an effort to expand our view of the South beyond stereotypes, she explores the many aspects of her beloved homeland: lush landscapes, family traditions and histories, and political and religious complexities ... Renkl's lyrical prose soars ... I keep this book nearby to revisit the humanity and hope in its pages.
Read Full Review >>
Rave Stephanie Hunt,
The Post and Courier
Renkl’s essays confront the tired, flat stereotypes of a homogenous, conservative, redneck South, while acknowledging the kernels of truth from which they arise ... She rankles at being dubbed the 'voice of the South' because, she says, there is no one South. But that doesn’t keep her from honing a voice of writerly eloquence and muscle, one that is deeply personal yet also universal, which is the magic of a masterful essay. Not all readers will agree with Renkl’s progressive politics, but the collection is much more than that Her prose is reminiscent of Verlyn Klinkenborg’s meditations on rural life, also published in The Times. Both are like stumbling upon an exquisite, rare blossom in an unexpected place—inviting you to pause and ponder, and offer silent thanks in praise ... As a curated collection of newspaper columns, Graceland, At Last lacks some of the poetry and elegiac beauty of her genre-busting debut work of interwoven reflections about family, grief and backyard epiphanies, but Renkl’s singular voice is clear.
Read Full Review >>
See All Reviews >>
What did you think of Graceland, at Last: Notes on Hope and Heartache from the American South?
© LitHub | Privacy