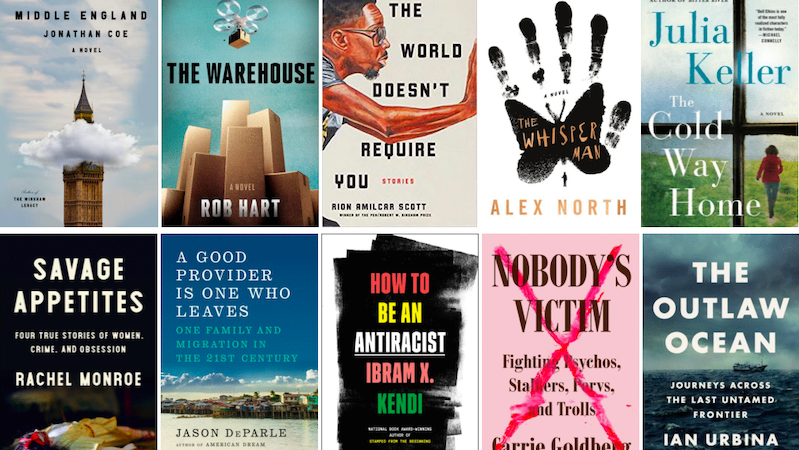 Featuring a Brexit novel, an instruction manual on antiracism, a exposé of abuses at sea, and more

Jonathan Coe’s Middle England, Rion Amilcar Scott’s The World Doesn’t Require You, and Ibram X. Kendi’s How to Be and Antiracist are among the most critically-acclaimed books of the past seven days. 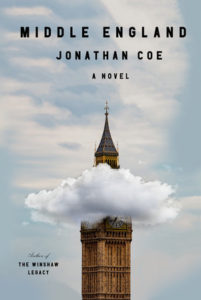 “The most chilling aspect of Middle England…lies in how so many of Coe’s characters display their blatant racism whenever they feel thwarted … Each character is so credible and so vile that the question is not why it took England so long to leave the EU, but why the EU didn’t kick them out years ago … But it’s not all politics. Coe is a deft comic writer, probably Britain’s finest, and there are dozens of laughs along the way … Millions of words have been and will be written on Brexit but few will get to the heart of why it is happening as incisively as Middle England.”

2. The Warehouse by Rob Hart

“…[a] hugely engaging novel … Hart has worked with James Patterson before and he has inherited something of Patterson’s breathless knack for narrative and suspense; it helps that he is a far better writer. There is a rich vein of social satire throughout…and also a palpable sense of anger at the injustice visited upon the underclass by their oppressors. Hart has surely read James Bloodworth’s excellent exposé Hired, and his keenly detailed descriptions of the indignities visited upon worker drones are horribly compelling. It helps, though, that in Zinnia he has an empowered and charismatic heroine, battling sundry thugs and her own conscience with the same determined sangfroid. This is a fine and gripping read, a literary blockbuster with brains. Perhaps the anticlimactic ending lets it down slightly, but until then Hart manages to stimulate both the imagination and the viscera alike.” 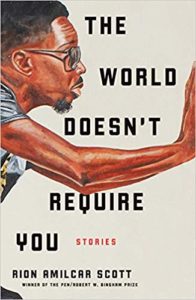 3. The World Doesn’t Require You by Rion Amilcar Scott

“The World Doesn’t Require You feels like a collection about people to whom God said no … Scott makes his stories feel singular. He bends expectations throughout the book, frequently demonstrating this idea … Scott presents Chambers and his project as absurd, while also making the project itself compelling to read. This is exemplary of the balancing act the author pulls off through much of the collection, as his troubled characters try their best to make do with the weight of difficult histories strapped to their backs. Though God may have forsaken them, Scott does not. The World Doesn’t Require You is full of horrible, ridiculous people, but it’s full of grace, too.”

4. The Whisper Man by Alex North

“There are two threads here—the supernatural one and the police-procedural one2—and North does a fine job knitting them together. He switches narrators with each chapter, a technique that can be irritating when done badly but that works beautifully here; it keeps you off-balance and grasping for some footing as you hurtle from Amanda’s squad car to Jake’s lonely bedroom to the Whisper Man’s prison cell … What North does best, though, is ratchet up the tension, imperceptibly at first, then with increasing urgency. If you like being terrified, The Whisper Man has your name on it. But if you get jumpy when you’re home alone, if you’re attuned to every floorboard creak and window-rattling gust, you might want to give this one a skip.”

“The mystery is first-rate with a murderer I never saw coming. The characters are fully developed people who are going through their own private crises—very realistic—at the same time as the murder investigation. But my favorite part is the West Virginia setting and the battles of the inhabitants just to live. Generation after generation, the people who are born and live in Acker’s Gap struggle to survive. Keller covers everything from layoffs in the fifties to the current opioid epidemic and the effects on everyone in the town. Why do the people stay? … Haunting.”

“…[an] enthralling book … worth consuming in one sitting … Monroe zeroes in on the aftermath of murder, on the morbid curiosity that draws eager civilians toward the crime scene and catapults them into starring roles. She avoids the formulaic professional tropes of true crime … It might seem like a mistake, in the book’s ‘Victim’ section, to focus on a crime as familiar as the murder of Sharon Tate, but Monroe has a knack for nosing a new story out of an old one, like a detective casting fresh eyes on a cold case … By the end of the book, I found myself almost admiring the emotional plasticity of women who consciously scramble the logic of the predator-prey relationship in order to escape their unsatisfying lives.”

2. A Good Provider is One Who Leaves: One Family and Migration in the 21st Century by Jason De Parle

“It’s the opposite of an instant book; it has been cooking for three decades. The chef has combined, in considered proportion, ingredients gathered around the world—revealing family and work scenes set in the Philippines, Oman and Saudi Arabia, aboard wandering cruise ships and deep in the heart of Texas. And right when we’re hungry for them, he serves up telling social and economic digressions that place the family’s struggles in a political and economic context of global migration … DeParle has a frank, amiable and plain-spoken virtuosity as a writer A Good Provider Is One Who Leaves deserves a place on the same high shelf as Kate Boo’s Behind the Beautiful Forevers and David Finkel’s The Good Soldiers—recent books that enrapture readers with moving narrative while elegantly elucidating deep, humane and informed understandings of poverty and conflict. These books represent the highest and most powerful use of the oft-read but rarely identified genre of narrative journalism.”

3. How to Be an Antiracist by Ibram X. Kendi

“…an essential instruction manual … [his] transparency serves as an invitation to all of us to accept and grow from our racist behavior. It is one of many components that makes How to Be an Antiracist so accessible … I found myself resisting Kendi’s perspective on more than one occasion. Yet in every case, either his unassailable reasoning, helpful historical context, illuminating data, or some combination of the above won me over … How to Be an Antiracist gives us a clear and compelling way to approach, as Kendi puts it in his introduction, ‘the basic struggle we’re all in, the struggle to be fully human and to see that others are fully human.’ ”

Read an excerpt from How to Be an Antiracist here

“…a timely work that combines the vulnerability of personal experience and the researched, fact-based reporting of nonfiction … Goldberg’s writing is especially compelling when she focuses on specific clients she has helped … While her tone is more conversational than rigidly academic, Goldberg provides solid research to supplement her anecdotes. An important, harrowing look into the dark underbelly of the internet, this book sheds light on the mistreatment of victims and on the society and justice system that often fail them.”

5. The Outlaw Ocean: Journeys Across the Last Untamed Frontier by Ian Urbina

“…[a] tour de force of intrepid global inquiry … With precision, drama, and intimacy, Urbina recounts his role in a dangerous at-sea standoff between Indonesian and Vietnamese authorities, a frightening escape from Somalia, and many other harrowing situations, and describes his tenuous network of sources, translators, fixers, and spies. His biggest fear is that his risky quest may do harm to people rather than good, but there is no doubt that the bravely gleaned and galvanizing facts about maritime savagery and brewing catastrophes, which he so vividly and cogently presents, coalesce into an exposé of immense magnitude and consequence.”