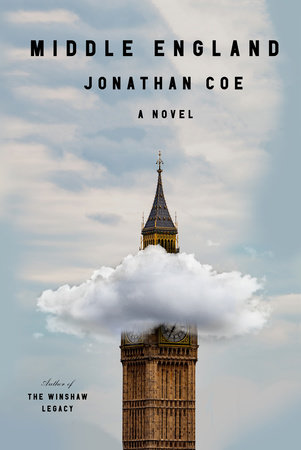 In the third installment of Coe's trilogy, Benjamin Trotter, friends, and family return to observe, mostly with dismay, the run-up to Brexit in a divided Britain.

What The Reviewers Say
Rave John Boyne,
The Irish Times (IRELAND)
The most chilling aspect of Middle England...lies in how so many of Coe’s characters display their blatant racism whenever they feel thwarted ... Each character is so credible and so vile that the question is not why it took England so long to leave the EU, but why the EU didn’t kick them out years ago ... But it’s not all politics. Coe is a deft comic writer, probably Britain’s finest, and there are dozens of laughs along the way ... Millions of words have been and will be written on Brexit but few will get to the heart of why it is happening as incisively as Middle England.
Read Full Review >>
Positive John Williams,
The New York Times Book Review
Politics are thorny in the novel, but Coe still makes space for playful humor ... Sometimes Coe is a bit more wacky than he’s been in the past...But on the whole, his touch retains its delicacy. Creating this of-the-moment milieu requires some believable set pieces, and Coe is good at them ... Middle England, which hews most closely to the perspectives of Benjamin and Doug, two men more or less at Coe’s stage of life, can certainly be read with pleasure as a novel about middle age...But its ambitions to encapsulate the political moment are obvious, and central to any assessment of it ... novels about the Way We Live Now aspire to recreate the feeling of their times, the vibe, as well as the details. And Coe — to his credit, in many ways — doesn’t feel like our particular Now. If his novels are anything to go by, he is wry, compassionate, curious and forgiving. Middle England contains great charms, but its very construction and tradition can also make it feel discordant for the moment it hopes to capture; at times it seems like a wrought-iron street lamp trying to represent a bonfire.
Read Full Review >>
Positive Sam Leith,
The Guardian (UK)
...an excellent writer making an enjoyable, absorbing and less than completely successful attempt to find the sweet spot of [a] sore point ... In its politics, just as in its gripes about public transport, this is a great big Centrist Dad of a novel ... And yet it’s never stronger or more convincing than when it’s furthest from political events ... One problem is that the historical scaffolding is so familiar, and yet will date so fast; this means that certain passages of exposition feel clunky ... And it is when the political discussion is out of the way that the novel becomes richer and less schematic ... Coe’s writing is as smoothly accomplished as ever. His comic set pieces...and scenes...are very funny. Yet this is also a surprisingly sentimental book ... It is an autumnal novel, and a sad one: poignant about the passing of time, the wishing for what has vanished, the decades lost to obscure hatreds, misplaced loves and unsatisfactory marriages – and about what, washing up on the brink of old age, we’re left with and what we can or can’t make of it. That a river, or two, runs through it is no accident.
Read Full Review >>
See All Reviews >>
SIMILAR BOOKS
Fiction

Vladimir
Julia May Jonas
Rave
What did you think of Middle England?
© LitHub | Privacy