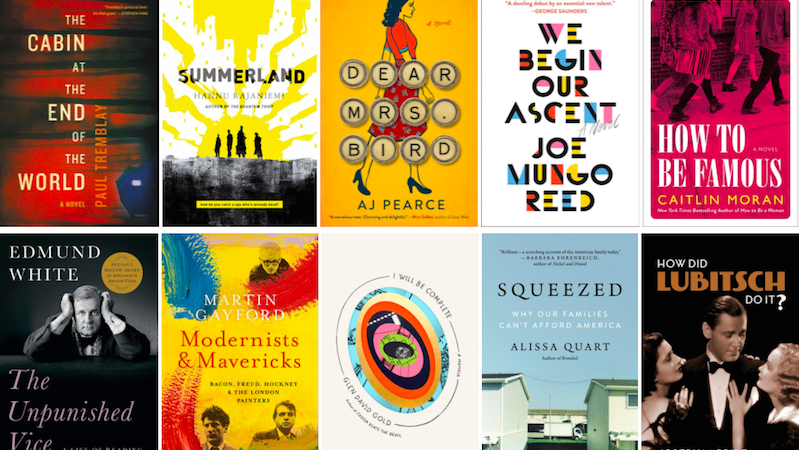 1. The Cabin at the End of the World by Paul Tremblay

“Read Paul Tremblay’s new novel, The Cabin at the End of the World, and you might not sleep for a week. Longer. It will shape your nightmares for months–that’s pretty much guaranteed. That’s what it’s built for. And there’s a very, very good chance you’ll never get it out of your head again … I want to tell you everything about it. I want to detail every switchback and psychological reverse that happens, deconstruct how Tremblay layers in these genius feints of paranoia and disbelief, explain how he builds to these perfect trigger points where everything explodes into blood and violence, then settles, then starts again. I want to, but I can’t. It would ruin it. There is a meticulousness to The Cabin that depends entirely on the slow reveal; on the tension of misunderstanding and inherent bias.”

“Summerland is a world where Spiritualism works—the whole nine yards, ectoplasm, spirit mediums and all … Mr. Rajaniemi keeps pulling new ideas out of his hat, each one making you think, with a shudder, ‘Of course—but who would have thought of that?’ This stand-alone novel makes him the all-time great of unintended consequences as well. Summerland is a masterpiece, set to be a classic—but not by any means a comfortable one.”

“A jolly romp through London in the blitz sounds like an unlikely idea for a novel, but Dear Mrs Bird is full of poignant moments that cut through the froth of its narrator’s voice … And though at times the book seems like an Evelyn Waugh pastiche crossed with a Radio 4 comedy drama, complete with hilarious misunderstandings and some dodgy dialogue, Emmy is truly charming. When her upper lip finally wobbles, the reader’s will, too … along the way she shows some grown-up insights as well as true grit … In the end, the novel’s spirit is madly winning.”

4. We Begin Our Ascent by Joe Mungo Reed

“It’s one of the indices of Reed’s talent that you hotly flip this book’s pages even when there’s not a lot going on, when it’s just another hilly day on the tour … Without pressing too hard, this novel proposes the peloton as a metaphor for marriage … This novel derives its power from its limited focus and direct language. There are no adipose, word-glutted sentences. Reed is mostly content to give us strong silk thread, absent pearls … Like a racer, Reed carefully husbands his resources in this ruthless little sports novel … Reed cuts out distractions as if they were cancer.”

5. How to Be Famous by Caitlin Moran

“…a dirty, jolly, book-length defense of teenage enthusiasm … It’s a book for someone who has yet to find out that taste is relative, cynicism is cheap, and you should only date people who are kind to you. Despite its treatment of sexual exploitation, How To Be Famous is not dark—it is a joyous, yelping novel about learning to love things without apology or irony. In service to this, metaphors careen all over the book like untrained animals, shedding and slobbering on the carpets. Nuance is lost, repetition is constant, and Moran must always have the last word, even when she’s the only one talking. But in a contest between craft and feeling, if I can’t have both, I’d take feeling every time. Moran reminds us that playing it cool is a waste of living.”

1. The Unpunished Vice by Edmund White

“White…is back with a new book-crazy memoir … the delightful thing about it is the way White’s personal adventures and omnivorous reading habits intersect. Vice is funny, sexy and continually informed by White’s eagerness to drink down physical and cultural worlds in their entirety … As Vice jumps from person to person and topic to topic, White keeps returning to the question of what makes fiction masterpieces work … ‘People interested in putting together a very restricted canon of great books don’t really like reading,’ he advises us.”

Read an excerpt from The Unpunished Vice here

“As Martin Gayford shows in his superb survey of British painting from 1945 to 1970, London—almost exclusively—became the gathering place for young men and women determined to make art appropriate for the new age … Gayford has interviewed many of the leading British artists of the postwar generation and, for good measure, has been painted by Freud and written books with David Hockney. These encounters have given him a great deal of verbatim comment from figures who were at the front line; he has mined it with adroitness to illustrate the shifts and movements of the period … in this wonderfully accomplished book, full of anecdotes and aperçus, there is hardly an anodyne figure. If, time and again, Gayford reinforces Roger Hilton’s observation that ‘very few artists know what they are doing,’ his mavericks made unique and gripping art as they tried to find out.”

3. I Will Be Complete by Glen David Gold

“[I Will Be Complete is] wickedly intelligent and wildly imaginative. [Gold’s] books are ripe with larger-than-life scenes you can really sink your teeth into and enjoy a good munching. That Gold is a darn gifted yarn spinner! … If there’s a fault in I Will Be Complete, it’s that Gold obsesses over his inability to feel anything about his mother’s behavior. While that may be true in his mind, what he’s produced is anything but hardhearted or unsympathetic. Instead, Gold’s memoir is once again wickedly intelligent, wildly imaginative (well, in some ways) and everything in between. Happy munching.”

4. Squeezed: Why Our Families Can’t Afford America by Alissa Quart

“…The people Quart meets are generally clear-eyed about their predicament, ‘desperately holding onto their status and trying to keep up appearances’ but privately buried in debt and constantly, corrosively worried about how they’ll survive another year or another month … It all adds up to an almost smotheringly bleak picture of an America in which a two-income middle-class household can no longer afford to have children … it’s easy to agree with the stunned, exasperated sentiment of everybody in this book: It wasn’t supposed to be this way.”

5. How Did Lubitsch Do It? by Joseph McBride

“McBride, one of our foremost film historians, the author of solid, well-informed books on Welles, Ford, Frank Capra, and Steven Spielberg, has taken up the cudgels for his favorite master of sophisticated comedy … [An] excellent, authoritative book—which offers all the necessary points to be made about Lubitsch, is chockful of cultivated insights and astute quotes, and is even forthright about his subject’s clinkers—with a lament.”