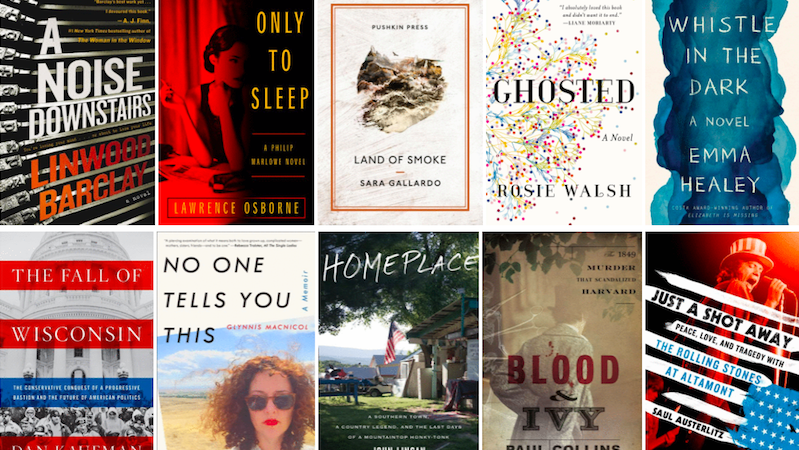 Featuring the return of Philip Marlowe, the Conservative conquest of Wisconsin, tragedy at Altamont, and more

1. A Noise Downstairs by Linwood Barclay

“Elements that are in play are somewhat visible to savvy thriller readers, and the novel echoes a classic movie from the 1960s. Proving that Barclay is a master of manipulation, he pulls a genuinely unexpected twist that throws everything revealed up to that point entirely out the window. This thriller then kicks into high gear as it becomes a race for answers and justice. The author has cast this novel with a group of realistic characters that add to the festivities showcasing a grand design. Predictable becomes unpredictable in this compelling book that echoes the best of Harlan Coben.”

2. Only to Sleep: A Philip Marlowe Novel by Lawrence Osborne

“Like all great gumshoe novels, there are cavernous depths there that only look shallow from the surface … It’s the kind of book where, when you read it, it turns the world to black and white for a half-hour afterward. It leaves you with the taste of rum and blood in your mouth. It hangs with you like a scar.”

3. Land of Smoke by Sara Gallardo, Trans. by Jessica Sequeira

“It is tempting to file the remarkable stories in Sara Gallardo’s Land of Smoke under ‘magic realism’ and close the drawer. But that would be an incomplete reading of the collection and a misreading of the genre, an elastic label that offers a rather easy recipe for critics—have people; add wings. Which is not to say Gallardo’s fiction has no wings … Read them sequentially and they accrue something more than magic, they radiate a marvelously strange mythopoetic intensity. The book is a bible.”

“A perfectly paced domestic drama centered on two lovely, lonesome people, Ghosted is a brilliant debut novel that explores the power of fate. Writing like a British cousin of Liane Moriarty or Maria Semple, Walsh has a gift for blending complex characters, intricate backstories, and neck-snapping plot twists.”

5. Whistle in the Dark by Emma Healy

“The writing will make readers feel like everyone is a little insane … Healey’s skill as a writer is laudable for the way she manipulates the English language so that words and the meanings attached to them suddenly become slippery … Whistle in the Dark is not to be missed.”

1. The Fall of Wisconsin: The Conservative Conquest of a Progressive Bastion and the Future of American Politics
by Dan Kaufman

“Lest the grandiose subtitle deter you, Kaufman delivers a highly readable, thoroughly engrossing report on how conservative activists and corporate lobbyists are using the Badger State as an incubator for a radical demolition agenda to be used across the nation … Kaufman recounts Progressivism’s faith in government, specifically its ability to promote the collective good while protecting the citizenry from corporate exploitation. A fusion of native and immigrant respect for air, land, water, and humanity created a political gospel that sustained Wisconsinites for over a hundred years. And that approach infused American social legislation throughout much of the 20th century.”

2. No One Tells You This: A Memoir by Glynnis MacNicol

“She dryly articulates the way single women in their late 30s come to think of their lives as ‘a shifting math problem,’ an experiment in how little time can be allowed to elapse between meeting a man and having a baby … Drawing this contrast between her mother’s life and her own feels like a throwback to an older generation of feminist stories, of 1970s daughters rebelling against 1950s values, but it’s a reminder of how those domestic pressures linger.”

3. Homeplace: A Southern Town, A County Legend, and the Last Days of a Mountaintop Honkey-Tonk by John Lingan

“Lingan’s book is not a polemic and it’s not a gimmick … He often conjures the place and its people with novelistic detail, saying a lot with a lyrical little … You end Homeplace thinking that every American town could use a book like this one written about it; every town could afford to be this lovingly but critically seen. Like many of the best country songs, the book is sentimental in a way that makes you wonder why sentiment is such a dirty word.”

4. Blood & Ivy: The 1849 Murder That Scandalized Harvard by Paul Collins

“With the rigor of a historian and a novelist’s eye for detail, Collins constructs a mesmerizing account … Combining elements of a police procedural, a legal drama, and a comedy of manners, Collins adroitly explores the characters immersed in the tragedy and their tangled relationships … This is a fine mixture of true crime, historical exposition, and class conflict in mid-19th-century American history.”

5. Just a Shot Away: Peace, Love, and Tragedy with The Rolling Stones at Altamont by Saul Austerlitz

“He dissects the disastrous plan to have the Hells Angels police the 300,000 people at the free concert, and to pay them in beer. He dives into the brutal, virulently racist culture of the Angels and their uneasy alliance with the counterculture. He marvels that the Grateful Dead, the band largely responsible for hiring the Angels in the first place, managed to erase their role in whole debacle, starting with their decision to scamper away and refuse to play their set … But the book’s beating heart lies with Hunter and his family.”

Read an excerpt from Just a Shot Away here