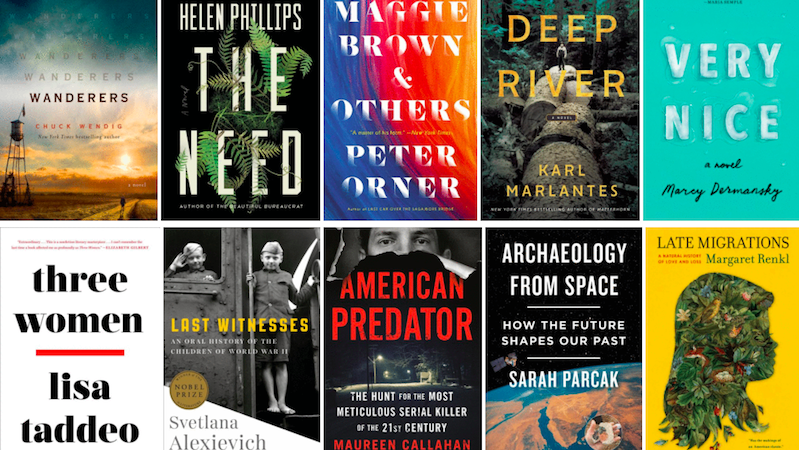 Chuck Wendig’s dystopian tale of a sleepwalking epidemic, Lisa Taddeo’s chronicle of sexual desire and despair, and Svetlana Alexievich’s oral history of the children of WWII are among the most critically-acclaimed releases of the past seven days.

“A dystopian, apocalyptic novel that comfortably occupies a space between horror and science fiction, Wanderers is full of social commentary that digs into everything from global warming to racial tension, while never preaching or bogging down the action-packed story … Wendig is extremely political, but science is at the core of his story; the discussions his scientists have are based on real events, and that makes everything feel uncomfortably plausible … covers a lot of terrain. Small personal narratives of survival, trauma, and loss fill its pages and serve as cohesive elements to hold the apocalypse together. But from time to time, Wendig delves into the most horrific aspects of a pandemic and offers chilling passages packed with poetic brutality that show readers what could happen to us at any moment … engaging and entertaining. It’s uncomfortable to read, but also a timely novel that demands a place in the spotlight. Wendig takes science, politics, horror, and science fiction and blended them into an outstanding story about the human spirit in times of turmoil, claiming a spot on the list of must-read apocalyptic novels while doing so.”

2. The Need by Helen Phillips

“Molly believes herself ‘immobilized by what-ifs,’ but the what-ifs animate this novel, the narrative splitting and looping back on itself as it tries out parallel possibilities, various fantasies and nightmares … Phillips favors a succession of rapid-fire chapters, some only a few sentences long, and at several points the timeline breaks up so that each new section requires a significant recalibration. The reader, trying to keep track of the chronology, trying hard to make sense of it all, feels the full force of Molly’s panic, the unruly runaway velocity of her life … Like parenthood itself, The Need is frightening and maddening and full of dark comedy … Phillips, as careful with language as she is bold with structure, captures many small sharp truths. She is very good on drudgery and tiredness and marital resentment … may well mystify nonparents … Everyday life, here, is both tedious and fascinating, grotesque and lovely, familiar and tremendously strange.”

Read Helen Phillips on body image, motherhood, and owning your idiosyncratic self, here

3. Maggie Brown & Others by Peter Orner

“Peter Orner has the unique ability to invent fully-formed, vibrant characters within the shortest of stories. The author’s latest collection, Maggie Brown & Others, is an exuberant body of such carefully crafted characters … Their stories—little windows through which we view a snippet of their day—are often plotless, but plot feels unnecessary when we are engrossed by the thoughts and feelings of the characters. Orner’s characters are unapologetic and complex, holding guilt, fear, and love … Orner’s impressive stories are also peppered with visceral language … full of nuance and a special kind of lightness.”

“The characters in Deep River are grounded in work, and Mr. Marlantes conveys the elements, arcana and dangerous romance of logging superbly. His descriptions of logging itself—the ingenious mechanics of taking down trees and the skill of experienced loggers—are wonderfully detailed, dramatic and exhilarating … Mr. Marlantes’s graphic portrayals of the devastation that indiscriminate logging brought to old-growth forests, the pitiless exploitation of loggers who labored from dawn to dusk, and the ghastly injuries they suffered are vivid and sickening. On the other hand, an overall sense of the country’s vigorous, can-do attitude in the first decades of the 20th century is palpable … Mighty physical, social and economic forces operate the plot of this novel, buffeting its characters, raising them up, flinging them down, twisting their fates together. Deep River is a big American novel, akin to Annie Proulx’s Barkskins and, to an extent, Ken Kesey’s Sometimes a Great Notion.”

“Watching these not-so-nice oddballs orbit one another is like rubbernecking an accident—an oh-God-oh-no marvel … Dermansky has cultivated a style marked by humor so dry it threatens to ignite on the page. The assured deadpan prose belies the characters’ chaotic inner lives. It’s a precarious balance, but Dermansky uses deft plotting and absurdist ironies to both shock readers and probe psychological nuances … Very Nice is a wickedly fun and emotionally potent farce about the often-frustrating fluidity of our relationships to one another and ourselves. Along the way, Dermansky skewers Wall Street and the Iowa Writers Workshop…but her real battleground is the beating heart.”

“… a battle cry too, and likewise a lullaby and a lyric deposition on that subject usually hovering right next to sex: desire. Madonna made you want to dance. Taddeo makes you want to feel … The three women in the book happen to be straight, white and living above the poverty line. Despite this, Taddeo uses their experiences to raise many questions that aren’t, at least in the abstract, confined by sexual identity, ethnicity or socioeconomic status … Taddeo never judges. She doesn’t slip into pseudopsychological frameworks for sex. She inhabits her subjects. And if you think her topic sounds a little louche, or isn’t quite your thing, the true magic of this book may lie less in the subject matter and more in the style. The illusion Taddeo creates is that there actually is no journalist at work here–no author, no thesis. She’s an apolitical messenger channeling her subjects’ potentially contentious perspectives. It’s the literary brilliance of the book that will knock you back–how she channels these women’s voices through her own … For anyone who thinks they know what women want, this book is an alarm, and its volume is turned all the way up.”

2. Last Witnesses: An Oral History of the Children of World War II by Svetlana Alexievich

“Oral history is an important research tool, but it has not often been treated as literature … Alexievich transforms the genre, turning it into literature through her editing and orchestration. That word is not idly chosen; there is a distinctly musical flow to the way she groups speakers and subjects … Her speakers echo one another’s experiences at points, although they sharply split off at others, and their personalities can emerge with startling clarity … recollections are so deeply etched that they appear uncorrupted by passing time; in them their protagonists are forever children … the horror and misery seldom let up. The memories, often recounted in fastidious detail, are wildly sad one by one and emotionally overwhelming in aggregate. The book is guaranteed to leave any reader a sodden mess. If the most nightmarish recollections do not summon tears, those will be brought forth by the instances of kindness.”

3. American Predator: The Hunt for the Most Meticulous Serial Killer of the 21st Century by Maureen Callahan

“… riveting, propulsive … an outstanding account of a serial murderer’s methods and the frantic, conflicted investigation into his crimes … Callahan recounts the story with a deft touch, blending multiple sources, including his court psychological profile, into a seamless narrative … Gripping and superbly researched, this is destined to be a true crime classic, alongside titles such as Vincent Bugliosi’s Helter Skelter.”

4. Archeology From Space: How the Future Shapes Our Past by Sarah Parcak

“… full of evocative anecdotes and personal insights gleaned from years of experience in dusty trenches as well as behind the computer screen, poring over satellite images … [Parcak] introduces readers to the field of aerial remote sensing through numerous case studies, turning complex research into something much more approachable … very candidly includes the occasional failure, reminding us, and herself, that setbacks and disappointing results are part of scientific exploration … Parcak’s love for her work and the people she studies is evident, and her enthusiasm is contagious. From Vikings in Iceland and Canada to amphitheaters in Italy and back to her first love, pharaonic Egypt, she brings both the present and the past to life.”

5. Late Migrations: A Natural History of Love and Loss by Margaret Renkl

“Telling stories is in [Renkl’s] bones, but those stories are just one part of this unusual book. Dated passages function like bits of memoir, snippets of her life: recalling romantic love, her mother’s depression, her father’s cancer, her own health scares. Those parts will wholly please readers, but Renkl is also a fine observer of the natural world … Renkl deftly juggles the two disparate threads of narrative, all of which is shot through with deep wonder and a profound sense of loss. It is a fine feat, this book. Renkl intimately knows that ‘this life thrives on death’ and chooses to sing the glory of being alive all the same.”