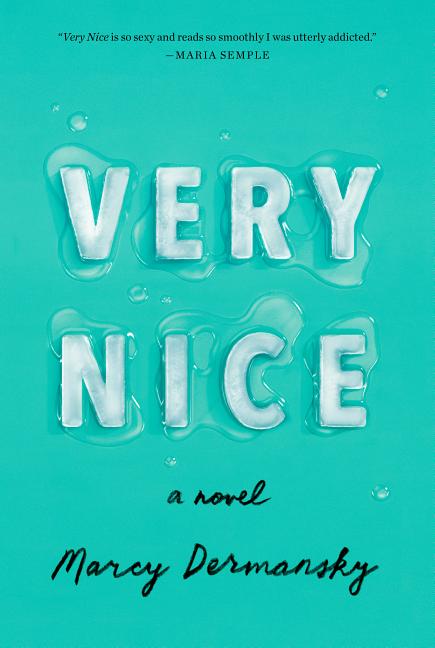 Zigzagging between the rarefied circles of Manhattan investment banking, the MFA programs of the Midwest, and the private bedrooms of Connecticut, this novel centers on a wealthy Connecticut divorcée, her college-age daughter, and the famous novelist who is seduced by them both.

What The Reviewers Say
Rave Michelle Hart,
The Oprah Magazine
Watching these not-so-nice oddballs orbit one another is like rubbernecking an accident—an oh-God-oh-no marvel ... Dermansky has cultivated a style marked by humor so dry it threatens to ignite on the page. The assured deadpan prose belies the characters’ chaotic inner lives. It’s a precarious balance, but Dermansky uses deft plotting and absurdist ironies to both shock readers and probe psychological nuances ... Very Nice is a wickedly fun and emotionally potent farce about the often-frustrating fluidity of our relationships to one another and ourselves. Along the way, Dermansky skewers Wall Street and the Iowa Writers Workshop...but her real battleground is the beating heart. ﻿
Read Full Review >>
Positive Rumaan Alam,
The Washington Post
With a story of sex and intrigue set amid rich people in a beautiful house with a picturesque swimming pool, it is, indeed, a good book to pack for your vacation. But maybe it’s more than that ... It’s to the author’s credit that this mother-daughter love triangle is considerably less icky than it sounds ... The plot is nominally about whether Zahid and Becca will become lovers and how this will affect Rachel. But Very Nice contains many story lines and a whole cast of characters, almost like a stage farce ... Each chapter moves the central story forward but is also a digression ... the brisk pacing and economical style are seductive and keep the reader’s attention ... What will happen at this house in Connecticut, and the attendant themes of family, sex and marriage, are conveyed in a distant, affectless way. This isn’t minimalism, not really; the narrative has the sound and feel of anecdote, or maybe more appropriately, fairy tale ... Dermansky manages to resolve what ultimately becomes a pretty crazy plot, while keeping the novel’s aims opaque. It’s only on the final page that those become somewhat clearer. And yet, Very Nice is not a text that reveals itself at the last minute as metafiction or parable ... It’s not a trick, with the reader as its patsy, and though very funny, it’s not a joke at the reader’s expense.
Read Full Review >>
Positive Seija Rankin,
Entertainment Weekly
This darkly funny book vies to answer the age-old question 'Just how huge is our collective appetite for tales of male novelists behaving badly?' Dermansky uproariously follows a Great Literary Man as he’s seduced by his college pupil — and her recently divorced mother— against the backdrop of a wealthy Connecticut enclave.
Read Full Review >>
See All Reviews >>
SIMILAR BOOKS
Coming Soon