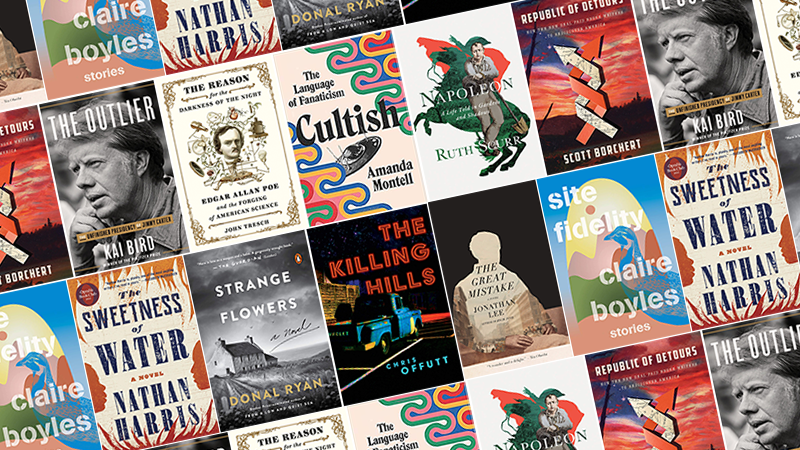 Jonathan Lee’s The Great Mistake, Kai Bird’s The Outlier, Nathan Harris’ The Sweetness of Water, and Ruth Scurr’s Napoleon all feature among the Best Reviewed Books of the Week.

“…a novel so comprehensively steeped in American literary history that it comes as something of a surprise to find that its author is a fortysomething from Surrey. It’s as if Lee…has distilled more than a century of American letters into a single book. There’s Fitzgerald … There’s Hemingway in the muscular lyricism of the prose; Sherwood Anderson and Steinbeck in the beautifully drawn portraits of rural America; there’s the restraint of Henry James in the sinuous sentences; and then there’s a host of lesser-known writers who took for their subject turn-of-the-century New York and the riotous excesses of early capitalism: Theodore Dreiser, Frank Norris and Upton Sinclair … a book of extraordinary intelligence and style, written in language at once beautiful and playfully aphoristic. It’s a novel whose protagonist—decent, dignified, wounded—will live long in the mind of those that read it, a novel that delivers wholeheartedly on Lee’s early promise.”

“This debut, a collection of connected stories set in the American West, offers a wonderful, meaningful experience to readers … The stories rise above on multiple levels: rich settings both integrated and essential, compelling characters navigating life’s most formative crossroads, the tapestry effect of skillfully woven elements, and emotional intelligence in breathtaking spades … Boyles both respects the intelligence of her reader and brings heart and soul to the page.”

3. The Sweetness of Water by Nathan Harris
(Little Brown and Company)

“.. paints a timeless portrait of warring factions seeking peace. … Harris draws readers into this sense of longing by exploring silences: George’s meditative hunts, Landry’s muteness, Caleb’s hidden trysts, Prentiss’ pent-up anger and Isabelle’s secluded mourning. Insinuating dialogue, delivered with eloquent Southern reserve, and hostile eruptions between the Walker household and the Confederates explore the flip side of silence … Celebrating all manner of relationships that combat hate, this novel is a hopeful glimpse into the long legacy of American racial and civil tensions.”

“… slim, quietly powerful … The working out of the sadness and secrets of this little family is beautifully done, poignant rather than depressing, and ending on a sweet note. As in his past work, Ryan’s prose is a miracle of fluidity, of country talk flowing in and out of people’s thoughts, capturing the rural Irish soul in its whole essence as brilliantly as any writer ever has.”

–Katherine A. Powers (The Star Tribune)

“A taut, gripping thriller, it also draws us deep into the lives of its troubled characters with wit, compassion, and insight … The same knack for propulsion, characterization, and snappy dialogue that made Chris Offutt a natural for Hollywood are on ample display in The Killing Hills. The sentences and chapters are crisp and crackling, the mood and tone dark and ominous but not devoid of humor. Put simply, the man knows how to keep the pages turning … The result is a novel that, like fine Kentucky bourbon, goes down easy and leaves a long, lingering burn.”

1. Napoleon: A Life Told in Gardens and Shadows by Ruth Scurr
(Liveright)

“An elegant prose stylist, Scurr is above all a fabulous historian, and a vivid storyteller with a novelist’s eye for engaging detail. With the exception of the Battle of Waterloo—the most significant fighting of which took place over a garden at Hougoumont—the wars in this book occur largely offstage. Napoleon emerges not in his warrior guise but in his full humanity … History’s palimpsest emerges in these pages too, through Scurr’s accounts of modern-day places shaped by Napoleon’s vision: while his empire is the stuff of history books, his legacy as a landscape genius endures.”

Read an excerpt from Republic of Detours here

“…a dynamic and discriminating cultural history that speaks to both readers who know something about the project and those who don’t. Like the American Guides these Depression-era writers worked on, Borchert’s book teems with colorful characters, scenic byways and telling anecdotes; his own writing style is full of ‘verve’—the much prized quality that so many of the guides themselves possessed … Borchert also makes a timely case for viewing these guidebooks—assembled in part out of the narratives of formerly enslaved people and histories of ‘economic struggles’—as presenting a ‘multitudinous’ national story that was directly at odds with the Euro-centric, ‘whites only’ one cherished by nativists.”

3. The Outlier: The Unfinished Presidency of Jimmy Carter by Kai Bird
(Crown)

“Kai Bird’s landmark presidential biography of our 39th president, The Outlier, begins, almost lyrically, by recreating the world in which Jimmy Carter grew up … Bird is able to build a persuasive case that the Carter presidency deserves this new look … Curiously, Bird’s story […] does not create an overwhelming sense of Carter as a tragic, misunderstood president. Instead, his narrative engenders as much impatience with Carter as respect … Kai Bird’s important book intentionally, and inadvertently, explains why American presidents continue to learn as much from President Carter’s mistakes as from his many achievements.”

4. The Reason for the Darkness of the Night: Edgar Allan Poe and the Forging of American Science by John Tresch
(FSG)

“Tresch packs quite a lot into his book—there’s even an ingenious deconstruction of the title page of Poe’s nautical novel, the macabre and tantalizingly enigmatic ‘Narrative of Arthur Gordon Pym of Nantucket.’ Still, prospective readers of The Reason for the Darkness of the Night should be aware that it isn’t a sustained, detailed exposition of Poe’s life so much as a rich assemblage of biographical vignettes, brief story analyses and mini-essays on the era’s scientific beliefs. In general, Tresch’s overall thesis—that Poe’s ‘deep familiarity with science was the fulcrum on which his thought balanced’—seems unarguable, given the presence of the ‘ratiocinative’ in so much of what he wrote. Yet, ultimately, it is Poe’s other aspect, his ability to convey monomaniacal intensity, verging on hysteria, that we are drawn to, his gift for expressing what D.H. Lawrence floridly called ‘the prismatic ecstasy of heightened consciousness.'”

5. Cultish: The Language of Fanaticism by Amanda Montell
(Harper Wave)

“Montell demystifies this twisty language into something readers will recognize, whether it’s being employed to manipulate or to motivate … Reading Montell is like a satisfying chat session with your bestie—albeit one that focuses on obsession, language tricks, and manipulation. Her personal connection to the topic is compelling, as we learn of her father’s teen experience living in Synanon and her own disturbing brush with Scientology. Cultish will have huge appeal for those who have been listening to the podcasts The Dream or American Rehab, or watching The Vow. Montell’s masterful translation of our need to belong will mesmerize.”