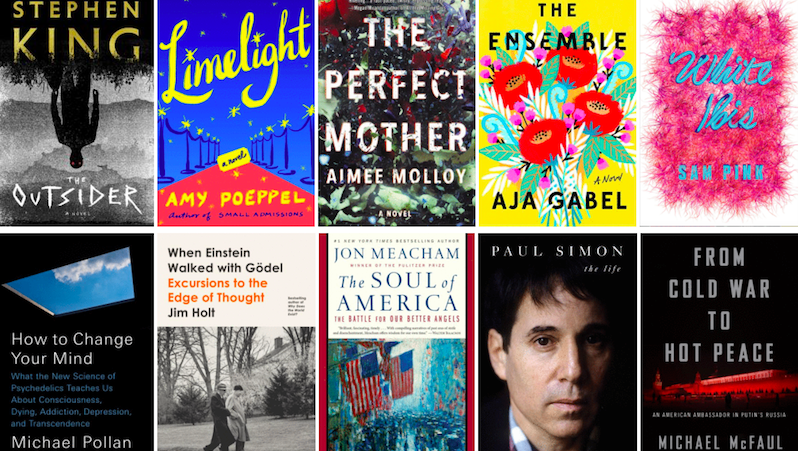 Stephen King’s monstrously good new horror novel, The Outsider, tops the Best Reviewed Fiction list this week, ahead of Amy Poeppel’s funny and big-hearted Limelight and Aimee Molloy’s addictive kidnapped child thriller, The Perfect Mother. On the nonfiction side, Michael Pollan’s “elucidating and enthralling” examination of the science of psychedelics, How to Change Your Mind just about edges out When Einstein Walked With Gödel—a fascinating collection of collection of essays on some of the game-changing ideas of in philosophy, mathematics, and science—and The Soul of America—Pulitzer Prize-winner John Meacham’s deeply-felt chronicle of the moral struggles of the nation. 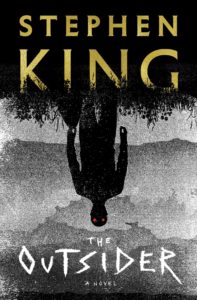 1. The Outsider by Stephen King

“Monsters of one kind or another are what the man does best, and The Outsider delivers a good one … He could easily churn out ‘monsters in Maine’ tales until his life ends, and he’d remain well compensated for it. But he doesn’t do that. He isn’t writing mere imitations of himself. More than 50 novels published, and he’s still adding new influences to his work. I can think of a great many literary writers who are far lazier about their range of inspirations and interests. This expansiveness allows King to highlight the idea that whether we’re talking about Mexico or Maine, Oklahoma or Texas, people the world over tell certain stories for reasons that feel much the same: to understand the mysteries of our universe, the improbable and inexplicable … here’s to the strange and to Stephen King. Still inspiring.”

“The story of how Allison gets that gig is a big stretch, but the hilarity that ensues between her and Carter makes it worth it. Poeppel describes the spoiled pop prince perfectly. Even her choice of curse words feel lifted off the pages of a teen’s Instagram account. This authenticity and the way Allison creatively deals with Carter’s tantrums will have readers rooting for her as she tries to get him away from the dark side and to his Broadway rehearsals … Written with heaps of humor and just as much heart, Limelight is a testament to the transformative power of good mothering, the magic of the stage and the allure of Manhattan—even if you arrive in a Ford Explorer with Texas plates.”

3. The Perfect Mother by Aimee Molloy

“The Perfect Mother is that perfect blend of breezy plotting, chilling subject matter, and addictive interpersonal drama that makes for what I like to call ‘popcorn reading’: an utterly addictive, can’t-get-enough kind of read … The Perfect Mother no doubt delivers a story of motherhood that will resonate with women who themselves have children and have faced up to the societal and personal pressures this entails, but it will also appeal to readers looking for a book that is just plain fun and addictive to read.”

–(Crime By The Book)

4. The Ensemble by Aja Gabel

“…[a] stunningly resonant debut performance. Her novel runs the gamut of human emotions, from envy to sorrow, joy, pain, terror, and frustration … With remarkable assurance, Gabel takes the four through their shaky early performances and expertly ties their individual and collective lives together with generous doses of empathy … A virtuoso performance.”

“The Garbage Times is an homage to the randomness of life, the inevitability of shit, scum, and death, and the beauty that glimmers amid the filth … In counterbalance to the crassness and moments of violence that punctuate The Garbage Times, Pink’s narrator shows a deep, humanizing love and respect for women and animals … the beauty of Pink’s work—he shows the simple devastations of containment, of beings…living without dignity but still striving toward hope, over and over again, as we all do, wanting things to come out all right. This is the heart of his message, the essence of his book: we will never stop trying to keep moving no matter how confined we are … In this quest for life and dignity is an equally powerful desire to succumb to death. Its inevitability curls underneath each page, hides in each scene. Morbid readers will really dig this book … His stories are unique and true and impossible to put down—what more could anyone want?”

1. How to Change Your Mind by Michael Pollan

“It’s a rare take on psychedelics that does not come dressed up in a cheesy colorful montage and backed by the sounds of the Doors and Jefferson Airplane. Pollan takes his time to show what LSD and 5-MeO-DMT (also known as ‘The toad,’ smoked venom of the Sonoran Desert toad) can actually do: He reaches for enlightenment, and drags us along for the ride … the most important thing Pollan does in this book is describe deeply his personal experiences of psychedelics in as relatable a way as possible … How to Change Your Mind might not be a colorful, psychedelic mass love-in, in which we all become ‘heads,’ but a psychedelic revolution could be closer than we think.”

Read an excerpt from How to Change Your Mind here

2. When Einstein Walked With Gödel by Jim Holt

“In these pieces, plucked from the last 20 years, Holt takes on infinity and the infinitesimal, the illusion of time, the birth of eugenics, the so-called new atheism, smartphones and distraction. It is an elegant history of recent ideas. There are a few historical correctives … But he generally prefers to perch in the middle of a muddle—say, the string theory wars—and hear evidence from both sides without rushing to adjudication … Holt is an amphibious kind of writer, so capably slipping from theology to cosmology to poetry, you’re reminded that specialization is a modern invention … Part of what makes Holt so exciting is his ability to gather these disciplines under his shingle, to make their knottiest questions not only intelligible but enticing, without sacrificing rigor.”

Read an excerpt from When Einstein Walked With Gödel here

3. The Soul of America by Paul Alexander

“Meacham’s book arrives at a time when much about the American political system seems broken. People are angry, ambivalent, anxious. But Meacham, by chronicling the nation’s struggles from revolutionary times to current day, makes the resonant argument that America has faced division before—and not only survived it but thrived … Ultimately, Meacham believes the nation will move beyond Trump because, in the end, as they have shown on vital issues before, Americans embrace their better angels. This book stands as a testament to that choice—a reminder that the country has a history of returning to its core values of freedom and equality after enduring periods of distraction and turmoil … Gripping and inspiring, The Soul of America is Jon Meacham’s declaration of his faith in America.”

“Paul Simon…is a top-flight artist but not a particularly sympathetic figure. Be that as it may, biographer Robert Hilburn…really makes you want to know what makes this coolly calculating, controlling and ambitious 76-year-old singer-songwriter tick. Hilburn accomplishes this in part by focusing on the work as well as the man—song lyrics are quoted in full, with helpful explications—building a strong case for the composer … Not since Caetano Veloso’s and Dylan’s autobiographies has there been such a detailed discussion of the layered poetic process that lies behind a great song. Hilburn also offers plenty of juicy stories … As for Simon’s also precipitous marriages…Simon is less forthcoming than he is about his music, but Hilburn’s keen portrayal of a man who has even described himself as often critical, selfish and career-obsessed makes it clear why it took him three tries to get it right.”

5. From Cold War to Hot Peace by Michael McFaul

“The book strives to be a Baedeker on how we arrived at our present inflection point. McFaul succeeds, shedding needed light on the most geopolitically competitive relationship of the last 75 years and attempting to explain the ‘why and what’ of Russian interference in the 2016 presidential election … While McFaul is confident in the strength of democracy in the US, it is worth remembering that even here democracy is only as strong as the trust it elicits from the governed. Let’s hope McFaul is right.”