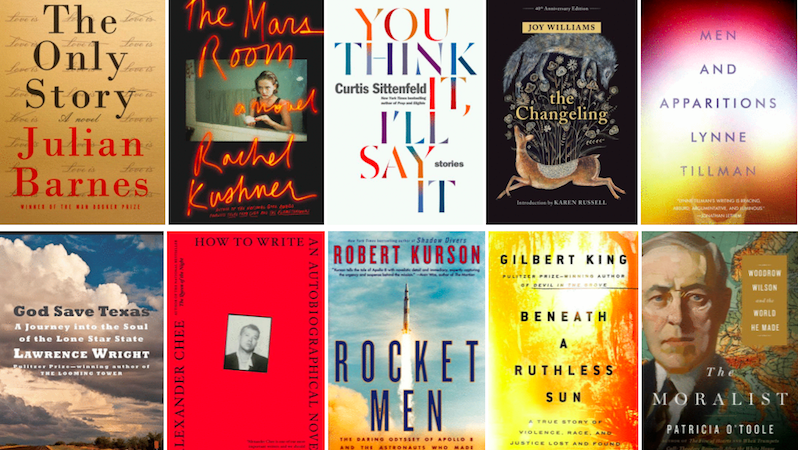 1. The Only Story by Julian Barnes

“Fans will not be surprised…to find that The Only Story — being a British teenage romance — is a perfectly accomplished book, with no missteps, inconsistencies, or obvious shortcomings. But is it any more than that? Is Barnes…just playing it safe? In terms of topic, perhaps. But not in the way that topic is handled, not in the least. The Only Story stakes bold claims and provokes surprising questions that demonstrate Barnes is anything but resting on his laurels … Paul’s love story may not be all that interesting, but Barnes’s analysis of it certainly is. As in his other works, the author applies a scalpel to human consciousness to expose his protagonist’s intentions, beliefs, and neuroses with astute observation … Each part of The Only Story possesses its unique voice and memorable descriptions. Taken as a whole, the novel provides a kind of phenomenology of love as it unfolds in human consciousness in its different stages: development, dissolution, and remembrance … At times, accomplished novelists take on fairly banal plots just so they can show what they can do with them … This is one of those plots, and — through his precise attention to the marvels of love and his perfect stylistic accompaniments to each state — Barnes has once again shown himself capable of transforming the mundane and ephemeral into the lyrical and lasting.”

2. The Mars Room by Rachel Kushner

3. You Think It, I’ll Say It by Curtis Sittenfeld

“You Think It, I’ll Say It gives sustained, compassionate attention to the middle-aged women of middle America … Her imagination is not fantastical; it is empathetic. She has a vision that ensures an inner life and a backstory that’s equally convincing for Laura Bush (whose life she borrowed for American Wife) or the parents in the carpool … That empathetic imagination is one of the defining features of Sittenfeld’s fiction, along with the unfashionable valuing of workaday family relationships over glamor or romance, and unpretentious, deprecating wit that’s never cruel — or at least never for long.”

4. The Changeling by Joy Williams

“Forty years after its first publication, The Changeling feels at once unprecedented and eerily familiar. Readers who discover it in 2018 may be surprised to feel a primordial déjà vu; a tingling where their own antlers might have been, once upon a time. Every great book shape-shifts with its reader. The Changeling does something wilder still: it generates its own autonomous magic, one that feels wholly independent of the reader and her moment. Critics get a little nervous, I think, when their breath fails to fog up the glass. But The Changeling is not a mirror: it’s a window. It is refreshingly, transgressively uninterested in reflecting the familiar dramas of human life, or in reproducing the conventional grammar of human thinking. The book is concerned, instead, with time’s tyranny—how we live under its sorcery, burdened by our substanceless memories while equidistant at every instant from an imaginary future … Part of the pain of The Changeling is feeling the years pass. Like no book I have read, it is illumined by the spark of life, the life that wears a thousand skins. Its wisdom is unparaphrasable.”

5. Men and Apparitions by Lynne Tillman

“The depths Tillman plumbs seem almost paradoxical to a novel so intensely focused on surfaces and photography. It’s as if Tillman is acknowledging that life is life, but the active life occurs in the interface with the mind … Men and Apparitions is a loose and beautiful baggy monster of a novel that opens in on itself like a fun house hall of mirrors. What a tremendous experience it is to walk through, never quite sure who’s who or what you’re looking at.”

Read an excerpt from Men and Apparitions here

1. God Save Texas by Lawrence Wright

“[Wright’s] omnivorous sensibility suits his latest subject, helping him to capture the full range of Texas in all its shame and glory. His new book is both an apologia and an indictment: an illuminating primer for outsiders who may not live there but have a surfeit of opinions about those who do … The book rambles far and wide, and it’s a testament to Wright’s formidable storytelling skills that a reader will encounter plenty of information without ever feeling lost … Certain readers might crave more righteous anger from someone writing about Texas, especially now, when there’s little room for agreement and plenty at stake. But Wright’s project is perspective, not conquest. In a chapter on Texas culture, he praises the work of contemporary artists who have returned to their Texas roots ‘with knowledge, self-confidence, and occasionally, forgiveness.’ God Save Texas is his vivid bid to do the same.”

“There are many pieces to the Apollo 8 story, but Kurson brings them together effortlessly. We see the human aspect of the flight from stories of the astronauts and how their families cope with the danger of the mission. We learn the engineering challenges that must be overcome. We learn the engineering challenges that must be overcome and how Apollo 8 paved the way for subsequent flights, most important the Apollo 11 moon landing on July 20, 1969. All of this is going on as America seethes and riots over civil rights and the Vietnam War. But times of trouble give way to hopes for the future. Kurson puts us in the command module as the astronauts read movingly from the Book of Genesis and on Christmas Eve as Anders takes the historic photo that astounded America and the world.”

4. Beneath a Ruthless Sun by Gilbert King

“…this book reads like a first-rate crime thriller, built on shocking plot twists and vivid characters and evidence of the darkest corners of human nature. But it’s not fiction … Beneath a Ruthless Sun reveals a story that is horrifying to read but must be remembered. Willis McCall is dead, but the racism he embodied isn’t. Jesse Daniels is still alive. This extraordinary book’s story might have begun more than half a century ago, but it isn’t history.”

5. The Moralist: Woodrow Wilson and His World by Patricia O’Toole

“Many biographies of important individuals can feel like a slog to read (including perhaps the biographies I have written). Writing as dynamic as O’Toole’s makes every one of her books a pleasure to read, no matter the number of pages. The most important value of O’Toole’s new book is its sharp-edged treatment of Wilson — severely critical of his character and policies when appropriate, praising his idealism and persistence when appropriate. Most previous biographies of Wilson border on hagiography, or shrill negativity. Most previous Wilson biographers are intelligent individuals, but one of the most egregious shortcomings has been their misplaced reliance on Wilson aide and sometimes confidant Edward Mandell House. O’Toole explains how and why House can be an unreliable source … After Wilson suffered a debilitating illness, he refused to accept his physical, emotional and cognitive limitations. Better than any previous biographer, O’Toole plumbs the depths of Wilson’s deception, interpreting the de facto presidency of spouse Edith Wilson as an immoral outrage.”