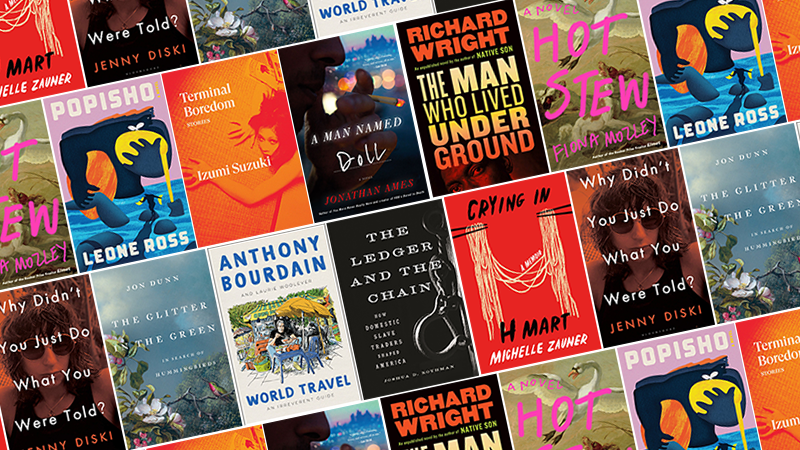 Richard Wright’s The Man Who Lived Underground, Jenny Diski’s Why Didn’t You Just Do What You Were Told?, Anthony Bourdain’s World Travel, and Jonathan Ames’ A Man Named Doll all feature among the Best Reviewed Books of the Week.

1. The Man Who Lived Underground by Richard Wright
(Library of America)

“To read The Man Who Lived Underground today is to recognize an author who knew his work could be shelved for decades without depreciation. Because this is America. Because police misconduct, to use the genteel 2021 term, is ageless. Check the copyright page, read the production notes: Yes, this was written in 1941. Yes, it’s 80 years later. Yes, Wright died in 1960, at 52, having never scaled again the commercial heights of Native Son. Yet somehow The Man Who Lived Undergroundfound its way into bookstores at the right time … To be fair, The Man Who Lived Underground, complete, does read like two different books—one brutal, one ethereal. But without the violence that sends him fleeing, Fred Daniels’ descent into the underground would be vague … a true lost gem, with echoes of Camus, Dostoyevsky, Poe.”

“With masterful prose, through over a half-dozen point-of-view characters, [Mozley] tells a story about money and power, love and art, sex work and gentrification—and those are just some of the proteins in this complex stew … There’s a lot going on in this sprawling, ambitious novel … Mozley writes convincingly about class and gender dynamics; in contrast, she writes only glancingly, skittishly about race. Precious is Black, as is at least one other point-of-view character, but in a book that takes on gentrification and sex work, the intersections of race with class and gender are left unexplored … Of course, there’s only so much one novel can do, and Hot Stew is already crowded. But if the book feels, at times, unfocused, it is also enjoyable and impressive on every page. Mozley brings Soho to clanging life.”

“Ross undertakes the task of world-building this trippy realm with tremendous gusto, wit and style. Lushly chromatic landscapes reminiscent of Ben Okri’s The Famished Road teem with tangled bougainvillea, ‘polymorphic butterflies’ and trees whose blue fruit is covered with lines of poetry … This focus brings solidity to an expansive plot as it meanders towards a dramatic climax … There are moments when fulsome description, a digressive tendency, overemphasis or repetition cause the narrative propulsion to snag … Impressively, however, Ross almost always handles the vast range of material and the multi-tonal quality of the text with an adroitness that keeps the reader involved … Ross invites us also to suspend our scepticism, to take a risk and wholly immerse ourselves in the wildness and weirdness of Popisho. This is a novel that will reward those who are able to surrender to its capaciousness and eccentricities, to revel in its oddness and delight in each surprise…provides us not merely with a welcome opportunity to enjoy a madcap, freewheeling ride through surreal and supernatural territory. It also asserts the importance of interacting with our own unpredictable world with openness, unfettered awe and wide-eyed wonder.”

“… an intimate exploration of anxiety, pain, and sadness … Even though sometimes they are ‘out of this world’ aliens or living in reimagined societies of the future, these are people struggling in the same ways we struggle today … In this collection, Suzuki’s stories are reminiscent of the unhinged science fiction dystopias of the master of the craft, Philip K. Dick … like Dick, Suzuki often leaves out concrete details in favor of ambiguity, a sense of disconnection, and a grayness between black and white truths. This vagueness projects a sense of purposeful exclusion, allowing space for the reader to fill in many missing points while preventing the narrative pace from dragging … Suzuki focuses on the character’s relationships with each other, the friendship between Emi and the narrator, the narrator and Noashi, a famous celebrity, rather than on the surrounding setting. The science fiction serves as set dressing for their humanity … Although she has been dead for a quarter century, the stories retain a contemporary quality and relevance. Suzuki is confronting issues still very much in the cultural zeitgeist. Terminal Boredom provides a solid foundation to introduce her work, and the stories extend the canon of twentieth century science fiction.”

“After only a few pages of this extraordinary thriller, the reader senses a strong, original talent at work … the story takes hold, all spare, steely sentences with an unadorned forward momentum … Moving from a stunningly written scene at the spa to a finale in which Happy is kidnapped by organ harvesters, Ames delivers an old-school L.A. crime novel that evokes Chandler with maybe an aftertaste of Bukowski. Readers expecting action won’t be let down, and the sparkling yet unpretentious language gives the whole an extra kick. Recommend to noir fans, action fans, anyone who likes a good read.” 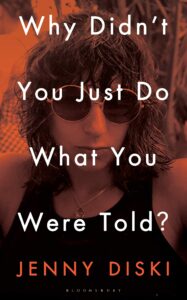 2. Why Didn’t You Just Do What You Were Told? by Jenny Diski
(Bloomsbury)

“[Diski’s] autobiographical essays are superb: A Feeling for Ice, about whiteness, psychiatric hospital and an estranged mother; Fashion As Art, about her relationship with clothes; and Staying Awake, in which she describes sleep beautifully. And I love her perkily comfortless piece about old age, However I Smell, in which she lets it be known that her hairdresser keeps saying to her: ‘Ah bless.’ She writes: ‘There are other signs that I am no longer young, but the ah-bless is the most open and public.’ Blessing Diski was an impertinence – little did these innocents know upon whom their blessings were landing. Her writing will forever remain young, funny and rebellious. And her essays – dare I say it – earn a blessing even when what they consider is cursed.”

=3. The Glitter in the Green: In Search of Hummingbirds by Jon Dunn
(Basic Books)

“… fantastically informative … [Dunn’s] excitement is contagious … braids the cultural history and daunting needs and feats of these wondrous birds with vivid accounts of the author’s sometimes hazardous, far-flung mountain, forest and island expeditions … Exceedingly well-researched and packed with fascinating lore, it should appeal to avid birders and general readers alike. Two quibbles: More informative captions on the photographs would have been welcome, including where each shot was taken. A more troubling omission is the lack of source citations for the plethora of information gathered in this volume … Mr. Dunn’s prose has the necessary sparkle to do his subject justice … Mr. Dunn doesn’t overwhelm us with facts—there is little here about hummingbirds’ evolution or gestation—but those he includes go down as easily as sugar water.”

“Woolever, longtime cowriter with the late Bourdain (1956–2018), knits together an impressive food-obsessed travel guide based on her conversations with Bourdain … but the book’s power comes from Bourdain’s joyfully combative stances […] unabashed enthusiasm, dense overlay of cinematic references, and world-weary advice […] This gloriously messy miscellany of off-kilter observations and lightning-in-a-bottle insights will make one want to read, eat, and experience the world the way Bourdain did. Bourdain’s fans will devour this.”

“… tremendous … a careful biography of a very successful business with unflinching attention to the monstrosity that business was built upon … Rothman’s book never strays far from the fact that this big business was built on forced removal, a process that entailed, for the people being trafficked, a tremendous amount of pain … distills these crucial questions to their core.”