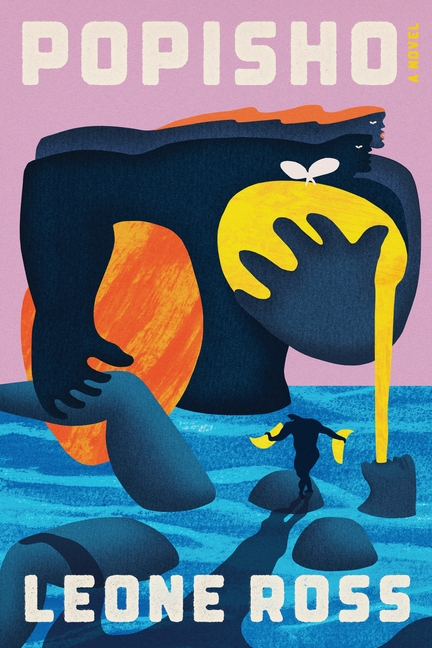 Somewhere far away―or maybe right nearby―lies an archipelago called Popisho. A place of stunning beauty and incorrigible mischief, destiny and mystery, it is also a place in need of change.

What The Reviewers Say
Rave Eowyn Ivey,
The New York Times Book Review
... fantastic ... No one will persuade me that this bold, iridescent butterfly of a story could have landed on anyone’s shoulder but Ross’s ... ubiquitous throughout the novel is sex, in all of its beautiful and frightening forms ... The book is often bawdy and unexpectedly funny ... In such a way, Ross works her own magic, transforming humanity’s worn-out suffering into something new and astonishing. Addiction becomes a dusty, thrumming moth that we can hold in the palm of our hand. With it separated from ourselves, we are able to observe its fragility, its strangeness and terrible power. Women’s complicated relationship with their own sexuality is similarly detached, set free, seen anew ... Even as Ross is dazzling and shocking us, she’s also steadily questioning who holds the power and whether they are worthy of it ... Ross’s lyrical, rhythmic writing is something to be savored ... Critics have spotted the influence of Toni Morrison, Salman Rushdie, Gabriel García Márquez and Junot Díaz in Ross’s work. In interviews, Ross has added Stephen King, Anaïs Nin, Sherwood Anderson and Roald Dahl, among others. I saw all of those influences swirling in the deep waters of this book. I was also reminded of the fairy tale realism of Helen Oyeyemi and the ecological surrealism of Jeff VanderMeer ... Despite this eclectic chorus backing her up, Ross’s voice sings out loud and pure throughout the entire novel. And while she is not afraid to call out humanity’s failings and wrongdoings, something else reigns over the story: joy. Joy in the senses, in food and love and kinship, in music, uproarious laughter and late-night parties ... At times Popisho gets a little rowdy, but Ross is like a thoughtful hostess — she’s always at your side, pointing out the best dishes, explaining the customs, introducing you to friends and enemies even as she whispers a few juicy bits of gossip about each of them. Much of it will be extraordinary and overwhelming to the senses, but you’ll find your way, and when everyone gets up to dance, you might end up tapping your foot along with the beat.
Read Full Review >>
Rave Michael Donkor,
The Guardian (UK)
Ross undertakes the task of world-building this trippy realm with tremendous gusto, wit and style. Lushly chromatic landscapes reminiscent of Ben Okri’s The Famished Road teem with tangled bougainvillea, 'polymorphic butterflies' and trees whose blue fruit is covered with lines of poetry ... This focus brings solidity to an expansive plot as it meanders towards a dramatic climax ... There are moments when fulsome description, a digressive tendency, overemphasis or repetition cause the narrative propulsion to snag ... Impressively, however, Ross almost always handles the vast range of material and the multi-tonal quality of the text with an adroitness that keeps the reader involved ... Ross invites us also to suspend our scepticism, to take a risk and wholly immerse ourselves in the wildness and weirdness of Popisho. This is a novel that will reward those who are able to surrender to its capaciousness and eccentricities, to revel in its oddness and delight in each surprise...provides us not merely with a welcome opportunity to enjoy a madcap, freewheeling ride through surreal and supernatural territory. It also asserts the importance of interacting with our own unpredictable world with openness, unfettered awe and wide-eyed wonder.
Read Full Review >>
Rave Nilanjana Roy,
The Financial Times (UK)
If you believe in magic, you must read Popisho, easily one of the most gorgeous and lavishly sprawling books of 2021. And if you don’t, Leone Ross’s third novel will at the very least convince you that enchantments lurk around the corner of our workaday lives ... definitely her breakout book ... brings together an impressively large and voluble cast of characters ... Ross also offers some juicy surrealism ... as with other aspects of the narrative, it’s left to the reader to accept this plot line as part of the strange but compelling magic of Popisho’s capacious world ... Although many readers will relish the language, rich with badinage, wordplay and terms of friendly abuse that any Jamaican will instantly recognise and cherish, Ross’s editor should have pared back the over-seasoned dialogue ... Elsewhere, Ross’s descriptions are rich with inventiveness, colour, flavour ... Ross has a gift for creating an unforgettable world, and with this book, she takes her rightful place at that table of writers.
Read Full Review >>
See All Reviews >>
SIMILAR BOOKS
Coming Soon

The Magnolia Palace
Fiona Davis
Rave
What did you think of Popisho?
© LitHub | Privacy