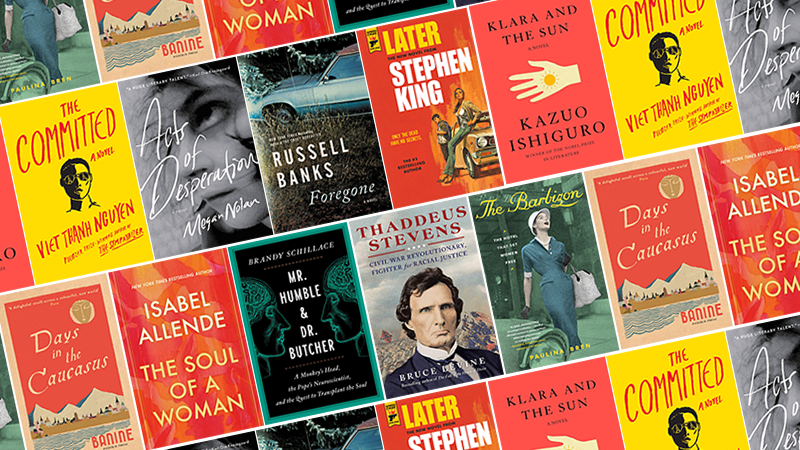 Kazuo Ishiguro’s Klara and the Sun, Viet Thanh Nguyen’s The Committed, Stephen King’s Later, and Isabel Allende’s The Soul of a Woman all feature among the Best Reviewed Books of the Week.

Read an essay on the novels of Kazuo Ishiguro here

“Readers still reeling from his 2005 novel Never Let Me Go will find here a gentler exploration of the price children pay for modern advancements … There’s a Jamesian quality to the searching, deliberate portrayal of life in Josie’s remote house. Like Klara, Ishiguro attends closely to the way apparently innocuous conversations shift, the way joy drains from a frozen smile. This is a home recovering from grief and bracing for more … Beyond the dark enchantment of this peaceful house, Ishiguro suggests a world radically transformed. Another author would have been eager to elaborate on the dystopian features of the not-too-distant era, but Ishiguro always implies, never details. One reads Ishiguro in a defensive crouch, afraid to have our worst suspicions confirmed … That’s the real power of this novel: Ishiguro’s ability to embrace a whole web of moral concerns about how we navigate technological advancements, environmental degradation and economic challenges even while dealing with the unalterable fact that we still die … Ishiguro has perfectly calibrated Klara’s uncanny tone, with a personality just warm enough and alien enough to feel like the Artificial Friend we all need … Ishiguro brings to this poignant subgenre a uniquely elegant style and flawless control of dramatic pacing.”

“…a homecoming of a particularly volatile sort, a tale of chickens returning to roost, and of a narrator not yet done with the world … Nguyen […] is driven to raptures of expression by the obliviousness of the self-satisfied; he relentlessly punctures the self-image of French and American colonizers, of white people generally, of true believers and fanatics of every stripe. This mission drives the rhetorical intensity that makes his novels so electric. It has nothing to do with plot or theme or character … That voice has made Nguyen a standard-bearer in what seems to be a transformational moment in the history of American literature, a perspectival shift … It’s a voice that shakes the walls of the old literary comfort zone wherein the narratives of nonwhite ‘immigrants’ were tasked with proving their shared humanity to a white audience … May that voice keep running like a purifying venom through the mainstream of our self-regard—through the American dream of distancing ourselves from what we continue to show ourselves to be.”

“Nolan is likely to draw facile comparisons to her brilliant compatriot Sally Rooney, whose work also turns a spotlight on power dynamics in relationships, but that move won’t do justice to the darkness in this book … Nolan’s writing gleams with dark precision. Her narrator’s piercing, almost perverse self-awareness makes the action both more sad and more urgent … Nolan performs her feminist fluency and conveys all the while a sense of fatigue, an acknowledgement that this is both new and not new. There is a sameness to all our stories. The decision to hold in suspicion the very form she is enacting is what makes the book refreshing and complex. What Acts of Desperation illuminates best is the chasm, sadly still enormous, between feminist politics and personal predicaments of love, sex and romance … The novel is a powerful counterweight to the notion that young women today are free to define themselves apart from men. Nolan shows that as long as we are grappling with ideas about women’s desirability that have been authored by men, women are in a sense realized by the male gaze.”

Read an excerpt from Foregone here

“… unfolds as a daring and deftly constructed film-within-a-novel about the ethical quagmire of deathbed confession. With even its extended flashbacks told in the present tense, as if Fife were watching these scenes from his life as he recounts them, Foregone at times feels like a film recreated in written form … a remarkable reflection on the ways that guilt, regret, narcissism, faulty memory, not knowing when to shut up, and simply running out of time shape the stories we tell at the end of our lives, and how quickly we lose control of those stories after we die.”

“Does anybody write kids-with-strange-powers better than Stephen King? And, is there anyone on the scene who has more insider knowledge of the publishing industry? Later, King’s third Hard Case Crime installment, threads both of these into a single short novel that packs a punch … King’s writing in Later is as clean, direct and evocative as it’s ever been. The short, to-the-point chapters make for quick reading, the crime-driven plot is propulsive, involving guns, drugs, bombs and kidnapping, but, more importantly, some of the lines just take your breath away. Skin ‘pebbles’ with goose bumps. A dead person confronting Jamie is ‘like a burned log with fire still inside.’ But crawling into the head and voice and life of this kid narrator is where King especially excels.”

1. The Barbizon: The Hotel That Set Women Free by Paulina Bren
(Simon & Schuster)

“Among the handful of iconic hotels closely entwined with New York’s cultural history, the Barbizon is perhaps less widely known than the Plaza, Algonquin or Waldorf Astoria. But as Paulina Bren’s beguiling new book makes clear, its place in the city’s storied past is no less deserving … Ms. Bren’s juicy sociocultural history glitters with the names and stories of talented, beautiful young women who passed through the Barbizon’s Italianate atrium lobby on their way to literary and cinematic stardom … Two institutions helped shape the Barbizon’s legacy: the Katharine Gibbs Secretarial School…and Mademoiselle magazine … Ms. Bren convincingly argues that the histories of both shed light on the history of women in 20th-century America … In considering the repercussions of Prohibition, the Depression and McCarthyism on American women, Ms. Bren occasionally wanders too far into tangential material. But one of the book’s more intriguing side stories concerns the hotel’s long-haulers, dubbed ‘The Women’ … And in this captivating portrait, the hotel comes alive again as an enchanted site of a bygone era, ‘a place of glamour, desire, and young female ambition.'”

2. Days in the Caucasus by Banine
(Pushkin Press)

“A memoir, first published in 1945 and now keenly translated from the French by Anne Thompson-Ahmadova, which spans the tumultuous period from the author’s birth to 1924. Reflecting an era of bloodshed and terror, it should be a grim read. Instead, however, this account is an effervescent and irreverent feat of recollection and imagination—epic in sweep yet intimate in tone—that introduces the reader to an exotic, antique world and to characters so vividly drawn that their raucous voices seem to echo long after they have vanished from sight … Playfully mirroring Tolstoy, Banine could be ushering us into a capacious 19th-century novel. And in a way she is. For what follows is a captivating drama of family, money, marriage and disaster that unfolds with deceptive ease and irresistible charm, thanks to the agility of a narrator who is both innocent girl and ironic observer.”

3. The Soul of a Woman by Isabel Allende
(Ballantine)

Read an excerpt from The Soul of a Woman here

“… a bold exploration of womanhood, feminism, parenting, aging, love and more … This short, but mighty memoir opens with a proud declaration that Allende has been a feminist since kindergarten, and from there launches readers into an enchanting examination of the life she has lived ever since … a chronicle of her fierce advocacy for herself and for the power of women, and it is also an ode to the many people who shaped her. With humor and wisdom, Allende offers poignant observations on topics like ambition, the lack of respect we show to aging people and the #MeToo movement … Spending time with Allende within these pages is a true delight. The book is conversational, contemplative, and relatable. Allende is self-deprecating and jubilant, writing as if she is chatting over coffee and scones with an old friend about the lessons life has taught her. The book will no doubt make you think about these big concepts in new and personal ways.”

4. Mr. Humble and Dr. Butcher: A Monkey’s Head, the Pope’s Neuroscientist, and the Quest to Transplant the Soul by Brandy Schillace
(Simon & Schuster)

“[Schillace] deftly persuades the reader to take White seriously (he wasn’t even eccentric) and to ponder profound medical-scientific-philosophical issues. Best of all, the book is fascinating … well-researched and well-written, and has its suspenseful moments. Readers might find themselves admiring and perhaps even sympathizing with White, whose attitude toward brain transplants was always motivated by a principled desire to alleviate human misery. But the book’s value lies in challenging readers to contemplate some momentous concerns. What is life? What is death? Should religion play a role in medical decisions? Should scientists experiment on animals? Can technology that saves lives still be immoral? Who gets to answer these questions?”

“… provides an anticipated and most welcome update of this anti-racist champion in the age of Black Lives Matter, falling Confederate monuments, and rising calls for transformational policy … Stevens’s path to wartime racial and economic justice pioneer was a lifetime in the making, and Levine diligently tracks his subject’s decades-long evolution, exploring key developments that other biographers have neglected … Unlike Abraham Lincoln and others, Stevens was adamant that the Confederate states had in fact left the Union. That secession was illegal, he maintained, did not mean that it had not occurred. Levine masterfully illustrates how Stevens used that fact to justify more sweeping war measures and, eventually, a transformation of Southern society … Transformed by the interracial demands of working people on the ground, the popular image of Stevens has done a volte-face since the nadir of Jim Crow. Levine’s excellent biography is both the product and culmination of that labor … exquisite.”