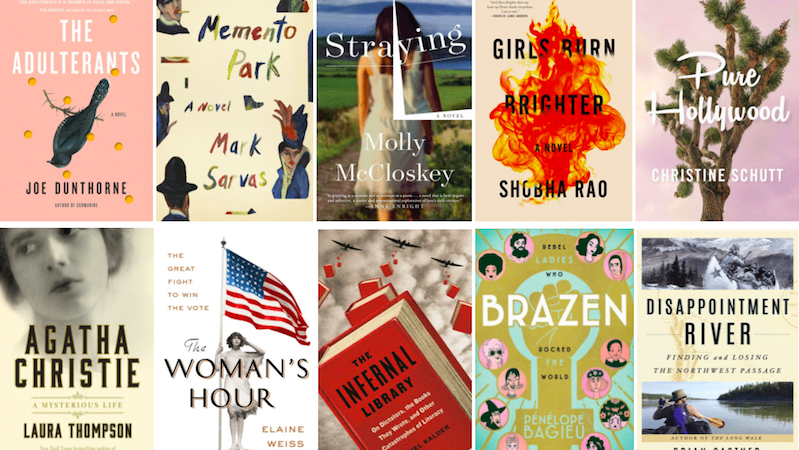 1. The Adulterants by Joe Dunthorne

“Dunthorne is a superbly economical writer – he crams an awful lot of plot into 173 pages – and one with a poet’s sensibility: a room is described as ‘uncle-scented’; a paper plate of baba ganoush is ‘smooshed’ under a shoe. He is also properly funny. There are several snort-through-your-nose moments, including Ray’s encounter with a policewoman, when his every word exacerbates his predicament. But throughout, the novel’s comedy is always balanced by insight and poignancy.”

“I took a chance on Mark Sarvas’ Memento Park and I’m elated that I did … In the end, this is a powerful meditation on the power of love, family bonds and romantic relationships … Every good book should make you want to do something like this. This is one of them.”

“Short, intense and emotionally precise … Such is McCloskey’s powerful control of the novel and meticulous, economical observations, that in little more than 200 pages she can show the exact nature of a life not wasted, but not fully inhabited — Alice ends up with no settled home as an aid worker for refugees — as well as the character of one marriage, of an affair and, not least, of the transformation of Ireland herself.

“Several of the stories are miniatures, almost vignettes. What they all have in common is a visceral, unsettling clarity that makes them stick … While Schutt is known as a stylist, she’s also a purveyor of suspense this time around. The result is that these moody, often prickly, stories can veer into unexpected territory, keeping us on our toes.”

“But derivative works and adaptations can’t fully explain why Christie’s work endures. A splendid biography by Laura Thompson, however, does. Agatha Christie: A Mysterious Life was published in Britain over a decade ago and took an inexplicable amount of time to cross the pond. Yet the timing is perfect because Thompson’s thorough yet readable treatment of Christie’s life, in combination with artful critical context on her work, arrives at the reason for her endurance.”

2. The Woman’s Hour by Elaine Weiss

“So it’s bracing to read Elaine Weiss’s stirring, definitive, and engrossing treatment of winning suffrage in America, The Woman’s Hour: The Great Fight to Win the Vote. Weiss brings a lucid, lively, journalistic tone to the story. Perhaps her greatest contribution is documenting the intricate, contentious element of racism that almost crippled the struggle. For that insight alone, The Woman’s Hour is compulsory reading. In America, as we need to be reminded over and over, it’s always about race.”

3. Brazen: Rebel Ladies Who Rocked the World by Pénélope Bagieu

“Very few cartoonists are able to convey so wide a range of emotions while also keeping their drawings so fluid, so wild – and she has charm and wit to spare. But with Brazen: Rebel Ladies Who Rocked the World, she is truly in her element. This book already feels like a classic, one to be loved by every girl who reads it from now until the end of time.”

4. The Infernal Library by Daniel Kalder

“In all, this is a mesmerizing study of books by despots great and small, from the familiar to the largely unknown … Kalder’s survey of the bizarre library of dictator literature might easily leave a reader shaken, even dejected. The badness of these books, and their effects, is almost impossible to fathom … Luckily, Kalder maintains a skeptical sense of humor throughout.”

“…goes a long way toward correcting the record of discovery in North America … Discovering history, and not just new landscapes around the next bend in the river, is one of the delights of Disappointment River. And, during a time when so many American descendants of foreign extraction rail against immigration, it’s useful to recall that all of us originated in a diaspora.”