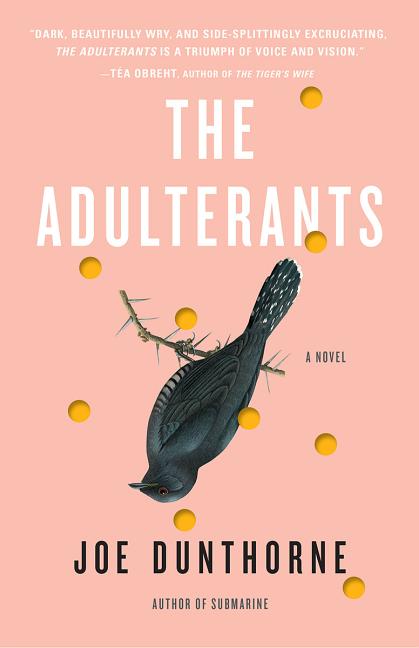 A not-very-successful thirtysomething freelance writer in London stumbles into a comedic downward spiral as he struggles to behave like an adult in response to his impending fatherhood.

What The Reviewers Say
Rave Carl Wilkinson,
The Financial Times
Just when you think things couldn’t get any worse for our roguish protagonist, things continue their downward spiral ... Dunthorne is similarly cold-blooded in his treatment of Ray, a figure you simultaneously feel empathy for, yet wouldn’t mind seeing a little sense knocked into ... Dunthorne — also a published poet — has a humorous, well-observed precision to his writing ... It makes for a slim novel (just shy of 200 pages) that feels at once entirely true to its city, characters and moment, but also a broader, wry and angry comment on our times.
Read Full Review >>
Rave Natasha Tripney,
The Guardian
Dunthorne is a superbly economical writer – he crams an awful lot of plot into 173 pages – and one with a poet’s sensibility: a room is described as 'uncle-scented'; a paper plate of baba ganoush is 'smooshed' under a shoe. He is also properly funny. There are several snort-through-your-nose moments, including Ray’s encounter with a policewoman, when his every word exacerbates his predicament. But throughout, the novel’s comedy is always balanced by insight and poignancy.
Read Full Review >>
Rave Theo Tait,
The London Review of Books
The Adulterants is a very funny comedy of arrested development ... It’s rare today to see a really talented writer go all-out for comedy, but Dunthorne makes it look like the obvious choice ... And where so many modern British novels with modern British settings founder in their attempt to wring compelling dramas out of trivial, uneventful lives, Dunthorne seems on very solid ground. What other form except broad comedy could you use to depict these pampered kidults, with their carpenters’ shirts, their fancy smartphones and their pointless jobs? ... brief and accessible, but very carefully crafted ... Readers who are allergic to irony and archness may not be impressed—the book is so arch that you could drive a horse and carriage through it—but it provides a steady flow of good gags and is, in its way, satisfyingly resonant too ... By the end, the novel has proposed an original conception of innocence; sympathy and contempt, warmth and acidity, irony and sincerity are mixed up together in surprising but satisfying proportions.
Read Full Review >>
See All Reviews >>
SIMILAR BOOKS
Fiction

Mother May I
Joshilyn Jackson
Rave
What did you think of The Adulterants?
© LitHub | Privacy