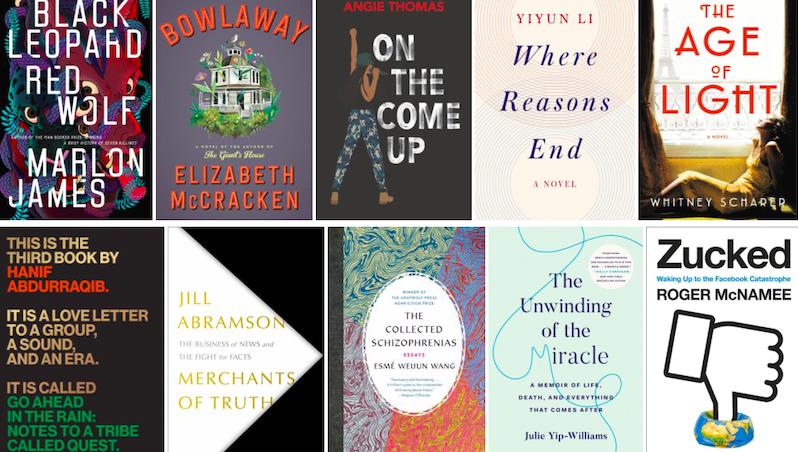 “In these pages, James conjures the literary equivalent of a Marvel Comics universe—filled with dizzying, magpie references to old movies and recent TV, ancient myths and classic comic books, and fused into something new and startling by his gifts for language and sheer inventiveness … James is such a nimble and fluent writer … Even when he is nestling one tale within another like Russian dolls that underscore the provisional nature of storytelling… he is giving us a gripping, action-packed narrative … With Tracker and the Leopard, James has created two compelling and iconic characters—characters who will take their place in the pantheon of memorable and fantastical superheroes.”

Read Marlon James’ essay, “One Day I Will Write About My Mother,” here

“… wildly entertaining … To read McCracken’s inimitably clever sentences and follow her quirky narrative twists is to be constantly delighted … There is so much life in McCracken’s prose … Even amidst much woe… it’s a joy to unravel the mysteries of these eccentric lives … Bowlaway, too, gives you something to think about besides your regrets. Under the guise of a playful portrait of three generations’ involvement with a nascent sport in small-town New England, McCracken’s novel encompasses issues of race, class, gender, and sexuality in 20th century America. Add to that the many unusual forms love takes—and death, too—and you’ve got a novel that scores big.”

3. On the Come Up by Angie Thomas

“For me…the novel’s strength lies in the way it explores the loves, fears and friendships of an African American community that is doing its best to survive under an increasingly hostile administration … This makes On the Come Up sound worthy and heavy going, but it is actually joyous and very funny. Bri often acts without thinking, with potentially dangerous consequences, but she is deeply loyal and has a great repertoire of one liners … Her friendship with Sonny and Malik is exquisitely portrayed … It is also a celebration of African American cultural achievement in music, TV and film, bursting with references that feel like a gift to readers who don’t usually see their lives represented in this way.”

=4. Where Reasons End by Yiyun Li

“[The book] may sound maudlin, but Ms. Li…is too good an artist to fall into sentimentality. With these exchanges, she captures the haunting nuances of grief, the unique aches of a mourning parent, and the ways the living struggle to hold on to the dead … But the beauty of this book is that it does not dwell in a state of gloomy interiority. It is a dialogue in which Nikolai also has a voice, and he is relentless in ensuring his mother does not indulge in clichés … Memoirs often demand something from their readers: absolution for flaws, sympathy for travails, admiration for triumphs. Novels tend to be more generous, but Where Reasons End is an especially rare work of alchemy. With this book, Ms. Li has converted the messy and devastating stuff of life into a remarkable work of art.”

=4. The Age of Light by Whitney Scharer

“Dazzling … offers a kind of transcendent ghost story, where the past never seems to leave the present’s side. [Scharer’s] narrative moves hypnotically back and forth through time and through three very different Lees … the book is so much about the difference in what we believe to be true and what is true, how a photograph can be absolute truth or manipulated … Part of the heady pleasure of Scharer’s novel is the writing, which is as seductive and beautiful as her descriptions of the shimmery satin kimonos in the opium den. Juxtaposed with that flossy Paris time is the war … An absolutely gorgeous and feminist novel about art, love, and ownership, The Age of Light’ is truly a work of art in itself, both deeply moving and thrilling.”

1. Go Ahead in the Rain by Hanif Abdurraqib

“Riveting and poetic … Adburraqib’s gift is his ability to flip from a wide angle to a zoom with ease. He is a five-tool writer, slipping out of the timeline to deliver vivid, memoiristic splashes as well as letters he’s crafted to directly address the central players, dead and living. He is a grown man, a cultural critic, an Important Voice, but he’s also an awkward kid huddled in the back seat of the school bus, that ‘Beats, Rhymes and Life’ cassette wearing out his Walkman. He brings everything to the game, whether a cosmic vignette about Leonard Cohen or an unexpected curveball that somehow morphs into connective tissue.”

2. Merchants of Truth by Jill Abramson

“It’s partly a memoir and partly a work of investigative reporting. But it’s mostly an audit of an industry that has spent much of the past decade wetting its pants in fear of digital technology and then worrying about whether to go to the dry cleaners. And it’s a damn good read … It’s the ultimate irony: Jill Abramson was, indirectly at least, fired because of her resistance to the ‘innovation report.’ And now she’s produced a marvelous book about exactly how prescient the darn thing was.”

“Wang is a highly articulate and graceful essayist, and her insights, in both the clinical and general senses, are exceptional … [Wang’s] perspective in The Collected Schizophrenias is encyclopedic and prismatic even without taking into account how her primary mental illness may have fractured her identity … [Wang] writes with clarity about how it feels when a psychotic episode descends upon her, an experience only a fraction of us will ever have … These essays are mesmerizing and at times bittersweet … The Collected Schizophrenias is a necessary addition to a relatively small body of literature, but it’s also, quite simply, a pleasure to read.”

4. The Unwinding of the Miracle by Julie Yip-Williams

“… eloquent, gutting and at times disarmingly funny … Yip-Williams writes with such vibrancy and electricity even as she is dying … This memoir is so many things—a triumphant tale of a blind immigrant, a remarkable philosophical treatise and a call to arms to pay attention to the limited time we have on this earth. But at its core, it’s an exquisitely moving portrait of the daily stuff of life … It would be nearly impossible to read this book and not take [Yip-Williams’s] exhortation seriously.”

Read an excerpt from The Unwinding of the Miracle here

5. Zucked: Waking Up to the Facebook Catastrophe by Roger McNamee

“McNamee excels at grounding Facebook in the historical context of the technology industry. Shedding fresh light on an already deeply covered story, he describes how Facebook was born when tech start-ups were suddenly no longer limited by processing power, memory and network bandwidth … While Zucked is an excellent account of the story so far, Facebook’s fate is far from sealed. McNamee admits his analysis is still more of an ’emerging hypothesis’ than a firm conclusion.”