Merchants of Truth: The Business of News and the Fight for Facts 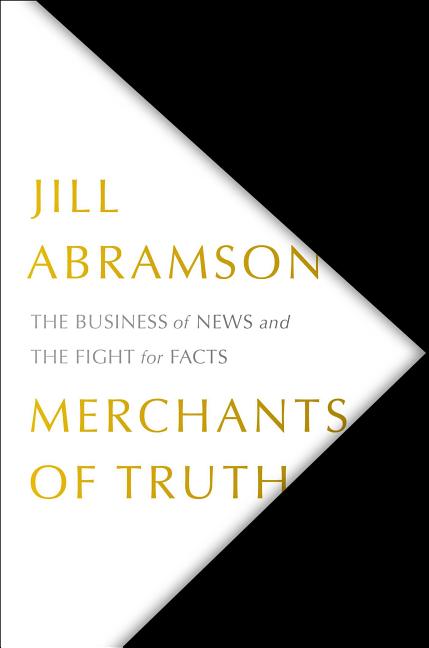 From former Executive Editor of The New York Times Jill Abramson, an examination of two legacy (The New York Times and The Washington Post) and two upstart (BuzzFeed and VICE) companies as they plow through a revolution in technology, economics, standards, commitment, and endurance that pits old vs. new media.

What The Reviewers Say
Rave Nicholas Thompson,
The New York Times Book Review
It’s partly a memoir and partly a work of investigative reporting. But it’s mostly an audit of an industry that has spent much of the past decade wetting its pants in fear of digital technology and then worrying about whether to go to the dry cleaners. And it’s a damn good read ... It’s the ultimate irony: Jill Abramson was, indirectly at least, fired because of her resistance to the 'innovation report.' And now she’s produced a marvelous book about exactly how prescient the darn thing was.
Read Full Review >>
Positive Dan Kennedy,
The Boston Globe
... a big, ambitious chronicle of the past decade ... Some have criticized Abramson for favoring the legacy newspapers over the digital start-ups. There may be something to that ... But those sections strike me as warranted and fair ... Besides, Abramson is generous in acknowledging the importance of their best journalism, including Craig Silverman’s groundbreaking work for BuzzFeed on fake news and Elle Reeve’s mini-documentary for Vice about the deadly neo-Nazi protests in Charlottesville, Va. ... Errors in galleys are common, but they generally involve typos and spelling mistakes. And not all of the problems were addressed in the final version of the book. Inaccuracies notwithstanding, Merchants of Truth is a valuable and insightful survey.
Read Full Review >>
Mixed Josephine Livingstone,
The New Republic
Abramson’s experience at the pinnacle of American journalism could make her the best person to tell this story, since she had such a good view. It could also make her the worst, since she has a personal stake in trashing certain people and organizations. In Merchants of Truth, she ends up being a little of both ... The chapters on the Times and the Post are excellent. The other chapters are not ... [Abramson’s] account of being fired in 2014 makes Merchants of Truth essential reading ... But there are errors in Merchants of Truth and, as the Twitter firestorms pre-publication indicated, they are chiefly mischaracterizations of young media professionals ... The other mistakes fall into two overlapping categories: denigrating the credentials of young journalists working for BuzzFeed and Vice and poorly researching their biographies ... If Merchants of Truth had focused on the Times and the Post alone, it would have been an excellent contribution to the history of journalism. So why did Abramson step out of her zone of expertise to profile digital media? ... What we’re left with is half of a great book, and half of a book that recommends to other late-career journalists that they take their inheritors seriously.
Read Full Review >>
See All Reviews >>
What did you think of Merchants of Truth: The Business of News and the Fight for Facts?
© LitHub | Privacy