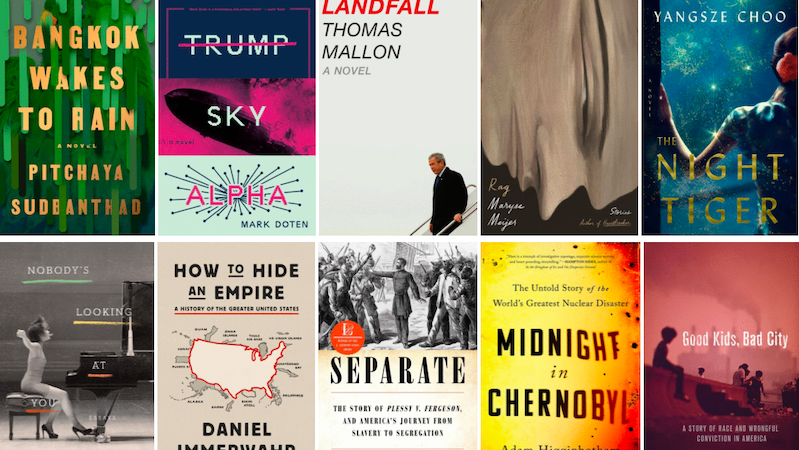 Featuring a Trumpian dystopia, investigations into Chernobyl and the U.S. Empire, Janet Malcolm's essays, and more

“Pitchaya Sudbanthad’s monumental and polyphonic debut novel is a sweeping epic with the amphibious city of the title at its scintillating center … like raindrops, these stories flow together to make a totality, a stream of narrative that floods the reader with the vibrant sense of a global metropolis whose only constant is constant change … The novel’s texture feels cinematic, but more immersive than a movie, in part because of the evocation of the scents of the setting … In the vein of Arundhati Roy, Haruki Murakami or David Mitchell, Sudbanthad’s elaborate, time-hopping saga explores class stratifications, intercultural connections and disconnections, and finely textured layers of history, all the while raising fascinating questions about the future.”

“Doten launches Trump Sky Alpha at the bull’s eye of reality with such velocity that it bursts through the other side. This is speculative fiction as burning ring of fire … The beginning is outrageous fantasy but reads like transcription. Doten channels Trump’s verbal tics and rhetorical poverty so perfectly it’s chilling … Perversely satisfying, this tour de force of vicious satire is cathartic … The stress of outperforming realism in works of speculative fiction sometimes risks a dangerous rise in the literary mercury. Both [Doten’s novel, and the novel within the story] suffer from an overreliance on facsimile screenshots and voiceyness … Dizzy with metaphor, Trump Sky Alpha is a cautionary tale for a time when we have become inured to flashing yellow all around.”

“Mallon’s knowledgeable and diamond-hard portraits of actual Washington insiders across the political spectrum, from showboating John Edwards (Mallon’s most acid character sketch) to tough-as-nails Barbara Bush (no sweet little old lady in pearls here). Nonetheless, the fact that Ross and Allie change their views based on experiences on the ground makes a refreshing—and one suspects deliberate—contrast with the dug-in positions of today’s political partisans … Marvelously detailed, often darkly funny, as informative as it is entertaining. Mallon may well be the 21st century’s Anthony Trollope.”

“With terse, dark prose, Meijer has created a cohesive set of stories which seem to delight in exploring taboos and destroying expectations … These stories are unsettlingly honest, with the most twisted inner thoughts of each principal character laid bare for the reader. Rag is at its strongest when delving into the minds of its uniformly flawed narrators … The haunting, beautifully horrific stories in Rag linger long after finishing the collection, and subtly answer almost as many questions as they raise about what it means to interact with and be a man in the modern world.”

5. The Night Tiger by Yangsze Choo

“Complex, ambitious … In less capable hands, this could feel gimmicky. But Choo pulls it off brilliantly, never once slipping into territory that feels silly or coincidental … The magic of The Night Tiger, then, is not in where or what or even who. It is in the why … Choo builds characters that are rich and nuanced, with fully imagined backstories that are revealed slowly as the story builds … a fine example of historical fiction, a work of magical realism, a ghost story, a mystery, a romance, a coming-of-age tale. Each of these is impressive, but most impressive is Choo’s ability to weave them all together in a way that feels authentic, and to use that intricate process to tell a story of colonialism and self-determination, love and death, family and tradition.”

1. Nobody’s Looking at You by Janet Malcolm

“It would be frightening to be interviewed by Janet Malcolm. But the same qualities that make her such a fearsome interlocutor also lend her essays an uncommon clarity … Malcolm brings [the] same moral seriousness to every topic she addresses … Yes, Malcolm can be unforgiving. But her calm, brilliant essays are the perfect tonic for our troubled times.”

Read an excerpt from Nobody’s Looking at You here

2. How to Hide an Empire by Daniel Immerwahr

“The book is written in 22 brisk chapters, full of lively characters, dollops of humor, and surprising facts … It entertains and means to do so. But its purpose is quite serious: to shift the way that people think about American history … Immerwahr convincingly argues that the United States looks less like an empire than its European counterparts did not because U.S. policy maintains any inherent commitment to anti-imperialism, but because its empire is disguised first as continuous territory and later by the development of substitutes for formal territorial control … It is a powerful and illuminating economic argument … the book succeeds in its core goal: to recast American history as a history of the ‘Greater United States’ … Immerwahr’s book deserves a wide audience, and it should find one. In making the contours of past power more visible, How to Hide an Empire may help make it possible to imagine future alternatives.”

3. Separate: The Story of Plessy V Ferguson by Steve Luxenberg

“The reader’s great honor and delight is to follow Luxenberg as he intertwines their stories from widely singular strands at the beginning, to their historical moments on stage together in 1896 … In explaining the lead-up to the Civil War, Luxenberg offers a clarifying analysis of the catalyzing effects of the Runaway Slave Act, particularly in the North … With this monumental work, Luxenberg shows us precisely how [our current political landscape echoes those of the past]—through the workings of malleable law.”

4. Midnight in Chernobyl by Alan Higginbotham

“… chilling … Interviewing eyewitnesses and consulting declassified archives—an official record that was frustratingly meager when it came to certain details and, Higginbotham says, couldn’t always be trusted—he reconstructs the disaster from the ground up, recounting the prelude to it as well as its aftermath. The result is superb, enthralling and necessarily terrifying … Amid so much rich reporting and scrupulous analysis, some major themes emerge … Higginbotham’s extraordinary book is another advance in the long struggle to fill in some of the gaps, bringing much of what was hidden into the light.”

“Swenson has produced a compelling, beautifully written book that goes well beyond that initial journalistic probe into a grave injustice. Good Kids, Bad City is a powerful addition to the growing literature on the failures of America’s criminal justice system, particularly in dealing with African American men. But it is also a gripping, novelistic account of what happened to the three defendants and their lone accuser after the convictions, a frank confession of the methods and emotions of an obsessed reporter, and a poignant meditation on the dark side of Cleveland and what became of that once-proud embodiment of Midwestern virtues that allowed this travesty to happen.”