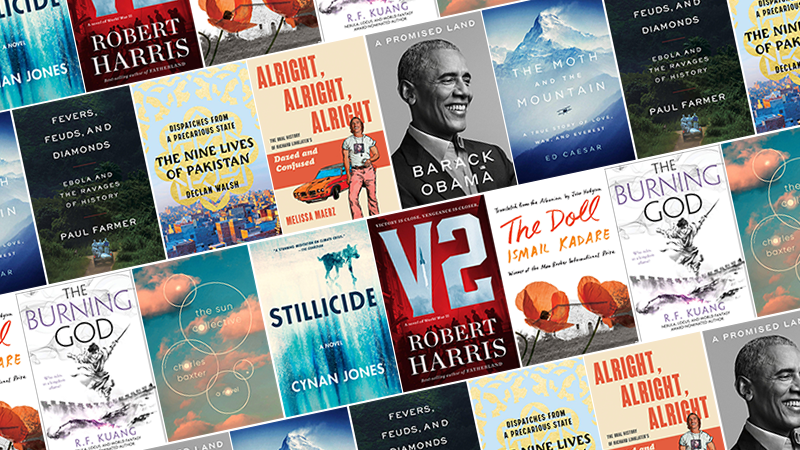 Barack Obama’s A Promised Land, Robert Harris’ V2, Cynan Jones’ Stillicide, and Ismail Kadare’s The Doll all feature among the best reviewed books of the week.

Read an excerpt from Stillicide here

“… fragmented, marvellously compressed … it is this image of dripping water and its powers of erosion that comes to define his book as a whole, both as a novel that confronts the challenge of describing what climate crisis might look like, and in the way a slow accretion of pertinent detail gathers cataclysmic momentum … has a terse, minimalist quality that is at least partly down to how the text is presented on the page. Short paragraphs and generous line spacing encouraged me to read the novel as a series of prose poems. The radical distillation of language, the sense that every word has been individually chosen, results in a blunt perfection that heightens this effect. Narrative exists, but it is secondary to form. On first encounter at least, the pleasures Stillicide offers appear to be more aesthetic than dramatic … can be added to the growing roster of powerful and urgent meditations on the future. As a tract of written language, it is close to perfect. As a repository for ideas, it is imaginative and far reaching. As a story of and for our times, it is very human, and deadly serious.”

“As so often with Harris, the joy is in the history as much as the story. There are two conspiracies in this book but…it is only when you reach the end that you realise that the author’s narrative skills have tricked you into focusing on the sideshow … more drama than thriller. For all its pace—you will zip through it in no time—the rewards are in the meta-story. But Harris’s deceptively effortless prose means you barely notice. The effect is one of total immersion: you can feel the cold, taste the bacon sandwiches and imagine the trolleys squeaking across the floor.”

3. The Doll: A Portrait of My Mother by Ismail Kadare
(Counterpoint)

Read an excerpt from The Doll here

“… Ismail Kadare’s autobiographical novel can be read as an elegant, slightly bittersweet coming-of-age memoir, touched with nostalgia for a homeplace that is now long lost … The Doll is full of compelling details of life in a changing Albania, as the citizenry come to terms with various hues of communist rule under Soviet-backed Enver Hoxha. One of the funniest accounts is of the day, in 1953, when condoms arrive for the first time in the pharmacy … The Doll is rich with such touches, alongside many of Kadare’s familiar concerns—with the folkloric roots of modern life, say, or the absurdity of Albanian politics. However, the poignant observation, bitter irony and misspoken fear running through the narrator’s central relationship with his mother, a woman secretly terrified of being disowned as unworthy the moment her son achieves the fame he so desires, are what dominate this fascinating study of a difficult love.

“In The Burning God, the third and final entry in the Poppy War trilogy, R.F. Kuang finds new ways to bring life, horror and excitement to this saga about a nation torn apart by war … Though The Burning God treads new ground in many ways, Kuang constantly references people, places and things from the previous books. Of course, this is really helpful for readers who haven’t been back to Nikan in some time, but it also creates a sense of history. All of the things Rin has done and all the people who have built her feel ever-present in her mind as she makes decisions both small and large. It also feels nostalgic, wistful even … The Burning God is the best-written book of the trilogy … This place and this protagonist are singular in fantasy literature, and I hope we’ll get to return to Nikan someday. Better yet, I hope we get to return to the future Nikan that this book promises. I’m sure the Phoenix will be waiting, ready to set the world on fire.”

Read an excerpt from The Sun Collective here

“…vividly recreates the oscillating sense of dread familiar to anyone who hasn’t spent the last four years in a coma, or in Canada … There is plenty of artful subtext in The Sun Collective, and a burning house or two. But, as with his sumptuous 2000 novel The Feast of Love (a finalist for the National Book Award), Baxter’s true gift is in describing the tender complexities of a relationship. Here, it’s the wistful, at times contentious, ‘post-love”’of Harold and Alma, whose real problem might not be the times, but time, and their own senescence and mortality … This is one of the dangers of writing fiction that aims to capture the current moment. The current moment is a slippery bugger, not inclined to wait for publishing schedules. After a summer of actual riots, of racial and social unrest over the very real and nonfuzzy, heart-rending issue of police violence against Black Americans, the simmering rebellion of the Sun Collective feels like a halfhearted thought experiment … the novel continually builds poignancy by revealing that what Harold and Alma really long for is themselves at that age, when they had the passion of those young people cavorting across the park.”

1. A Promised Land by Barack Obama

“… 700 pages that are as deliberative, measured and methodical as the author himself … This isn’t to say that A Promised Land reads like a dodge; if anything, its length testifies to what seems to be a consistently held faith on the part of the former president—that if he just describes his thinking in sufficient detail, and clearly lays out the constellation of obstacles and constraints he faced, any reasonable American would have to understand why he governed as he did … At a time of grandiose mythologizing, he marshals his considerable storytelling skills to demythologize himself … Obama doesn’t force the metaphor, but the events described in A Promised Land suggest that something very old and toxic in American politics had been unleashed too.”

2. The Moth and the Mountain: A True Story of Love, War, and Everest by Ed Caesar

“This tale of a ‘driven and defiant’ amateur and his dream is true and presented with brio by Ed Caesar … The author is a talented storyteller with a flair for detail. His subject’s absurdity is not lost on him. Yet Mr. Caesar also displays a handsome refusal to laugh at anyone’s dreams … Wilson’s story is an entry less in the annals of mountaineering than in the Book of Life. That such an extraordinary person even existed is cause for celebration … To give every detail of Wilson’s tenacious struggle upon Everest would be to spoil an outstanding book … returns readers to a romantic era when Everest was terra nova rather than an experience to be bought. It remained unvanquished. From the first page we know Wilson never stood a chance. But no one ever made a more dashing attempt.”

3. Fevers, Feuds, and Diamonds: Ebola and the Ravages of History by Paul Farmer

“…eye-opening, densely detailed, and riveting … The truth, as Farmer makes crystal clear, often with an incandescent anger that shines through even his measured words, is much different. Yes, the disease—just like coronaviruses—is spread in part through caregiving. But the base fact is this: Ebola swept through these nations in a catastrophic way more because of a history of inequality than because of viral biology … When it comes to Ebola in 2014, Fevers, Feuds and Diamonds is no armchair account … Only Paul Farmer, I think, in his ability to write so knowledgeably and with such love and hope for all of humanity, could coax me to read 526 pages of text about a viral outbreak during a viral pandemic. (Confession: I only skimmed the nearly-100 extra pages of footnotes in the back.) Farmer is modest in print, but his story (conveyed also in his previous books) is compelling. He’s worked tirelessly for decades in places like Haiti and Rwanda to aid crisis recovery and build strong public-health networks.From Farmer we learn that the world needs not only a COVID vaccine, but something much more: a rejection of global racial inequalities and an embrace of investing seriously in the care of all people.”

4. The Nine Lives of Pakistan: Dispatches from a Precarious State by Declan Walsh

Read an except from The Nine Lives of Pakistan here

“The question has confounded many: How does Pakistan stay alive? … The New York Times foreign correspondent Declan Walsh is the latest to try to answer that question. In his new book, The Nine Lives of Pakistan: Dispatches From a Precarious State, he pulls from years of contact with sources on the ground, presenting nine narratives—each given its own chapter—to paint a vivid, complex portrait of a country at a crossroads … Walsh’s writing is elegant and expressive. It does what the best foreign correspondence should: transport the reader … Every character is fighting on his or her own front line in some way … Walsh beautifully braids in brief history lessons, placing each voice in proper context and feeding a richer understanding for readers coming to the region fresh.”

“There are hookups and rivalries, oceans of alcohol and forests of weed consumed, cliques and alliances—and everyone has their own side of the story. And everyone, of course, insists they’re telling the truth. It makes for lively, sometimes cringe-y reading (the chapter about Shawn Andrews should be printed as a pamphlet and handed out to young actors with too much hubris). It’s gossipy and funny and sometimes wistful and sad, but it’s page-turning. Yes, you find out precisely where Alright, alright, alright comes from. And in true, Linklater-esque meandering fashion, you find out about odd Texas traditions like moon towers, ‘freshmanizing’ and the parking spots to avoid at the Sonic … For a film lover like me, Alright, Alright, Alright is an endless feast of facts and revelations. I’m gonna guess that for the casual filmgoer (and even someone who’s never seen Dazed and Confused) it will be fascinating just for the thrill of reading older people looking back with joy, bewilderment and sometimes anger at a time when they were not only young, but when their youth blazed. And the fire was caught on film. For better or worse, forever.”