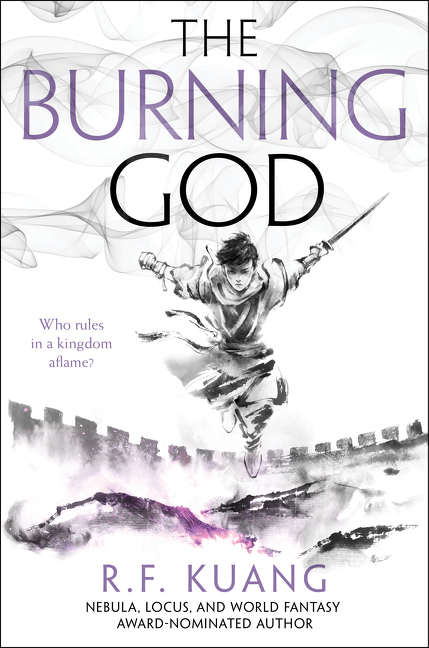 The end to The Poppy War trilogy, R. F. Kuang’s epic fantasy that combines the history of twentieth-century China with a world of gods and monsters.

What The Reviewers Say
Positive Vanessa Armstrong,
Tor.com
There’s nary a silver lining to find in The Burning God’s 560 pages, and those looking for a lighthearted book won’t find it here. What readers will get, however, is a gut-wrenching ride ... That is one of the strengths of The Poppy War books—they are at least as much about the characters as they are about the ramifications of war. Kuang, for example, is able to make us care about Rin even as she commits unforgivable atrocities ... Who is right and who is wrong is often (often, but not always) muddled in The Poppy War trilogy, and The Burning God is no exception to this. The book, however, goes beyond exploring the moral ambiguity war creates to ask whether it even matters who is ultimately right or victorious, if all that’s left at the end is death and devastation.
Read Full Review >>
Rave The Nerd Daily
You know you have read a really good book when all you can do when you sit down to write a review of it is stare at a blank document for hours, trying to remember how to make words and turn them into coherent sentences. The Burning God was one of those really good books ... Kuang doesn’t flinch away from drawing real life parallels here once again as she portrays the deep trauma of being the survivor; how even as you try to move on with your life after a war is over, the past never really stops haunting you. In The Burning God, Kuang also acutely discusses how violence has a way of recreating itself as long as dehumanising narratives are carried forward ... Kuang has always excelled at writing vividly rendered, immensely gripping battle scenes, but with The Burning God, she has genuinely outdone herself. The military strategies and tactics employed were once again compelling.
Read Full Review >>
Rave Lucy Lockley,
Booklist
Bringing her complex Poppy War trilogy to a poignant conclusion, Kuang shines a searing light on the devastating price and valiant sacrifices that warfare requires of all involved.
Read Full Review >>
See All Reviews >>
SIMILAR BOOKS
Fantasy

The Last Watch
J S Dewes
Positive
What did you think of The Burning God?
© LitHub | Privacy