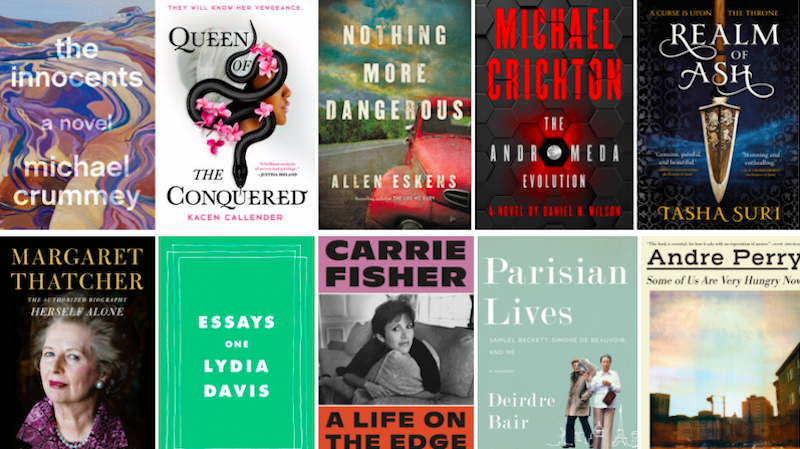 Michael Crichton’s The Andromeda Evolution, Lydia Davis’ Essays One, and Sheila Weller’s Carrie Fisher: A Life on the Edge are among the most critically-acclaimed books of the past seven days.

1. The Innocents by Michael Crummey

“Fittingly, the children’s language is blunt and old-fashioned, an earth- and sea-engaged vernacular which deepens the novel’s mood of lives wrested from nature—stud tilt, rot oil, slutlamp, coopy, cuddy, yaffles, mollyfodge, dwy, bawn—potent words from a vanished way of being … The big events in the novel are few, but are all the more momentous for that … A terrible tension runs through the book. So much is felt by these young people, so little is tamed by language or blunted by experience. This is an extraordinary novel, emotionally precise, vivid in its portrayal of nature, and subtle in its exploration of the relationship between life and story.”

Read an excerpt from The Innocents here 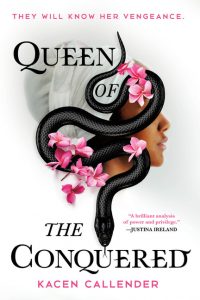 2. Queen of the Conquered by Kacen Callender

“…the author wields revenge with supernatural skill … Callender also weaves a vast, fictional backdrop that’s based on the colonial history of the Caribbean, a refreshing break from the stereotypical, pseudo-European setting of most epic fantasy. But rather than scatter its narrative across numerous characters and points of view, Queen of the Conquered effectively concentrates its entire focus on one character … Their worldbuilding is meticulous and immersive, from the texture of the foliage to the devastating backstory of colonization. But it’s Sigourney’s first-person, present-tense perspective that captivates most deeply. Morally conflicted and viscerally impactful, her voice is a thing of lean poetry … Callender’s masterful reveal of both Sigourney’s inner turmoil and the magical world within her world dovetail beautifully … it’s told in gorgeous strokes of color and emotion, rendering even the most disturbing scenes of horror and loss with haunting insight.”

3. Nothing More Dangerous by Allen Eskens

“Acclaimed Minnesota attorney-turned-writer Allen Eskens has taken a sharp turn into new territory with his latest book, a literary novel that explores racial prejudice in mid-1970s Missouri. It’s a heavy theme, but Nothing More Dangerous buzzes along with the tempo of a boyhood story that almost tells itself … The story is gripping and yet reassuring as the boys’ friendship deepens. Their summer adventures exploring the woods take on a Stand By Me quality with Stephen King-like dread around every bend … a fine mystery that involves layers of racial introspection—persecution, guilt and retribution, important lessons learned in a region where prejudice has been passed down through generations and barely acknowledged for what it is … The characters are intriguing; some you love and some you hate … Eskens tells us in an author’s note that he started this book in 1991 and kept putting it away, never quite feeling it was ready. He can proudly pronounce it ready now.”

=4. The Andromeda Evolution by Michael Crichton and Daniel H. Wilson

“Wilson has crafted many books about problematic issues surrounding robotics and technology, so it’s a bit strange that he is writing about the world of micro-organisms and viruses. But his scientific skills and background play perfectly into the narrative. He’s able to convey complex scenarios and situations and make them understandable to the non-scientist, something the late Crichton had a gift for as well. Wilson’s stellar cast of characters makes the story more than just a series of events but a tale that carries weight … The structure of the novel reads as if the reader has been granted access to a top-secret file that provides an overview of the incident, which follows the exact layout of Crichton’s classic novel. Wilson invokes the best of that story, and updates everything with terrific flair.”

=4. Realm of Ash by Tasha Suri

“.. a poignant story of finding one’s place in a world warped by prejudice, court intrigue, violence, and sorcery … Those with a penchant for lyrical prose, intricate world building, beautifully imagined characters, compelling immersive folklore, and a fascinating look into a setting reminiscent of the Mughal Empire need look no further.”

“…a scrupulously evenhanded work. His use of evidence, absorbed from vast archival sources and hundreds of interviews, is punctilious, his judgments measured, his wit dry and sympathetic, his prose classically balanced. This sonorous, authoritative biography makes no empty claim to definitiveness. But it is a work for the ages: It will be the font from which every serious appraisal of Thatcher and Thatcher’s Britain draws … Given the comprehensive approach Moore’s writ demands, this volume, like its predecessors, suffers something of a forest-for-the-trees problem. But Moore’s perspective shifts continually from Thatcher herself…to her advisers, her colleagues and rivals in the cabinet, her adversaries across the floor in the House of Commons and in Brussels, even her hairdresser. Only this cumulative approach can convey the interplay of Thatcher’s personality and outlook on history and the peculiar way she conducted politics … With this masterpiece, Moore has given us Margaret Thatcher. She now belongs to history.”

2. Essays One by Lydia Davis

“The book’s raison d’etre is not to preserve these individual pieces—though some of what’s in here is quite worth saving—it’s to elevate Davis to the office of a Great American … well, again, it’s hard to know what word to use. Let’s just agree that Davis, now 72, is an elder stateswoman of American letters … when you read [Davis] at length—these essays run to more than 500 pages—you realize just how chewy and complicated she is … It’s a pleasant surprise that Lydia Davis is so engaging on the subject of Lydia Davis. Few writers have anything useful to add to contextualize their art. Then again, few writers make the kind of work that really needs some explication…It’s refreshing to hear her explain herself…Or, most of the time anyway … Anyone weighing going into debt for an MFA should know that they can instead buy this book … She’s so deeply cerebral it’s perhaps counterintuitive that Davis is a companionable presence. She’s erudite, with catholic interests, and earnest but not humorless. This is the kind of book you could read alone in a restaurant and feel you’re lost in a stimulating conversation … As a critic, she is perceptive, yes, but also truly engaged … we can’t all be Lydia Davis, but thank god we have her.”

3. Carrie Fisher: A Life on the Edge by Sheila Weller

“Pulling from extensive research and interviews done with everyone from the neighborhood children Fisher grew up with to her extensive group of cherished friends, Weller knits these pieces together into an engrossing and meaningful look at the inner life of a woman who described herself as ‘a writer who acts.’ The result is a project that is breathtaking in its size and scope—Fisher lived a lot, and that is felt in page after page … But like Fisher’s life itself, A Life on the Edge runs deep. It is less a long book than a very full one. It’s moving, truthful and a fitting tribute to its subject and to her unflappable courage and transparency. Reading Weller’s portrait of Fisher, you will miss her, deeply.”

“In this gripping ‘bio-memoir,’ Bair candidly, dramatically, and sometimes bemusedly recounts the shocking adversity, both devious and outright vicious, that she encountered throughout the seven long years she worked diligently on her groundbreaking book … Bubbling with piquant profiles, astounding anecdotes, and illuminating insights into the ethics of and obstacles to biography, Bair’s look-back makes all the more remarkable her subsequent and exceptional biographies of Anaïs Nin, Carl Jung, Saul Steinberg, and Al Capone. A zippy biographer’s tale.”

5. Some of Us Are Very Hungry Now by Andre Perry

“… a raw chunk of life sliced into essays packed with truths, devastating realizations, music, failed coping mechanisms, a constant search for the self, and a lot of booze … More than a collection of essays, this book reads like a slightly fragmented memoir focused on the search for identity, the desire to write, and Perry’s constant sense of unease as a black man in Iowa City. While music, friends, and his love life all play major roles in the collection, alcohol, racism, the inability to create consistently—and a sense of agitated stagnation—are the elements of cohesion that make this feel like a complete, deep, satisfying read … Perry’s prose is energetic and strange. It effortlessly goes from poetic and self-assured to gloomy and plagued by insecurities to hedonistic and lighthearted … the writing is a mixture of beautiful and gritty, educated and desperate, brilliant and dark.”