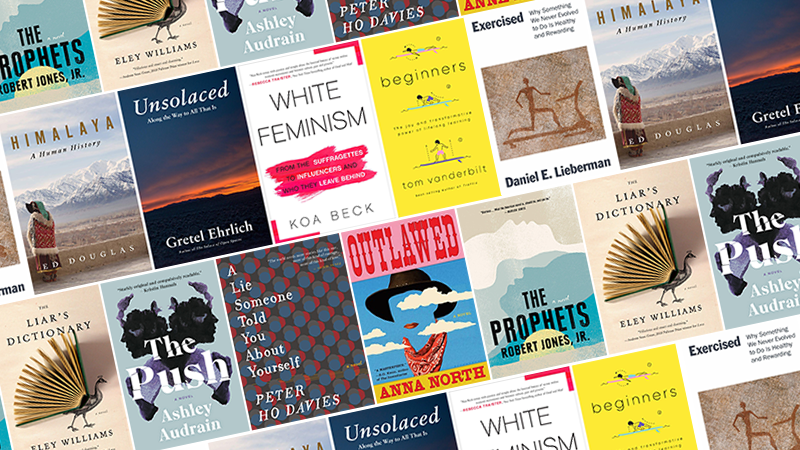 Robert Jones Jr.’s The Prophets, Eley Williams’ The Liar’s Dictionary, Peter Ho Davies’ A Lie Someone Told You About Yourself, and Daniel Lieberman’s Exercised all feature among the best reviewed books of the week.

“… a grand achievement that pits love against cruelty and spares no detail in its brutal telling of the American past … sets a tender queer romance on a harrowing plantation stage, tracking the action in lyrical, sensual detail … Jones’ exacting depiction of slavery makes for, at times, excruciating reading—his focus on abuse is unyielding. Yet his prose feels powered by a softer emotional intensity … while The Prophets’ dreamy realism recalls the work of Toni Morrison and Esi Edugyan, its penetrating focus on social dynamics stands out more singularly. Known as the founder of the ‘Son of Baldwin’ social justice blog, Jones does its namesake quite proud with this novel—a Black story and a gay story, certainly, but one that reaches far and wide in its interrogation of trauma, connection, and coexistence.”

“…sheer joy. Although I cantered through the book and welcomed its distraction during lockdown, there are enough hidden jokes and cunningly disguised rabbit holes to make one want to return to it … a novel of lists, alliterations, allusions, swirling meditations on language, dictionaries, gender, puns, linguistic jokes, text-emojis, grawlixs, tildes and even the author’s own neologisms—I shall use ‘splayground’ henceforth. As such it will endear itself to cruciverbalists and lingueccentrics, pedants and those who hate pedantry … But—and it judiciously uses Dr Johnson’s definition of the novel, ‘a small tale, generally of love’—it has heart as well as hijinks and hi-hats. It deals with love as something which cannot be put into words, and dare not speak its name (done neither stridently nor sentimentally). It is, in short, a delight.”

Read an excerpt from The Push here

“… taut, chilling … Blythe’s postpartum experience is familiar, and Audrain renders it flawlessly … Audrain has a gift for capturing the seemingly small moments that speak volumes about relationships … Audrain conjures the disintegration of marriage, along with the legacy of intergenerational trauma and the pain of parental grief, so movingly that the extent to which Blythe goes off the rails doesn’t seem that far-fetched … Occasionally the second person gets repetitive, and I found myself longing to hear Fox’s voice—or anyone else’s, really. But the chapters examining Blythe’s family’s past provide texture, and the narrative feels more balanced once Fox’s partner is tricked into dishing on their life, even asking Blythe for parenting advice. Finally, someone thinks she’s a good mother.”

4. A Lie Someone Told You About Yourself by Peter Ho Davies
(Houghton Mifflin Harcourt)

“…piercing and expansive … A Lie isn’t only a novel about the shame, sorrow (and, yes, relief) that sometimes accompanies an abortion decision. Davies also tackles what comes next in painstaking detail … While this synopsis might sound like yet another run-of-the-mill ode-to-parenting story, albeit with an abortion lead-in, it’s quite the opposite. Because the book is told in third person from the bumbling father’s unsentimental and often painfully honest point of view … Also of note is Davies’ stark and refreshingly realistic portrait of the couple’s marriage … a deftly written, bittersweet and thought-provoking book.”

Read an excerpt from Outlawed here

“Talking to friends this past week, I’ve described Anna North’s new novel, Outlawed, as The Handmaid’s Tale meets Butch Cassidy and the Sundance Kid … Outlawed, in this quick summary, can sound gimmicky, but there’s much more going on in this smart adventure tale than just a sly upending of the traditional Western, rooted in macho individualism and violence. For all the ways North ingeniously stretches the limits of the genre, she’s also clearly a fan … Most of all, though, it’s the affecting character of Ada who’s the steady draw here … For Ada and the other ‘outlaws’ of this spirited novel, the frontiers of gender and sexuality beckon to be explored.”

1. Exercised: Why Something We Never Evolved to Do Is Healthy and Rewarding by Daniel Lieberman
(Pantheon)

Read an excerpt from Exercised here

“… riveting … An irresistible aspect of Exercised is Lieberman’s firm stance that no shame or stigma be attached to those who find it challenging to sustain an exercise program … Another exceptionally informative part of the book discusses the damage-and-repair cycle brought on by exercise. Lieberman explains more clearly than I’ve ever read what exercise does to the body and how the body then begins to repair itself afterwards … written in a warm, sometimes dryly amusing tone that’s highly appealing. Colorful personal stories enliven the book … Lieberman makes a superb guide for anyone wishing to understand why it can be hard to commit to exercising and why we should do it anyway.”

Read an excerpt from Himalaya here

“… fascinating … The sections covering mountaineering history are particularly strong. This is to be welcomed, because there was a period when British mountaineers took almost too pragmatic an approach to the Himalaya. They were regarded as lumps of rock to be conquered and any spiritual values were considered a distraction … Douglas weaves a far richer tapestry, showing how this is a sacred landscape influenced by very worldly concerns … In telling his story, Douglas certainly puts down a lot of fixed ropes to make the ascent. Some readers may find the accretion of detail overwhelming—too many footnotes make it into the text—and wish for a bit more free climbing. But it is still impressive. This is a magisterial account of the complex human history of the greatest mountains on Earth.”

3. Unsolaced: Along the Way to All That Is by Gretel Ehrlich
(Pantheon)

“[A] memoir in which a lack of chronology—more a collection of beautifully rendered memory fragments—disrupts any notion that ‘background’ experiences provide a progression in Ehrlich’s life … Global climate change means that landscapes we thought were forever are impermanent, while the pandemic makes clear that control over our human environment is equally illusory. And yet, out of this instability, the kinetoscope-like structure of Ehrlich’s memoir offers views of a rich and full life … Ehrlich brings a keen awareness of place, the uniqueness of each setting, while also understanding their interconnectedness as part of the larger planet … while some of Ehrlich’s observations of humans feel awkward, her language when describing the natural world is poetic … Ehrlich reminds us of what is at stake as we confront the climate crisis.”

4. White Feminism: From the Suffragettes to Influencers and Who They Leave Behind by Koa Beck
(Atria)

“A former editor at Jezebel, Vogue, and Marie-claire.com, Beck illuminates how prejudice and elitism suffuse mainstream feminist thinking … As a biracial and queer woman, Beck knows what it means to be excluded from this narrative. But because she’s ‘light skinned and very conventionally feminine’—and often mistaken for white and straight—she has also experienced its privileges. Her status as both an outsider and insider to white feminism’s default identity gives her a prime vantage point from which to critique its mechanisms … What’s ‘feminist about oppressing other women within the shadow of slavery so you can have a corner office and be profiled in The Cut?’ Beck rightly asks. Beck artfully traces how these contradictions have been baked into the feminist movement from its beginnings … Beck is a perceptive cultural critic, but even more importantly, she’s a visionary. Her book ends with a rousing blueprint for a more inclusive ‘new era of feminism’ … powerful and inspiring.”

5. Beginners: The Joy and Transformative Power of Lifelong Learning by Tom Vanderbilt
(Knopf)

“Vanderbilt doesn’t try to gloss the hard facts about learning and aging—babies learn best of all—but he offers some cautious reasons for hope, and shows that learning at any age is good for you … He also passes on plenty of good technical advice … Even if you’re not a singer, this is all fascinating … There is a certain bittiness to this book, with each section on a particular skill feeling self-contained. This is partly because, as Vanderbilt concedes, skill learning is specific. Nothing about trying to stand up on a wobbly surfboard will help you learn to draw. Even skills like surfing and cycling, which both require good balance and body strength, have little crossover … Gradually, though, an overall argument emerges, even if Vanderbilt is overfond of supporting it with the standard formulae ‘according to research’ and ‘studies have found’ … is itself a pleasure to read.”