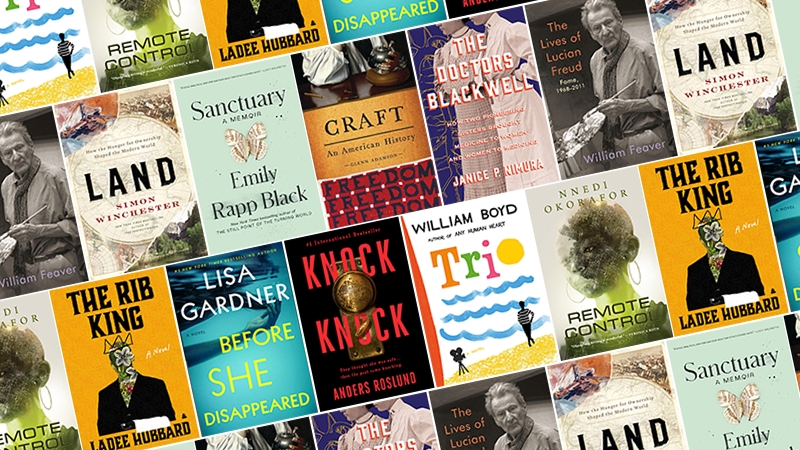 “It would be hard to think of a living novelist whose books encompass more history, more settings, more professions, more varieties of individual fate, than William Boyd … For readers who go to fiction for the pleasures of panoramic sweep, elaborate plotting and the company of a humane, genial intelligence, he has become one of the preferred masters. His new book, Trio, delivers much of the same set of literary goods, with perhaps a lighter touch than usual … More than just a clever authorial performance, the structure underpins a sustained preoccupation with the tension between fate and chance, art and accident, script and improvisation … Its settings (especially the pubs) are sharply observed. Its humor and melancholy are comfortingly English, premised (like the old British sitcoms it also resembles) on the supposition of a helpless collective commitment to folly. It’s a satisfying production, entertainingly retro, like a ride in Talbot’s beloved vintage Alvis coupe … It seems churlish to wish—though I did—that the mission had been a touch more dangerous.”

Listen to an excerpt from Remote Control here

“… gorgeous … Episodic and organic, the story winds along with a limber rhythm that allows every rich detail of Sankofa’s surreal world to surface. It’s a cumulative narrative, a slow burn that builds in emotional urgency even as the scope of Okorafor’s worldbuilding bursts into something breathtakingly vast … By story’s end, Okorafor pulls a neat trick: She uses the way in which legends morph throughout time to add another level of ambiguity to Sankofa’s origin and fate. It’s a delicious ambiguity, though, one that blurs the lines between worship and fear, between machine and flesh, between corporation and culture, and between death and reclamation.”

“Hubbard weaves large issues into The Rib King: racism in all its manifestations, from the tedious everyday indignities its characters endure to staggering economic inequality and unpunished violence. The Great Migration, the early years of the civil rights movement and the rise of the Black middle class all provide background for the story. Hubbard’s measured, elegant style is a grounding contrast to it all, and she crafts a complex, suspenseful plot with skill. But, most of all, The Rib King is about its characters, complex, engaging, determined to rise.”

4. Before She Disappeared by Lisa Gardner
(Dutton)

Read an excerpt from Before She Disappeared here

“… pulls no punches as [Gardner] spins an excellent tale … a very satisfying thriller … a novel firmly rooted in modern technology and investigative techniques as well as the minutiae of the life of the urban poor. This realism of Ms. Gardner’s served to assuage, too, any reservations I had of Frankie playing a weird, white-lady-savior role even before our heroine bluntly faces the reality of what she’s doing … Smart, suspenseful, and socially conscious, this novel knows how to concoct a thriller out of current affairs without cheapening the subject or deriding any of the people involved. Frankie is a troubled, complicated woman determined to do the right thing while also recognizing that she doesn’t have all the answers and is in no place to dictate the affairs of others. She’s a wonderful heroine for our turbulent times. In all honesty, I’m sad that this is a standalone, as I’d love to read more of Frankie and her cases. I’ll just have to check out Ms. Gardner’s many other novels to find more heroines I’ll undoubtedly root for as much as I cheered on Frankie.”

“Knock Knock would be noteworthy solely for the fact that it is Anders Roslund’s debut novel … Knock Knock continues the Roslund/Hellström series featuring Stockholm Criminal Inspector Ewert Grens and former police informant turned security expert Piet Hoffman. I am happy to say that it meets and exceeds the expectations created by its predecessors … shot through with images and scenes that are impossible to forget and are intertwined with a number of suspenseful vignettes. Anders Roslund is a household name throughout most of the world as a master of crime fiction, and this book is a sterling example of why.”

“Ms. Nimura places the stubborn, brilliant Blackwell sisters in an America that seems both utterly foreign and jarringly familiar, and she does so at a moment when we’re forced to confront the limitations of the medical orthodoxies and public-health initiatives of our time … Ms. Nimura’s chronicle of the loneliness of the Blackwells’ path, made harder by their habitual unwillingness to compromise or accommodate, is enormously affecting. As in this author’s previous book, she is wonderfully attentive to nuances and contradictions, noting Elizabeth’s internalized misogyny as she deplored the silliness of women and aligned herself with men … Small, memorable details pop up throughout the book…Yet it’s the largeness of this story that most impresses. It ranges through European capitals and many American cities during a time when travel was arduous and slow. Along the way, encounters with a surprising number of notable figures emerge … Ms. Nimura’s portrait of the Blackwells’ America blazes with hallucinatory energy. It’s a rough-hewn, gaudy, carnival-barking America, with only the thinnest veneer of gentility overlaying cruelty and a simmering violence … fits as a vivid echo of our own America, suspended as we are in another feverish moment of both crisis and opportunity.”

2. The Lives of Lucian Freud: Fame by William Feaver
(Knopf)

“William Feaver, a friend and collaborator of Freud’s for 30 years, gives us a Lucian who always resisted categorisation … Having enjoyed almost unrivalled daily access to Freud, Feaver records with little editorial filtering the egotism, the sexual prowling and the remorseless urge to produce of these later years, allowing Freud to reveal himself in his own words on every page. It’s a mesmerising picture of a paintaholic who was incorrigibly on the make … Feaver’s vastly detailed biography is the ideal companion to Freud’s work. It resembles nothing so much as a large Freud canvas: hypnotic, occasionally reiterative, quirkily dark in places, proceeding by a process of obsessive accretion.”

3. Land: How the Hunger for Ownership Shaped the Modern World by Simon Winchester
(Harper)

Read an excerpt from Land here

“… engrossing … With his unique blend of wide-eyed curiosity, meticulous research, and erudite analysis, Winchester weaves a tapestry that encompasses nearly every element involved in the concept of ‘land’ … Land abounds with dozens of eye-opening factoids to please any fan of popular history … But this is no mere bathroom book packed with intriguing facts. His storytelling talents on full display, Winchester convincingly demonstrates that, as the subtitle notes, land and ownership have indeed ‘shaped the modern world.’ Those kinds of sweeping pronouncements are an unfortunately bombastic, exaggerated element of countless nonfiction subtitles but, in this case, it holds true … Though relevant, Winchester’s examination of the disruptive enclosure and clearance movements in rural England and Scotland is probably the book’s least interesting section. However, it’s a rare dull moment in an otherwise entertaining book, exemplified in three standout chapters … Winchester’s colorfully rendered capsule biographies help to convey the gravity of certain historical milestones … Winchester is, once again, a consummate guide.”

Read an excerpt from Sanctuary here

“This expansive memoir travels back and forth through time, dwelling in deeply personal detail on Rapp Black’s efforts to forge a new life while still honoring and learning from the old … In Sanctuary, [Black] writes about [her son’s] death with elegant poise and a tenderness that is equal parts raw and generous … she writes with fierce honesty and zero sentimentality, in a way that distinguishes her from many others who write about grief and trauma … Rapp Black’s exquisite prose is as compelling as her intellectual rigor … In the end, Sanctuary is not a memoir of grief or of survival, but rather simply a story about living. Rapp Black is astute and sensitive, and she invites readers to bear witness to the intimate, intense, and profound experiences of losing and gaining so much.”

“Adamson displays his vast knowledge of crafts, artisans, and political and business figures who have helped or hindered craft’s advancement … Adamson leads us on a chronological journey through American history, pointing out along the way—sometimes in lush detail—the various craft movements and ideas that were prominent at certain times. The text swarms with interesting anecdotes and names—some well-known and others who will be less familiar to most readers … Throughout the narrative, the author displays a sensible sensitivity to various cultural, racial, and gender issues that remain with us … The author offers welcome details about such topics as repressive schools for American Indians (e.g., Carlisle Indian School) and Rosie the Riveter … Thoroughly researched and written with passion—and a bit of bite.”