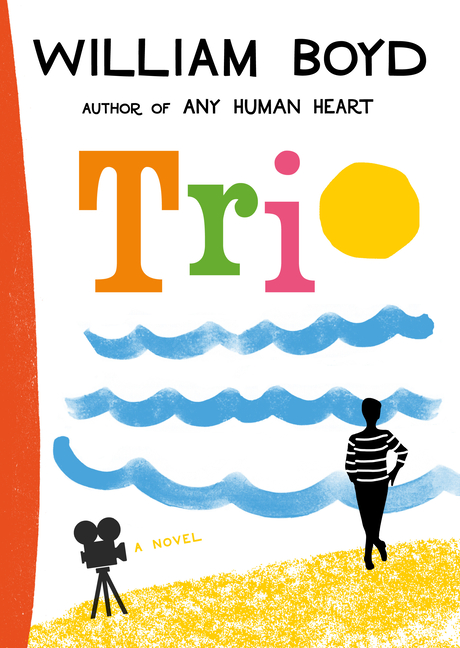 A producer. A novelist. An actress. It's summer 1968—a time of war and assassinations, protests and riots. While the world is reeling, our trio is involved in making a disaster-plagued, Swingin' Sixties British movie in sunny Brighton. All are leading secret lives.

What The Reviewers Say
Rave James Lasdun,
The New York Times Book Review
It would be hard to think of a living novelist whose books encompass more history, more settings, more professions, more varieties of individual fate, than William Boyd ... For readers who go to fiction for the pleasures of panoramic sweep, elaborate plotting and the company of a humane, genial intelligence, he has become one of the preferred masters. His new book, Trio, delivers much of the same set of literary goods, with perhaps a lighter touch than usual ... More than just a clever authorial performance, the structure underpins a sustained preoccupation with the tension between fate and chance, art and accident, script and improvisation ... Its settings (especially the pubs) are sharply observed. Its humor and melancholy are comfortingly English, premised (like the old British sitcoms it also resembles) on the supposition of a helpless collective commitment to folly. It’s a satisfying production, entertainingly retro, like a ride in Talbot’s beloved vintage Alvis coupe ... It seems churlish to wish — though I did — that the mission had been a touch more dangerous.
Read Full Review >>
Positive Ella Atkins,
The Washington Post
For all its brio, Trio hits some serious notes. It has a whiff of the ambivalent Graham Greene about it, waffling between the worldly gravity of The Quiet American and the sober farce of Our Man in Havana — as in fact the whole of Boyd’s celebrated oeuvre does, with its admixture of social, comic and recent-historical drama ranging light-footed all over the world ... They all think and act like characters in a screenplay (Anny: 'It was crazy — stop! She admonished herself. Get a grip. . . . She hated herself for thinking this but she wanted to see him again — just once more.') But they are in a screenplay, in a sense, and the movie Boyd has made of them may not be Bergman or even Capra, but it is, as I began by saying, diverting.
Read Full Review >>
Rave Joseph Peschel,
The Brooklyn Rail
... an intriguing story ... Boyd reveals fascinating central and minor characters with hidden and often double lives ... You might think that these eccentric movie types would be a tad stereotypical, but Boyd manages to make believable, and sometimes humorous and pitiable people out of his major characters and even the supporting cast. Even minor characters like the gay private investigator, the FBI agent, and the Special Branch inspector seem interesting and true to life ... a fine, well-tuned novel with plenty of perfectly-paced drama, wit, and intriguing plot twists that accompany its more serious themes about privacy, secrecy, and Camus’s one fundamental philosophical question from which all questions follow. Since Boyd’s story is populated mostly with film folks, and knowing that Boyd has had his hand in screenplays and plays, I wouldn’t be surprised if he doesn’t write the screenplay for this story, even if film doesn’t quite reveal what’s going on in those masked and private human heads as perfectly as the novel.
Read Full Review >>
See All Reviews >>
SIMILAR BOOKS
Fiction

Aesthetica
Allie Rowbottom
Positive
What did you think of Trio?
© LitHub | Privacy