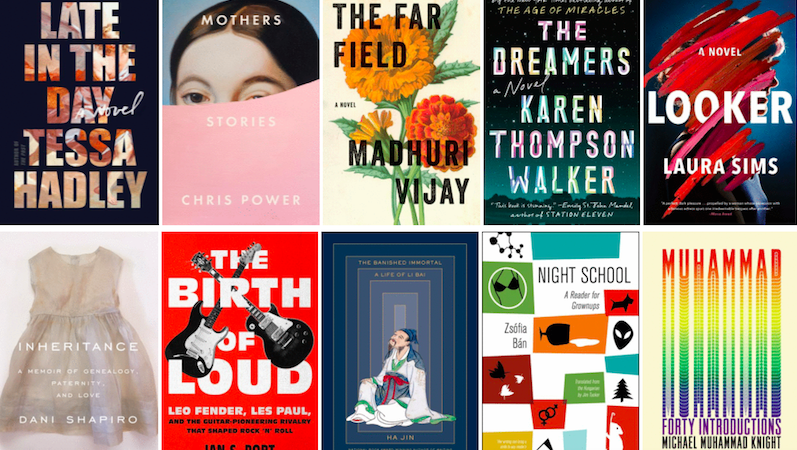 1. Late in the Day by Tessa Hadley

“Here as in her previous six novels, it’s in part Hadley’s unflinching dissection of moments and states of consciousness that makes the [Virginia] Woolf comparisons irresistible, but it’s also her commitment to following digressions both mental and philosophical (a debate, for instance, on the ethics of tourism) rather than pushing away at plot … It’s to her great credit that Hadley manages to be old-fashioned and modernist and brilliantly postmodern all at once … We’ve seen this before, and we’ve never seen this before, and it’s spectacular.”

“Chris power’s debut might almost convince you that the 10,000-hour rule applies to mastery of that exacting art form, the short story. Since 2007, he’s been writing a regular column for The Guardian about expert practitioners of the genre, from Chekhov to George Saunders. Now the London-based writer has dared to publish a collection himself. Forgive the cliché, but you won’t be able to put it down: As soon as you finish the quietly suspenseful book, you’ll want to reread its opening story … ‘The author laureate of not knowing,’ as Power once described Chekhov in a Guardian column, has taught him well.”

3. The Far Field by Madhuri Vijay

“What seems at first like a quiet, ruminative story of one woman’s grief slowly begins to spark with the energy of religious conflicts and political battles. Vijay draws us into the bloody history of this contested region and the cruel conundrum of ordinary lives trapped between outside agitators and foreign conquerors … The Far Field is most poignant when it exposes the unintentional havoc of good intentions … The Far Field offers something essential: a chance to glimpse the lives of distant people captured in prose gorgeous enough to make them indelible—and honest enough to make them real.”

4. The Dreamers by Karen Thompson Walker

“The Dreamers eschews typical disaster plotting; there’s no Purge-level anarchy or menace. Instead this is an exquisite work of intimacy. Walker’s sentences are smooth, emotionally arresting—of a true, ethereal beauty … we’re invited into the dreamers’ worlds, and there, in the slumbery depths, this book achieves its dazzling, aching humanity.”

“Looker is a sugarcoated poison pill of psychological terror, whose wit and fluency cover its lacerating diagnosis of the deranging effects of envy, perhaps the most widespread social sickness of our age. The novel disturbs because we are all, to some degree, susceptible to the bacillus of the narrator’s insanity. And her symptoms may be more recognizable than we care to admit.”

1. Inheritance: A Memoir of Genealogy, Paternity, and Love by Dani Shapiro

“In her fascinating new memoir, Shapiro…begins a remarkable, dogged, emotional journey as [she] digs into the past to find the truth. Inheritance reads like a mystery, unfolding minute by minute and day by day. The reader experiences the grief, surprises and setbacks right along with the author … She juggles all of these threads and—it must be said—all of this overwhelming emotion quite deftly, while spinning the story out smoothly … Shapiro’s book is a wise and thorough examination of how this news affected her. She is a good guide for the bombshells that are yet to explode for so many families.”

“Lively and vivid … traces the dual arc of the men’s rise with consummate skill and authority … Port does an outstanding job of tracking the ways each new musician, from Buddy Holly to Jimi Hendrix, vaulted over the next, engaging the new instruments with ever-surprising results. Port tells the story elegantly and economically … Describing sound is extraordinarily difficult; Port can do it without channeling one of those weird, adjective-heavy descriptions of wine or perfume…he just gets it … The story of these instruments is the story of America in the postwar era: loud, cocky, brash, aggressively new.”

3. The Banished Immortal: A Life of Li Bai by Ha Jin

“Ha Jin’s masterful style and deep affection for his subject make the book a pleasure to read—especially for those unfamiliar with Li Bai or Chinese poetry in general … liberally quotes Bai’s work, sometimes reproducing complete poems in translation to show the depth of his imagery and style. A number of readers will pick up this book knowing its author but not Li Bai, and Ha Jin makes sure they see Bai’s prodigious talent. Newcomers will be swept up in Bai’s personal history while fans of his work will enjoy Ha Jin’s own take on the man and his influence.”

4. Night School: A Reader for Grown-Ups by Zsófia Bán, Trans. by Jim Tucker

“Doesn’t read like a translation at all. Nor does it read like anything you’ve ever perused … takes readers on a wild romp through a kaleidoscope of postmodern fairy tales … Bán’s humor transcends language barriers, and Tucker’s translation never leaves us wondering what we’ve missed out on by not speaking Hungarian. A must-read for anyone who needs a break from the grim currents of contemporary literature, yet still craves the heady thrill of a really smart book.”

“More than a survey of the prophet’s life and times, this book is an introduction to the stunning diversity of Islam and the ways in which Muslims think, dream, and make Muhammad into their very own prophet … Anyone who picks up this sparkling book will be introduced to the many Muhammads who exist in the world and the ways in which they are in conversation with each other in the lives of Muslims across the globe.”