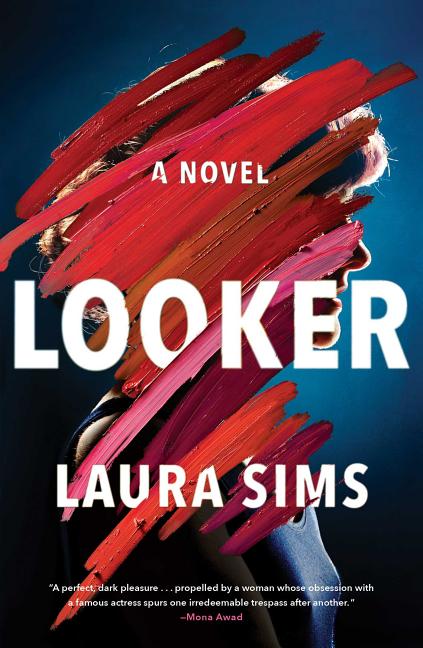 An unraveling woman, unhappily childless and recently separated, becomes fixated on her neighbor—the beautiful, famous actress. The unnamed narrator can't help noticing with wry irony that, though she and the actress live just a few doors apart, they are separated by a chasm of professional success and personal fulfillment. When an interaction with the actress at the annual block party takes a disastrous turn, what began as an innocent preoccupation spirals quickly—and lethally—into madness.

What The Reviewers Say
Positive David Canfield,
Entertainment Weekly
Laura Sims’ debut novel is an immersive investigation of obsession ... Sims’ approach is not judgmental ... The author so prioritizes her clever, contemplative heroine’s voice that, even as killer one-liners and suspenseful sequences abound, what settles in most clearly is an overwhelming melancholy ... Sims is smart enough not to let readers off the hook by reveling in mockery ... Looker is a wicked slow-burn without a clear arc to follow. The prose could use a serious tightening ... But this is still a strong, tense effort, short and addicting enough to be scarfed down in no more than a day.
Read Full Review >>
Positive Sam Sacks,
The Wall Street Journal
Looker is a sugarcoated poison pill of psychological terror, whose wit and fluency cover its lacerating diagnosis of the deranging effects of envy, perhaps the most widespread social sickness of our age. The novel disturbs because we are all, to some degree, susceptible to the bacillus of the narrator’s insanity. And her symptoms may be more recognizable than we care to admit.
Read Full Review >>
Positive Katy Waldman,
The New Yorker
Some voyeurs are discomfiting because they hunger for things that we hate to admit we want: sex, material wealth, admiration. In Looker, the unnamed narrator’s motivations feel more devastating ... Sims delays resolving [the book's] tensions. She gives us the seedy, genre-peculiar pleasures of an unreliable narrator, especially as the looker’s trespasses worsen ... In the end, the Hitchcockian thrills of Looker prove only skin-deep; the book unmasks itself as a twisted portrait of pain ... Looker, at a hundred and eighty pages, lasts about as long as a movie, and not even half as long as a full night’s sleep. It’s an ephemeral fiction with a hard landing—like a window, seen in passing, that glows and goes dark.
Read Full Review >>
See All Reviews >>
SIMILAR BOOKS
Fiction

Before She Disappeared
Lisa Gardner
Rave
What did you think of Looker?
© LitHub | Privacy