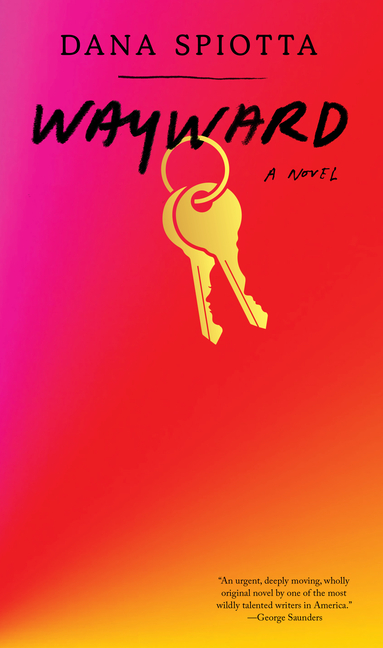 The author of Innocents and Others returns with a novel about midlife: On the heels of the election of 2016, Sam Raymond's life begins to come apart: her mother is ill, her teenage daughter is increasingly remote and she leaves her marriage. Moving into a fixer-upper and incensed about the state of the nation, Sam gets involved in local history and women's activism, all while grappling with her troubled relationships.

What The Reviewers Say
Rave Parul Sehgal,
The New York Times
... furious and addictive ... I diagramed Wayward on a paper napkin to show a friend, trying to explain the novel’s hold on me. The lure isn’t just voice or plot ... Sam turns out to be an ideal guide. She’s rash, funny, searching, entirely unpredictable, appalled at her own entitlement and ineffectuality—drawn with a kind of skeptical fondness ... The local pleasures of Spiotta’s writing are sharp, and many: Sam recalling the narcotic pleasure of holding her daughter as a baby, her painful longing and loneliness for it now. Or smaller moments ... So much contemporary fiction swims about in its own theories; what a pleasure to encounter not just ideas about the thing, but the thing itself—descriptions that irradiate the pleasure centers of the brain, a protagonist so densely, exuberantly imagined, she feels like a visitation.
Read Full Review >>
Rave TEDDY BURNETTE,
The Chicago Review of Books
Spiotta’s novel does an impossible task. The depiction of middle age and motherhood, of divorce and Facebook groups and Medium posts to sign to cancel friends, of a shooting of an unarmed boy by the police as Sam walks around town, the realization that the people walking around you at the State Fair aren’t 'good ole America' and they also aren’t strictly gun-toting, racist rednecks either—all the clichés are there and yet Spiotta effortlessly shows this as the very tangible, very American reality that it is ... In the same way that Ben Lerner writes about art, and Rachel Cusk writes about her own views on motherhood and family, Spiotta avoids the clichés and corny nature of these topics, and injects a palatable sense of realness to these normal affairs of life, of growing old in the world and in relationships and the changing nature of parenting. She accomplishes this in a supremely polished and measured prose that strays away from the more DeLillo-heavy style of her previous work. Wayward is a novel that captures middle age in all its charms and ugliness, in a way that seemingly only her and a few authors could manage.
Read Full Review >>
Rave Joanna Rakoff,
The New York Times Book Review
... exhilarating ... while Spiotta’s previous novels run on Didion-like cold fusion, Wayward reads like a burning fever dream, powered by hot fury rather than icy remove. There is a mythic quality to her narration, as well as a dark strain of humor, as if she — like Sam — can’t quite believe the world in which we’ve found ourselves ... a virtuosic, singular and very funny portrait of a woman seeking sanity and purpose in a world gone mad.
Read Full Review >>
See All Reviews >>
SIMILAR BOOKS
Fiction

The Ancestry of Objects
Tatiana Ryckman
Positive
What did you think of Wayward?
© LitHub | Privacy