The Ruin of Kings 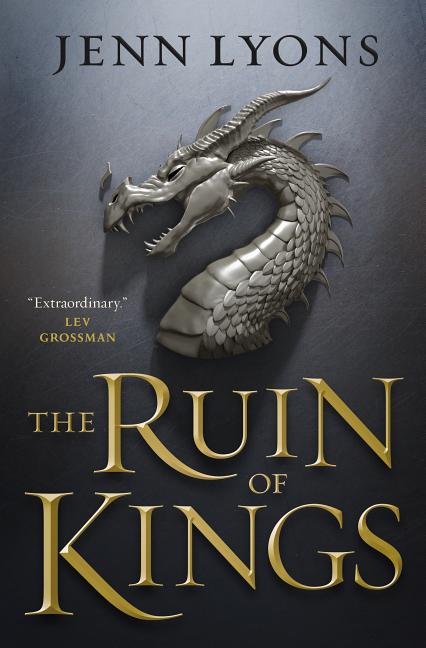 In this first in a planned five-book epic fantasy, Kihrin grew up in the slums of Quur, a thief and a minstrel's son raised on tales of long-lost princes and magnificent quests. When he is claimed against his will as the missing son of a treasonous prince, Kihrin finds himself at the mercy of his new family's ruthless power plays and political ambitions.

What The Reviewers Say
Rave Kayti Burt,
Den of Geek
Narratively, The Ruin of Kings has everything you could want from a fantasy epic ... author Jenn Lyons weaves the tale beautifully, parsing out narrative information at a masterful pace through the story's cleverly-structured frame tale .... The story is tightly-plotted with a rich setting that expands off of the pages and beyond the narrative, but this book is rarely intimidating ... Near the end of the 560-page story, the twists and turns involving the many, often similarly-named characters can get a bit confusing and expository ... For the most part, Lyons does a fantastic job of leading the reader through a dense plot, making The Ruin of Kings a supremely-accessible epic fantasy experience that doesn't sacrifice moral ambiguity, structural creativity, or textured worldbuilding in the process.
Read Full Review >>
Mixed Amal El-Mohtar,
The New York Times Book Review
I’m an absolute sucker for innovative structures, and really appreciated [the] setup—in addition to maintaining that 'but how did they get here' tension, the story-swapping makes for short, snappy chapters that put me in mind of the adage about the best way to eat an elephant. The narrative infelicities that don’t stand up to scrutiny...are shored up by the scholar’s presence, and [the narrator's] epigraph stating that he’s condensed and edited some things to make it a more enjoyable read for the mysterious royal personage to whom he has delivered it ... There are, however, too many mysteries ... The Ruin of Kings muddles stakes and scale, often substituting the latter for the former ... Parsing the genealogy of immortals quickly grows frustrating and tedious; I often felt as if I were reading the middle book of a trilogy without having read the first. That said, it’s impossible not to be impressed with the ambition of it all, the sheer, effervescent joy Lyons takes in the scope of her project.
Read Full Review >>
Positive Tom Shippey,
The Wall Street Journal
Breathless, yet, and no place for the reader to stop and catch up, as we are drawn deeper and deeper into a world with its own rules and its own personnel: god-kings, firebloods, shadowdancers and more to come, laid out tantalizingly in footnotes and glossary and addenda ... Ms. Lyons is all set to take her readers on a long journey indeed, unfolding and unfolding like brilliant origami. So far, though, not a hairy chest in sight, nor a languishing maiden. Fantasy has moved on, and is all the better for it.
Read Full Review >>
See All Reviews >>
SIMILAR BOOKS
Coming Soon

Ordinary Monsters
J M Miro
Positive
What did you think of The Ruin of Kings?
© LitHub | Privacy