The Revolution According to Raymundo Mata 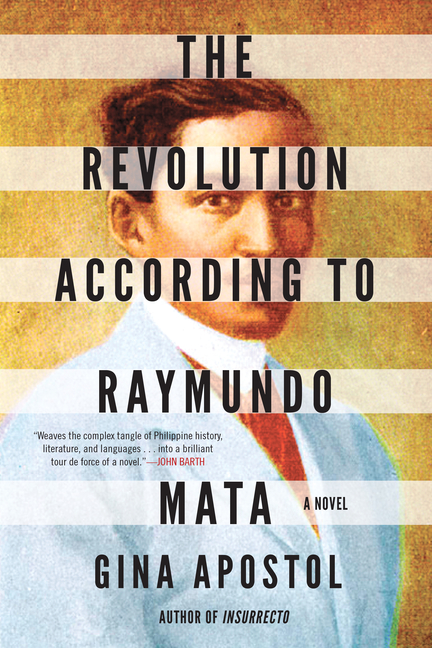 Raymundo Mata is a night-blind bookworm and a revolutionary in the Philippine war against Spain in 1896. Told in the form of a memoir, the novel traces Mata's childhood, his education in Manila, his love affairs, and his discovery of the books of the man who becomes the nation's great hero.

What The Reviewers Say
Rave Randy Boyagoda,
The New York Times Book Review
The Revolution According to Raymundo Mata wreaks playful and learned havoc on the life and work of the 19th-century writer José Rizal ... She writes historical fiction like Hilary Mantel on acid. The result is demanding, confusing, exhausting and impressive, and justified, at base, by the origin story of her native archipelagic nation ... The deranged scholarly contours of the novel manifest as a short passage per page from Mata — usually about his reading, his travels and his intrigues, political and romantic — that is otherwise dominated by multiple, rivaling footnotes. The results can be both confidently obscure and also very, very funny ... Apostol’s novel adopts absurd premises that are treated with graven seriousness by wordplay-obsessed narrators who are equal parts unreliable and cerebral ... the book occasionally seems as if it might have been more fun to write than to read. But that’s a minor footnote to this marvelous welter of Filipino storytelling.
Read Full Review >>
Rave Michael Adam Carroll,
Ploughshares
These complex, interrupting layers produce a hyper metafiction that is playful and ironic like Cervantes’s Don Quixote and satirize social critiques and political violence like Roberto Bolaño’s 2666 ... This interweaving recalls the Spanish word historia, which can mean either history or story depending on the context; Apostol writes the Philippines’ nineteenth-century historia by exploiting history in frontmatter, footnotes, and postscripts, and tethering fictionalized historical figures with fictional characters on a single plane ... As we volley between footnotes and source text, opinions and first-hand experience, fact and fiction, it becomes clear that Apostol’s novel requires us to sit up, lean in, and study. It demands our active participation. In the end, The Revolution According to Raymundo Mata is intended for a Filipino audience first— with inside jokes, play on words, and regional references—and American audiences second. And that’s a definitive reason to pick it up. Apostol holds a mirror to American exceptionalism and forces us to look.
Read Full Review >>
Rave Sarah Kerr,
Book Post
The role of [Jose] Rizal’s novels Noli Me Tangere and El Filibusterismo in begetting a mass movement looms large in Gina Apostol’s new novel, The Revolution According to Raymundo Mata ... Centuries of interference and linguistic havoc, crazy lurches of history, the cursed blessing of being a nation conceived in fiction. In her thoughtful author’s note to The Revolution According to Raymundo Mata, Apostol suggests that these experiences have paradoxically made the Philippines a world leader in an undervalued kind of knowing ... [an] intricate, almost ferally inventive literary game ... The Revolution According to Raymundo Mata gives us faithfully researched atmosphere and events from the decade leading up to the revolution’s explosion, but this backdrop is hybridized with loopily imagined scenes that court the absurd.
See All Reviews >>
SIMILAR BOOKS
Fiction

The Most Beautiful Girl in Cuba
Chanel Cleeton
Rave
Fiction

Revelations
Mary Sharratt
Positive
What did you think of The Revolution According to Raymundo Mata?
© LitHub | Privacy