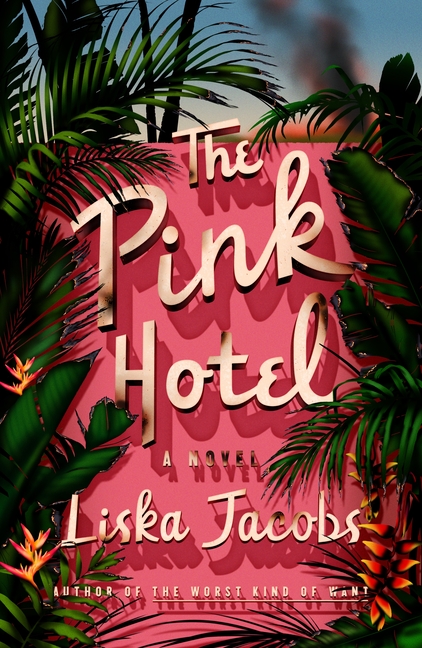 Soon after their arrival at the opulent Pink Hotel, wildfires sweep through the surrounding mountains and Los Angeles becomes a pressure cooker, with riots breaking out across the city amid rolling blackouts. The hotel closes its doors to "outsiders," and Keith and Kit find themselves confined with an anxious, disgruntled staff and a growing roster of eccentric, ultra-wealthy, dangerously idle guests who flock to the hotel for sanctuary, company, and entertainment.

What The Reviewers Say
Pan Molly Young,
The New York Times
Jacobs is the author of two previous novels, The Worst Kind of Want and Catalina. Both are swift, insightful and raw. The Pink Hotel is comparatively plodding and repetitive. This comes down to a perspectival choice: Jacobs moves fluidly among characters, briefly alighting in one person’s inner monologue before moving to the next. To do so with clarity is a technical achievement, but it presents a narrative conundrum. If the reader is aware of every character’s intentions at all times, opportunities for uncertainty or deception — for suspense and revelation — become scarce ... Being trapped in the minds of the couple and the hotel guests also means that we exist in a nonstop stream of ditziness. Jacobs is talented at conjuring outrageous images, but the examples lose their punch as they pile up. Neither Kit nor Keith experiences what could be called an idea. They merely exist as avatars of complacency and ignorance ... Everyone is a baby and everyone is an animal. The comparisons are vivid but slightly confusing. After all, the helplessness of a baby isn’t a failure of conduct, and animals aren’t hedonists ... What’s missing in the book is a fresh, revelatory target. Vulgar materialism, climate change denialism, status anxiety and the solipsism of the rich are all implicitly denounced, as is misogyny ... As the story proceeds, we wait for the couple to collide with their delusions in a grand reckoning. Eventually they do, but Jacobs hasn’t given them the depth to earn our sympathy.
Read Full Review >>
Mixed Annie Bostrom,
Booklist
... over the top in pretty much every way—there’s a literal luncheon for couture-clad dogs—an orgiastic quasi-dystopia so sensuously described you might be watching it unfold on Instagram. Buzzing among Kit, Keith, and a slew of hotel staff and mostly eccentric and clueless guests, Jacobs tells us over and again what these characters look like, if not who they are, which might be precisely her point.
Read Full Review >>
Positive Publishers Weekly
... amusing if over-the-top ... The chaotic climax is something to behold, but thinly drawn characters water down the satire’s potency, and the class commentary is a bit predictable. Readers who can look past a few wobbles will be easily carried along by the rollicking madcap sensibility.
Read Full Review >>
See All Reviews >>
SIMILAR BOOKS
Fiction

Mount Chicago
Adam Levin
Mixed
What did you think of The Pink Hotel?
© LitHub | Privacy