The Bricks That Built the Houses 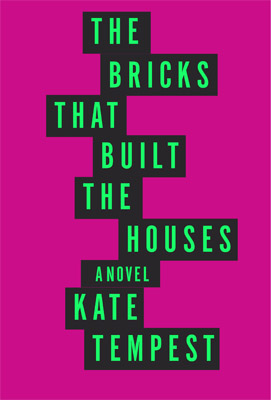 Becky, Harry, and Leon are leaving London in a fourth-hand Ford with a suitcase full of stolen money, in a mess of tangled loyalties and impulses. But can they truly leave the city that's in their bones?

What The Reviewers Say
Rave Sam Byers,
The New York Times Book Review
In Tempest’s London, no one is insignificant; everyone has a story. The devotion and care with which she recounts these tales may initially seem distracting, but the cumulative effect is deeply affecting: cinematic in scope; touching in its empathic humanity. The city, for better or for worse, makes these people who they are, and they in turn make London the city Tempest unflinchingly evokes: cold, gray, profoundly lonely, but shot through with homely chatter and rare warmth...Tempest’s voice — by turns raging and tender — never falters. By the time the novel reaches its cleareyed climax, cleverly undercutting its own promised happy ending, the reader is left with the impression of a work that hums with human life.
Read Full Review >>
Mixed Jon Michaud,
The New Yorker
Tempest has a knack for the devastating throwaway line...But her verbal gift sometimes loses its way in the open expanse of prose...'If you are in love with language, it’s difficult to look at words as pegs to hang a plot from,' Tempest has said while promoting her book. Some novelists might take umbrage at the idea that they aren’t as in love with language as poets are; in the best prose fiction, language is both functional and poetic, peg and panpipe. What The Bricks That Built the Houses fails, at times, to give us is the measure of its author’s keen lingual instinct, the charisma and dynamism of Tempest on a stage, freestyling, reciting, versifying. It’s as if she has handicapped herself in writing the book, underestimating the novel’s potential for the kind of magic she normally deals in.
Read Full Review >>
Mixed Alex Preston,
The Guardian
Novels are inward-looking, shifty things, and can’t be all dazzle. There are many passages in The Bricks That Built the Houses where Tempest’s extraordinary talents are able to shine through. Elsewhere, and particularly in the long and multi-generational origin stories that we are given for each of the characters, the prose flounders, and I found myself willing the sentences off the page and on to a stage, with Tempest’s unique delivery and the rigorous thump of a backbeat marshalling new life into the words.
Read Full Review >>
See All Reviews >>
SIMILAR BOOKS
Coming Soon

The Magnolia Palace
Fiona Davis
Rave
What did you think of The Bricks That Built the Houses?
© LitHub | Privacy