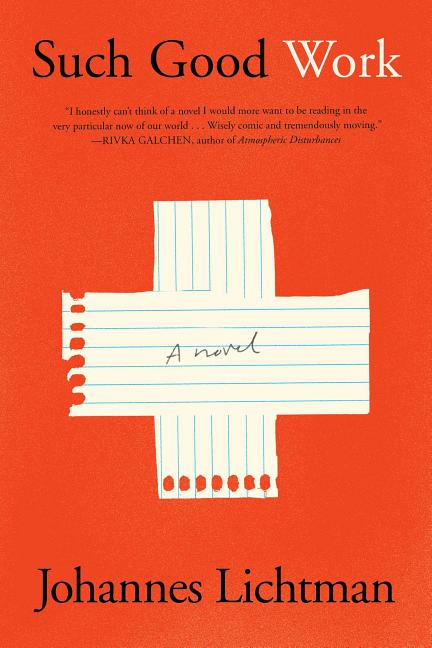 Prompted by his drug addiction and latest dismissal to relocate to 2015 Sweden, creative-writing instructor Jonas Anderson volunteers to teach Swedish to Middle Eastern refugees, including one who challenges his views about making a difference.

What The Reviewers Say
Positive Rebecca Dinerstein,
The New York Times Book Review
Lichtman, a remarkable thinker and social satirist, fills his first 50 pages with a misleadingly pedestrian cycle of basic cowardice, random aggression, flagrant self-congratulation and garden-variety self-loathing, until a Suboxone strip chops up the rhythm of his prose and the book begins in earnest ... Lichtman has a terrific ear for the tiny linguistic cues that reveal completely correct English to be nonetheless foreign, and Anja’s dialogue is delivered in sometimes heartbreakingly poignant German-English ... Such Good Work introduces a writer who is willing to openly contradict himself, to stand corrected, to honor both men and women, to ask sincere questions and let them ring unanswered.
Read Full Review >>
Positive Katy Waldman,
The New Yorker
[Such Good Work is] wary of affectation or grandstanding; it works small, as if from a sense of modesty, a reluctance to presume; it cuts sincerity with the driest of humor ... [the book contains] thoughtfulness and pathos ... The [book contains] both sadness and expectation—[it leaves] the reader grazed by tempered hopes.
Read Full Review >>
Positive Emily Dziuban,
Booklist
The novel answers its primary question, 'Is doing good even possible?', with significant emotional honesty, and Lichtman’s clear and accessible writing allows readers to explore its complex topics at many levels. Jonas is a bundle of shifting emotions, needs, and coping mechanisms, and rather than doing good, easing the discomfort of being human is at times all he can manage.
Read Full Review >>
See All Reviews >>
SIMILAR BOOKS
Fiction

Milk Fed
Melissa Broder
Rave
What did you think of Such Good Work?
© LitHub | Privacy