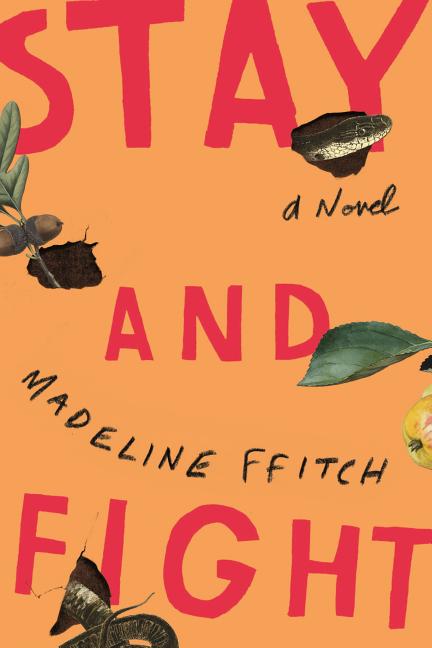 A family trying to live off the grid in Appalachian Ohio are intruded upon by the outside world after their son, Perley, begins attending school and concerned outsiders begin nosing around. A pipeline easement edging their homestead creates additional complications, raising questions about effective social action and the meaning of family.

What The Reviewers Say
Rave E.M. Tran,
Los Angeles Review of Books
Madeline ffitch's debut novel, Stay and Fight, is immersive and compelling ... There is nothing flat or caricatured about the characters in ffitch’s novel. If Stay and Fight is concerned with representing America at all, then it is a damning picture—a place that resembles nothing of the meritocratic land of bounty and opportunity that exists in the national imaginary. America is, instead, a place hostile to the poor and to the unconventional, unconcerned with things like honest industry or merit. But, the novel is more interested in representing the complex lives of people who just happen to live in Appalachia ... a scene [is] so expertly written it makes the palms sweat ... ffitch has a knack for subverting expectations through character development ... assumptions are turned deftly upside down, and we’re left to question our own prejudices about people and place ... [The characters] refuse to be boiled down to the banal matter of wealth as so many from the region are.
Read Full Review >>
Rave Scout Turkel,
ZYZZYVA
A uniquely comprehensive and necessarily tangled understanding of what it means to live under normalizing forces and rapid climate degradation is present throughout Stay and Fight, though the plot pays these matters little explicit concern, and for good reason: it doesn’t have to. Told from four distinct perspectives, each character’s understanding of one another and themselves is fundamentally mediated by their conditions; ffitch doesn’t need a manifesto to demonstrate Anthropocenic stakes ... Stay and Fight is built on...moments of unlikely and nearly coincidental intimacies ... Stay and Fight is smart and self-aware enough to refuse any confident solution toward forging intimacy and independence under our current sociopolitical circumstances. It knows that such a solution does not exist. Rather, there is staying, there is fighting, and there is fighting to stay. There is trying to protect your child from harm, and there is producing unforeseen harm as a result ... Stay and Fight touches upon the most central, tender, and violent conflicts of our time without opting for simplicity, allowing the sadness and humor of family to guide its reader toward a more generative understanding of all the ways there are to stick around for something you believe in.
Read Full Review >>
Positive Wes Enzinna,
The New York Times Book Review
.. succeeds in mapping the obscure psychological and emotional territory that defines a life caught between commitment and ambivalence, between rebellion and resignation ... Ffitch hasn’t refuted the frontier novel so much as added a new chapter to an old saga. Just like the American pioneers the author might like to disown, her characters achieve independence, but fall far short of utopia. Their experiment remains incomplete, ongoing — the road ahead wide open but fraught with danger and uncertainty.
Read Full Review >>
See All Reviews >>
SIMILAR BOOKS
Coming Soon

The Magnolia Palace
Fiona Davis
Rave
What did you think of Stay and Fight?
© LitHub | Privacy