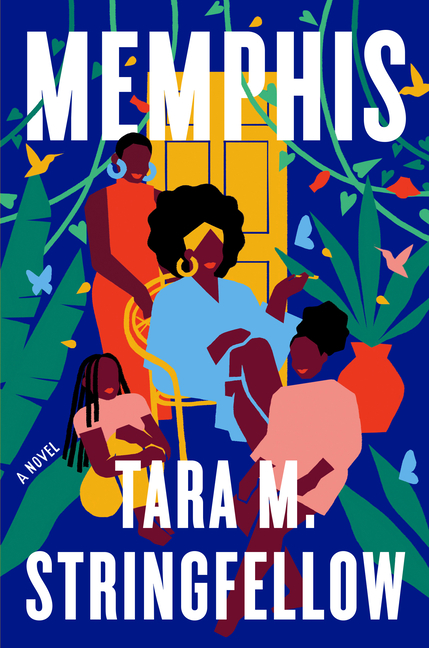 Unfolding over 70 years through a chorus of voices that move back and forth in time, Memphis paints a layered portrait of inheritance, celebrating the full complexity of what we pass down within families and nations: brutality and justice, faith and forgiveness, sacrifice and love.

What The Reviewers Say
Positive Kia Corthron,
The New York Time Book Review
Given the novel’s setting, the reader will surely anticipate systemic racism, but even so may be caught off guard by scenes in the book...Yet Memphis is far from joyless, conveying a world where blithe gratification is garnered through traditional women’s work — seamstressing, hairdressing, nursing — as well as through less conventional pursuits, as with the 1960s Black female radicals who find a welcome space for strategizing on Hazel’s porch. There is the sense that these women are familiar to Stringfellow, who, after years of living abroad (Okinawa, Ghana, Cuba, Spain, Italy), has, literally and figuratively, returned home ... Still, there is some discordance in the book’s logic. Only Joan’s chapters are written in the first person, and even as a 10-year-old girl, she expresses herself in a manner more akin to an adult. Then, years later, as a high school junior taking honors history, she oddly has not even heard of the New Deal ... Contradictions aside, Memphis is a rhapsodic hymn to Black women.
Read Full Review >>
Mixed Ron Charles,
Washington Post
Sweeping ... The path to...joy leads through decades of trauma, and during much of that time, hope is all these characters possess. Indeed, Stringfellow has a lush, romantic style that’s often the only counterweight to the grim details of her story ... The novel’s scrambled chronology initially feels like a challenge, but the chapters are clearly dated and named as they move to focus on a grandmother, her daughters and her grandchildren. Readers will come to see that Stringfellow is demonstrating the erratic movements of history, the false starts and reversals and, yes, the moments of progress that are reflected in our haphazard march toward realizing King’s vision for America ... There is, however, one irreducible problem with Miriam’s plan and, I think, with Stringfellow’s novel. In the first chapter, we learn that the last time Miriam visited, her then-3-year-old daughter, Joan, was raped by her sister’s 8-year-old son. Now that boy is a teenager, and Joan is so terrified to see him that she immediately wets herself. She will spend the next few years living with him ... Try as I might, I could never get beyond the shocking implausibility of this move ... I don’t mean to criticize the plot, per se; fiction should be free to reach for the infinitely bizarre events of real life. The issue, really, is that Memphis never commits itself to the considerable work of making this ghastly event psychologically persuasive ... It’s eventually clear that these things must come to pass so that Stringfellow can engineer a redemptive story of forgiveness. But along the way, she fails to contend sufficiently with the lasting damage and complications of incest and sexual abuse ... Fortunately, other parts of Memphis are more convincing and subtle. With her richly impressionistic style, Stringfellow captures the changes transforming Memphis in the latter half of the 20th century ... The most lovely, even inspiring element of Memphis is the story of Joan’s artistic ambitions.
Read Full Review >>
Rave Una Mannion,
Irish Times (IRE)
Ferocious and compassionate ... Stringfellow deftly weaves the voices of four women over three generations. Her women are vivid, formidable and funny, exposing the legacy of racial violence not just within the microcosm of family or the titular city, but nationally ... The city shimmers under Stringfellow’s assured prose ... This novel is, in many respects, a Künstlerroman, a portrait of an artist as a young black woman ... Memphis reaches back to literary mothers and towards potential daughters, honouring the strength, creativity and resilience of black women.
Read Full Review >>
See All Reviews >>
SIMILAR BOOKS
Coming Soon

Victory City
Salman Rushdie
Rave
What did you think of Memphis?
© LitHub | Privacy