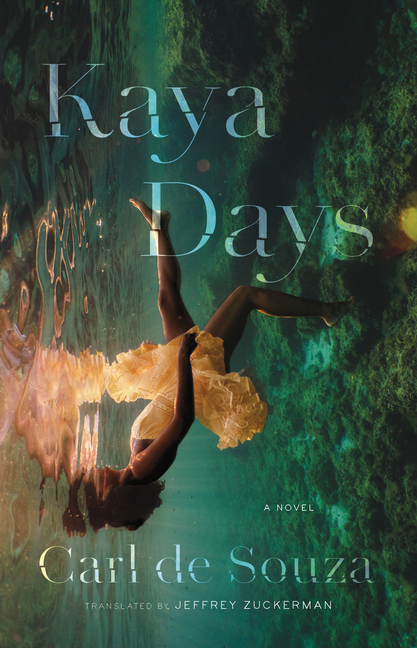 In 1999, the Mauritian musician Joseph Réginald Topize, better known as Kaya, was arrested for smoking weed while performing at a concert. Following his death in police custody just days later, the island nation surged with violence in a long-overdue demand for justice from the marginalized populations of the African island off the coast of Madagascar. In Kaya Days, the spirit of the island and its many people--Hindu, Muslim, Chinese, Franco-Mauritian, and Creole--is distilled into a young woman's daylong search through the uproar for her younger brother, who has gone missing. Amid burning cars and buildings, opportunists and revolutionaries, Santee rises into another world, a furious, brilliant one.

What The Reviewers Say
Positive Laurel Taylor,
Asymptote Journal
De Souza’s densely packed novel is a disorienting one, purposefully so. He jars his readers again and again through sudden shifts in character narration, transmogrifying objects and people, and juxtapositions of violence and jubilation ... The words tumble, churn, and burn like the refuse on the streets after the riots. ... The very indefinability of the violence of this book collapses time, collapses meaning, collapses self. Translating such a dense book is no easy feat, but Zuckerman handles it admirably, allowing the sprawl of de Souza’s prose to linger and spill where other translators might be tempted to neaten or punctuate.
Read Full Review >>
Positive Eileen Gonzalez,
Foreword Reviews
In Carl de Souza’s novel Kaya Days, a simple errand leads a teenager into a days-long odyssey. ... Kaya Days is a frantic, stream-of-consciousness novel in which a teenager comes of age in the middle of violent upheaval.
Read Full Review >>
Rave Kirkus
[d]e Souza's incessantly swift prose translates the racial and religious kaleidoscope of the Mauritian experience into a deceptively compact novel. Also noteworthy are the faithful incorporation of Francophone Creole and moments of unexpected wonderment, as when rambunctious monkeys interrupt Santee and Ronaldo's Bollywood dance number. Long overlooked in the United States, de Souza and his compatriots deserve to be celebrated stateside. An electrifying portrait of a tiny island nation on fire.
Read Full Review >>
See All Reviews >>
SIMILAR BOOKS
Coming Soon

This Is How I Disappear
Mirion Malle, Tr. Aleshia Jensen and Bronwyn Haslam
Positive
What did you think of Kaya Days?
© LitHub | Privacy