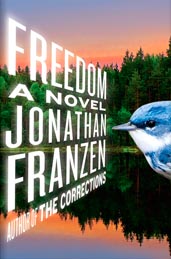 Publisher
Date
May 16, 2022
Fiction
Hottest Books of the Season
Literary

Freedom is an epic of contemporary love and marriage that charts the mistakes and joys of the Berglund family as they struggle to learn how to live in an ever more confusing world.

What The Reviewers Say
Rave Sam Tanenhaus,
The New York Times Sunday Book Review
The family romance is as old as the English-language novel itself — indeed is ontologically inseparable from it. But the family as microcosm or micro-history has become Franzen’s particular subject, as it is no one else’s today … Franzen grasps that the central paradox of modern American liberalism inheres not in its doctrines but in the unstated presumptions that govern its daily habits. Liberals, no less than conservatives — and for that matter revolutionaries and reactionaries; in other words, all of us — believe some modes of existence are superior to others. But only the liberal, committed to a vision of harmonious communal pluralism, is unsettled by this truth … Like all great novels, Freedom does not just tell an engrossing story. It illuminates, through the steady radiance of its author’s profound moral intelligence, the world we thought we knew.
Read Full Review >>
Positive Michiko Kakutani,
The New York Times
Mr. Franzen delves further into the state of mind of his creations, developing them into fully imagined human beings — not Nietzschean stereotypes easily divided into categories of ‘hard’ (shameless, ambitious brutes) or ‘soft’ (pathetic, sniveling doormats); not bitter patsies fueled by ancient grudges, but confused, searching people capable of change and perhaps even transcendence … Writing in prose that is at once visceral and lapidary, Mr. Franzen shows us how his characters strive to navigate a world of technological gadgetry and ever-shifting mores, how they struggle to balance the equation between their expectations of life and dull reality, their political ideals and mercenary personal urges.
Read Full Review >>
Positive William Deresiewicz,
Bookforum
Franzen remains superb at rendering the psychological texture of everyday experience: the gyrations of the soul, the power struggles of domestic life, the chess moves of romantic behavior. But if the terrain, and the mind that maps it, are recognizably those of the earlier novel, the contours are different … The novel is named for our nation’s highest value and is everywhere a criticism of it. The desire for freedom, in Franzen’s view, is nothing other than an adolescent urge for irresponsibility and unconnectedness. The novel is full of people whose freedom not only makes them miserable, it makes everyone around them miserable, too.
Read Full Review >>
See All Reviews >>
SIMILAR BOOKS
Fiction

Pure Colour
Sheila Heti
Positive
What did you think of Freedom?
© LitHub | Privacy