Everyone in This Room Will Someday Be Dead 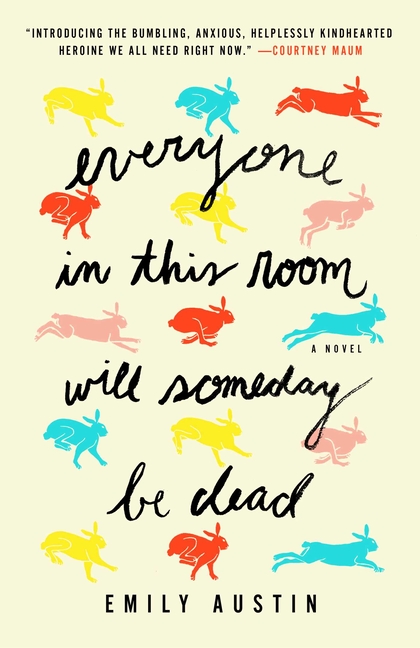 Gilda, a twenty-something, atheist, animal-loving lesbian, cannot stop ruminating about death. Desperate for relief from her panicky mind and alienated from her repressive family, she responds to a flyer for free therapy at a local Catholic church, and finds herself being greeted by Father Jeff, who assumes she’s there for a job interview. Too embarrassed to correct him, Gilda is abruptly hired to replace the recently deceased receptionist Grace.

What The Reviewers Say
Rave Jonathan Kesh,
The Rumpus
... while Everyone in This Room Will Someday Be Dead contains humor and discussions of death aplenty, it would be off the mark entirely to say the takeaway of Emily Austin’s debut novel is that death is funny. Morbid humor exists for a reason: to poke fun at our inevitable ends and lighten its emotional load. But the humor in the novel can’t quite be called 'morbid,' either. Austin has done something remarkable—she’s written an utterly irreverent story with a narrator who’s fixated on death, but death is never the punchline and someone’s passing (or the thought of their passing) is never treated with anything but the utmost tenderness. And it’s really, really funny ... Austin approaches the subject of death in a wry, humorous way that doesn’t diminish the endless anxiety it provokes in all of us. It’s not that death itself is funny, but the strings of panicked thoughts and overreactions are so relatable that it’s hard not to see our own anxieties here on the page, and there’s humor in that recognition.
Read Full Review >>
Rave Andrés Ordorica,
The Skinny (UK)
What makes Austin’s novel stand out is the authenticity and care which she employs when depicting Gilda’s struggles. As funny as the novel is, it’s equally dark and intensely harrowing. This debut is profound for its honest portrayal of mental health in a chaotic modern world, giving space for humour and tenderness while reckoning with the absurdity of the human condition.
Read Full Review >>
Rave Amy Wu,
BookOxygen
The book seamlessly flips between past and present, taking readers to Gilda’s childhood and youth, and a portrait of a quirky, highly intelligent, introspective young woman emerges, one who is clearly an outlier in her nuclear family. Austin succeeds in keeping the reader highly engaged, to discover who killed Grace and also how things will end up with Gilda. Her debut blends mystery and in-depth character examination, and just as it starts to feel a bit too intense, when we are thrust into the psyche of the neurotic central character, she defuses it with just the right amount of wit and black humor. The combination makes the book a page turner and marks Austin as a stellar storyteller.
Read Full Review >>
See All Reviews >>
SIMILAR BOOKS
Fiction

The House of Fortune
Jessie Burton
Mixed
What did you think of Everyone in This Room Will Someday Be Dead?
© LitHub | Privacy