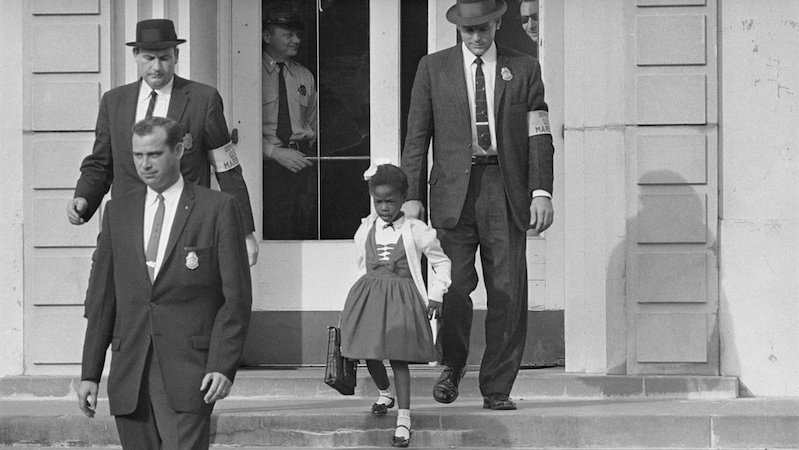 Loneliness in the Midwest, reflections on a royal, and the young women who desegregated America's schools

In her New York Times review of A Girl Stands at the Door—Rachel Devlin’s “meticulously researched” history of the young women who desegregated America’s schools—Africana Studies professor LeRhonda S. Manigault-Bryant writes: “Devlin reminds us that the task of publicly and constitutionally challenging racial discrimination in education was laid on the bodies of black girls. This is a reality with which America has yet to reckon.” Over at the Chicago Tribune, Adam Morgan marvels at the “perfect sentences, penetrating insights, [and] devastating epiphanies” to be found within The Answers author Catherine Lacey’s debut short story collection, Certain American States. In the wake of its Man Booker Prize for Fiction nomination (the first graphic novel to ever receive this honor), The New Republic‘s Jo Livingstone considers the quiet power of Nick Drasno’s Sabrina—a story of loss, grief, and “the madness we provoke in each other on the internet.” We’ve also got celebrated novelist and playwright Darryl Pinckney on an unconventional biography of an unconventional woman—Craig Brown’s Ninety-Nine Glimpses of Princess Margaret—and Nathan Deuel’s Los Angeles Times review of Jon McGregor’s “electrifying” new novel of voices, The Reservoir Tapes.

“April 13, 1947, holds little significance in the American historical memory, and yet that day was one in a long series that led to the legal desegregation of American schools. On that morning, Marguerite Daisy Carr, a 14-year-old black girl from Washington, D.C., attempted to enroll at Eliot Junior High School, the all-white middle school closest to her home. Carr’s efforts to integrate the school, which were supported by her family and local black community, preceded the landmark Supreme Court decision in Brown v. Board of Education by seven years … Recognizing the young black girls and women who were at the forefront of the civil rights movement is the central achievement of Rachel Devlin’s meticulously researched history … Devlin reminds us that the task of publicly and constitutionally challenging racial discrimination in education was laid on the bodies of black girls. This is a reality with which America has yet to reckon. Sixty-four years after Brown v. Board, the promise of that decision, and of integration more generally, remains unfulfilled. A Girl Stands at the Door tells an important story about young black women who ushered in a movement. Just as black women ‘set the world on fire’—to quote the historian Keisha N. Blain—in global freedom struggles, young black girls took it upon themselves to stand up when others would not.”

“If depression is a clouded lens that distorts reality, Lacey, who lives in Chicago, is perhaps the finest crafter of these lenses in American fiction … These narrators, one after the other, would be suffocating were it not for Lacey’s sublime prose. On every page, she slips a tiny gem into your palm, a little miracle of perspective … This is all to say that Certain American States is exactly what you would expect from Lacey: perfect sentences, penetrating insights, devastating epiphanies. Like the most intense chapters of her novels, reading this collection takes an almost physical toll. Each story inflates like a balloon until, with the very last line, Lacey cuts the string tethering it to the ground.”

“Ninety-Nine Glimpses is not a conventional biography, but rather a series of telling reflections in ninety-nine brief chapters on the royal and the gaze, on how Princess Margaret was viewed and judged over time … The openness of form that Brown, a satirist and veteran columnist for almost every British paper, allows himself, including techniques of fiction, is as unexpected as his attitude toward his subject and his witnesses … Brown has consulted the crazed and the courtiers, the broadsheets and the tabloids, and footage on YouTube. While he has no index himself, he marvels at the number of indexes in which ‘Margaret, Princess’ appears. He understands her position. Having been born a piece of history, she, as a private person, was public property … The most provocative story Ninety-Nine Glimpses tells is how mean the bohemian milieu in midcentury London could be, how heartless the British upper classes were, and how little they needed the Sixties and social change to swing.”

“In July, Nick Drnaso’s Sabrina became the first ever graphic novel to be nominated for the Man Booker Prize for Fiction. The nomination—even on the longlist—feels like an event: What kind of book using pictures would be sophisticated enough to compete with the usual Booker fare of prestige prose? A lesser work would have undermined this genre-bridging nomination, making it look like a stunt. But Sabrina—short on words, big on humanity, succinct of plot—is not a lesser work … The story that plays out across its 204 pages is simple, brief even. But the book takes its length from its pacing. Nick Drnaso moves his story at the speed of ordinary human life … The plot stakes of Sabrina are almost lurid: abduction, murder, conspiracy. But it is a gentle book. A great deal plays out inside cars, living rooms, bedrooms. The quietest and saddest panels in this quiet and sad book are the drawings that contain no people at all, like the Skype window after Calvin’s daughter has run out of frame, or a park with nobody in it. These scenes make the difference between absence and presence very clear. A person is there, or a person is not. It’s not complicated. Death is so basic and so powerful that we think up conspiracies to impose sense on it. Sabrina is a political book, in many ways, because it looks at the madness we provoke in each other on the internet. But it is also about walking through a room and then leaving it.”

“An electrifying new novel … a stylish and alarming new book … Handled with less inventive prose, a book like this might feel like a series of Stephen King-ish portraits of small people being horrible. But McGregor’s too inventive a writer not to dazzle and surprise, to create moments that confound and stir. In pages that recall some of our most excitingly dense and playful postmodern stylists, such as Padgett Powell and Robert Coover, it becomes clear, rather quickly, how dedicated to, among other pursuits, McGregor is to crafting first and final sentences … Another of McGregor’s many talents is his stunning ability to render the landscape of the northern islands … Not all of us live in a small town, but our lives are equally divisible into characters, one of which looks just like us.”