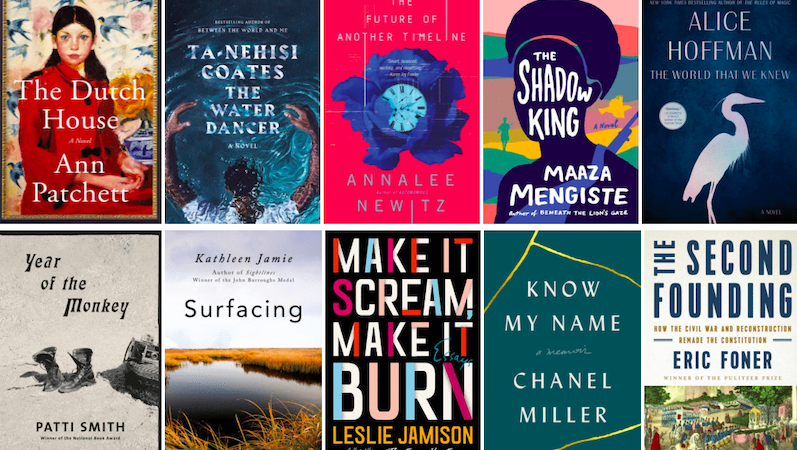 Ann Patchett’s The Dutch House, Ta-Nehisi Coates’ The Water Dancer, Patti Smith’s Year of the Monkey, and Leslie Jamison’s Make It Scream Make It Burn are among the most critically-acclaimed books of the past seven days.

1. The Dutch House by Ann Patchett

“Patchett’s prose is confident, unfussy and unadorned. I can’t pluck out one sentence worth quoting, but how effective they are when woven together—these translucent lines that envelop you like a spider’s web. It can feel old-fashioned: her style, her attachment to a very traditional kind of storytelling—a vision of the novel as a Dutch house, with a clarity and transparency of purpose and method, a refusal of narrative tricksiness. But like the family’s Dutch house, it’s an enduring structure, which gives an added dimension to the references in the text—its way of gesturing toward a lineage … Our willingness to serve each other represents the best of us, according to Patchett, and it is almost as if she wants to take the notion of motherhood and release its power into the commons—what if we were willing to mother one another, mother strangers? But she is also always full of warnings about the self-abnegation it requires, especially of women—and never more clearly than in this new novel … ‘The love between humans is the thing that nails us to this earth,’ Patchett wrote in her memoir This Is the Story of a Happy Marriage—a belief her new novel shares but shades with caution. There’s no missing the statement’s brutal, brilliant ambivalence.”

2. The Water Dancer by Ta-Nehisi Coates

“While neither polemical nor wholly fantastical, the story draws on skills [Coates] developed in those other genres … Coates isn’t dropping supernatural garnish onto The Water Dancer any more than Toni Morrison sends a ghost whooshing through Beloved for cheap thrills. Instead, Coates’s fantastical elements are deeply integral to his novel, a way of representing something larger and more profound than the confines of realism could contain … Despite his extraordinary skill as a modern-day social critic, Coates never intrudes on the stately, slightly antique voice of his narrator. But his understanding of modern-day racism illuminates this portrayal of the 19th century, and it’s not difficult to hear the contemporary echoes of Hiram’s observations.”

3. The Future of Another Timeline by Annalee Newitz

“At their best, such [science-fiction] stories combine the appeal of good historical fiction with futuristic speculation, which is certainly the case with Annalee Newitz’s provocative second novel … The question of whose history gets suppressed and whose doesn’t is one of the central questions of the novel, making it eerily timely for our own cultural debates … Newitz’s meticulously researched portrait…includes fascinating sketches of real-life historical figures … Sometimes Newitz’s complex conditions for time travel sound like arbitrary game rules … While this unnecessarily complicates the first half of the novel, Newitz more than makes up for it with her vivid portrait of the raucous South Side of Chicago during the World’s Fair.”

4. The Shadow King by Maaza Mengiste

“… a work of reclamation in a number of ways. For one thing, the story, which dramatizes the invasion and the tenacious Ethiopian resistance, shines a light on a conflict that has often been forgotten behind the battles of the world war that followed it. Ms. Mengiste furthermore centers on the Ethiopian women who played a vital but almost completely unrecognized role in the insurgency. But most important, The Shadow King is not a story about helpless victims of colonial conquest. Against the odds, it is written in a key of pride and exaltation, and its characters have the outsize form of national heroes … Ms. Mengiste ambitiously stretches her canvas to include colliding perspectives … The battle scenes—the best passages in this busy, stirring novel—also have a strongly visual, even cinematic, flair.”

5. The World That We Knew by Alice Hoffman

“Alice Hoffman is a brilliant weaver of magic and the mundane … In her hands, a story we think we know, from a time we think we’ve extracted every possible detail, can become a soulful new voyage into the heart of the human condition … a spellbinding tale of love, loss and what it means to endure … In beautifully precise prose, Hoffman chronicles the experiences of these characters and those whose lives they touch along the way … Though Nazi-occupied France is an endlessly compelling place to many readers, Hoffman never takes her historical setting for granted. Rather than leaving us to lean on what we think we know, she weaves a fully realized vision of the hidden parts of history, chronicling the stories of people who slipped through the cracks on their way to freedom and the emotional toll that freedom took … Page by page, paragraph by paragraph, sentence by sentence, The World That We Knew presents a breathtaking, deeply emotional odyssey through the shadows of a dimming world while never failing to convince us that there is light somewhere at the end of it all. This book feels destined to become a high point in an already stellar career.”

1. Year of the Monkey by Patti Smith

“… a beautiful, elegant, and poetic memoir that takes a single year in the artist’s life, 2016, and delves deep into the events that shaped it—and the feelings and memories they produced … Effortlessly weaving together fiction and nonfiction, Smith takes readers on two unique journeys: one that can be traced on a map and one, infinitely richer and more complex, that takes place inside her head and heart. The result is a hybrid narrative that’s part travel journal, part reflexive essay on our times, and part meditation on existence at the edge of a new decade of life … a beautifully realized and unique memoir that chronicles a transformative year in the life of one of our most multi-talented creative voices. Smith’s approach to nonfiction is unique and brave: It counts as true if it happened, if she imagined it, and if she felt it. This is a book about Smith and the world all around—and that world includes all of us. And that is just one more reason why everyone should read it.”

“It is as if Jamie, wherever she goes, functions as a lightning rod, drawing past, present and future together … Jamie’s writing has a deceptive simplicity: its powers are cumulative. Her way is to build impressionistic detail by recounting conversations, travels, observations of the natural world, and then carefully layer it in. It is its own kind of archaeology. Every now and then, however, she cuts through the assemblage of beautiful prose with a stinging comment: a reminder that the natural balance is out of whack, or that violence and menace can surface just as easily as venerable artefacts from the past … Jamie’s apocalyptism is the quiet kind; it is gradual ageing and erosion, and a build-up of ‘plastic and waste’ that will do us in. But we can also breathe the world in deeply, inhaling a beauty more precious for its fading.”

Read an excerpt from Surfacing here

3. Make It Scream Make It Burn by Leslie Jamison

“Here we see the territory [Jamison’s] writing inhabits: self-questioning while at the same time empathetic, dubious and credible at once. In such a landscape, resolution is, at best, construction or compromise … What Jamison is after is a kind of radical honesty: the ongoing inquiry of a mind at work. That this is not a new issue, but infuses all her writing, is the whole idea—even when she is her own subject, as in the last group of essays in the collection, which deal with family and marriage and parenthood … Projection, longing, and (yes) empathy: as Jamison recognizes, every narrative remains conditional, leaving us between proximity and distance, in relation with one another and yet at the same time alone.”

4. Know My Name by Chanel Miller

“Know My Name tells us not just what it was like to live through these major cultural flash-points, but also all the moments in-between…In how much she reveals of herself, Miller provides one of the most moving and humanizing depictions of sexual assault I have ever read … [Miller] is raw and exposed, and her openness feels like a revelation. At times it’s like reading the diary of a friend. We get to know her through her sense of humor and her artistic vision, and even in the book’s darkest moments, I came to love the way the world looked through her eyes … In giving us the gift of knowing her, Miller has written a singular testament to the human cost of sexual violence, and a powerful reminder of why we fight.”

5. The Second Founding: How the Civil War and Reconstruction Remade the Constitution by Eric Foner

“The Second Founding reflects Foner’s rigorously researched, now mainstream view that Reconstruction was ‘a massive experiment in interracial democracy’; the changes wrought by the Civil War amendments were the product of decades of debate and so radical that they represented, in the words of one Republican leader, ‘a constitutional revolution’ … Foner’s authority and magnetism as a Bancroft- and Pulitzer Prize-winning scholar stem partly from his conviction that history is neither primarily about the past nor…’simply a series of myths and inventions.’ The Second Founding reveals how an exemplary historian can plumb The Congressional Globe and other primary sources to capture the ideas and intentions of those who shaped the Civil War amendments. The result is scholarship that is disciplined, powerful and moving … [an] important book.”