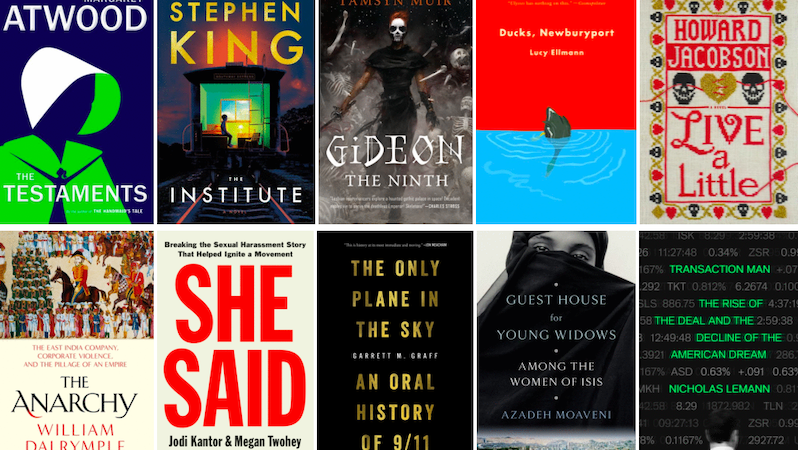 Margaret Atwood’s The Testaments, Stephen King’s The Institute, Lucy Ellmann’s Ducks, Newburyport, and Jodi Kantor and Megan Twohey’s She Said are among the most critically-acclaimed books of the past seven days.

1. The Testaments by Margaret Atwood

“The Testaments opens in Gilead about 15 years after The Handmaid’s Tale, but it’s an entirely different novel in form and tone. Inevitably, the details are less shocking … Atwood responds to the challenge of that familiarity by giving us the narrator we least expect: Aunt Lydia. It’s a brilliant strategic move that turns the world of Gilead inside out … The Testaments is not nearly the devastating satire of political and theological misogyny that The Handmaid’s Tale is. In this new novel, Atwood is far more focused on creating a brisk thriller than she is on exploring the perversity of systemic repression … the fact that Atwood keeps challenging such categories is all part of her extraordinary effort to resist the chains we place on each other … Praise be.”

2. The Institute by Stephen King

“The Institute, is another winner: creepy and touching and horrifyingly believable … casual description of the looming unknown is emblematic of what makes King’s writing, and this book, so effective … In some ways, The Institute reads like a re-working of Firestarter for our times … It is also a tad long-winded. It’s always lovely to have more of a King novel to read, but this one could have lost some pages … That’s a minor complaint for a major work, however. The vast bulk of The Institute is essential—plot and characterization working hand-in-hand to create an intimate picture of horror.”

3. Gideon the Ninth by Tamsyn Muir

“… an incredibly immersive book, with a rich, detailed mythology, gorgeously balanced sentences, and a genuinely meaningful central relationship … I started this book chuckling at the outrageous premise. I finished it crying, because the ending punched me straight in the gut … Muir establishes this complex world so simply and so elegantly that it never becomes overwhelming … The result is immersive; it demands to be swallowed down in long, luxurious gulps. I devoured it in two days and then spent the next day brooding over it, worrying the characters around in my mind.”

“This book has its face pressed up against the pane of the present; its form mimics the way our minds move now: toggling between tabs, between the needs of small children and aging parents, between news of ecological collapse and school shootings while somehow remembering to pay taxes and fold the laundry … In literature, sometimes nothing seems so extraordinary as ordinary happiness … The capaciousness of the book allows Ellmann to stretch and tell the story of one family on a canvas that stretches back to the bloody days of Western expansion, but its real value feels deeper—it demands the very attentiveness, the care, that it enshrines.”

5. Live a Little by Howard Jacobson

“… a darkly funny geriatric love story … Some writers just seem to get better the closer they get to the end—not because they’re worried about death, perhaps, but because they’ve finished worrying about it: dying is for the young to obsess about. Jacobson is nearing eighty, and Live a Little is one of those late-life novels full of such wisdom and insight that it makes you wonder why anyone ever bothers reading—or watching—the young at all”

1. The Anarchy: The East India Company, Corporate Violence, and the Pillage of an Empire by William Dalrymple

“…a vivid and richly detailed story … Dalrymple…is delightfully evenhanded … the greatest virtue of this disturbingly enjoyable book is perhaps less the questions it answers than the new ones it provokes about where corporations fit into the world, both then and now … Dalrymple is surely right that ‘in the end, it all came down to money.’ That is perhaps the true lesson of the company’s history—and one that makes Dalrymple’s book worth reading by everyone, M.B.A. student or not.”

2. She Said: Breaking the Sexual Harassment Story That Helped Ignite a Movement by Jodi Kantor and Megan Twohey

“She Said is…a story of both tremendous cowardice and tremendous bravery …But the book has a quiet countermelody: the way woman after woman sacrificed her privacy and safety to make the world better for each other. Kantor and Twohey are not excepted; their extraordinary care for their sources stands in contrast to the way other people treated these women, as disposable or unreliable … We know how the story ends, but She Said is nonetheless deeply suspenseful, a kind of less swaggering All the President’s Men. But the writing slows and becomes more contemplative toward the end of the book, where the writers explore the aftermath of their story and the beginning of the #MeToo movement.”

“The result is remarkable, and Mr. Graff’s curation of these accounts—drawn from hundreds of his own interviews and from the reporting of other journalists and historians—is a priceless civic gift … On page after page, a reader will encounter words that startle, or make him angry, or heartbroken, or queasy … it is the goodness of ordinary people that leaves the deepest impression … In Mr. Graff’s book, the little details are allowed to speak for themselves, and the effect is one of notable eloquence.”

4. Guest House for Young Widows: Among the Women of ISIS by Azadeh Moaveni

“Azadeh Moaveni has written a powerful, indispensable book on a challenging subject: the inner lives and motivations of women who joined or supported the Islamic State militant group. It is a great read, digestible and almost novelistic, but it is much more than that. Guest House for Young Widows: Among the Women of ISIS tackles many taboos that have hampered cleareyed discussion of Islamist extremism in general and ISIS in particular. The book provides an illuminating, much-needed corrective to stock narratives, not only about the group that deliberately and deftly terrified officials and publics across the world, but also about the larger war on terror and the often ineffective, even counterproductive policies of Western and Middle Eastern governments”

5. Transaction Man: The Rise of the Deal and the Decline of the American Dream by Nicholas Lemann

“…[an] excellent and unusually framed economic history … [Lemann] thoughtfully links income inequality to the transactional theories of the corporation and looks ahead to a possible future model for ‘pluralism’ … This concise and cogent history of the theories that have transformed the American economy makes a potentially dry subject fascinating.”