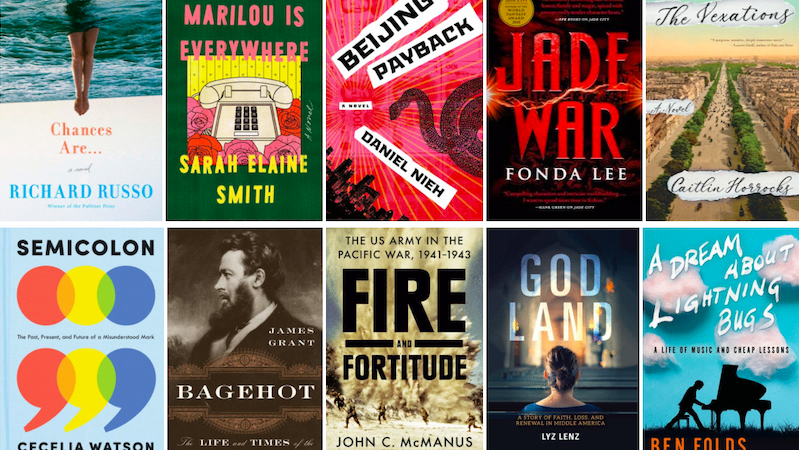 Featuring a new novel from a Pulitzer Prize-winner, the history of a misunderstood punctuation mark, a musical memoir, and more

Richard Russo’s wistful mystery novel, Cecelia Watson’s ode to the semicolon, and a memoir from Ben Folds are among the most critically-acclaimed books of the past seven days.

1. Chances Are… by Richard Russo

“Along with his wry eye for irony and regret, [Russo] offers up a compelling mystery. Savvy readers who pride themselves on anticipating a plot twist, spotting a red herring, and identifying the who-did-it are in for a surprise … a 21st century version of The Big Chill … When the denouement comes, it’s a stunner. Nevertheless, all bombshells feel earned. If you’re on a hammock in the Vineyard or under a tent in Acadia, or slumped over the fire escape of your hot city apartment, chances are your chances are awfully good that you’ll lap up this gripping, wise, and wonderful summer treat.”

“Smith never moralizes in Marilou is Everywhere; she understands the flaws that make everyone—especially those who have been beaten down the world—human. And that’s indicative of Smith’s compassion and generosity as a writer. She never condescends to the characters in the novel, never asks her readers to pity them. While many books set in rural America descend into poverty porn, Smith keeps the humanity of the characters in sharp focus, showing a real love … Smith does a beautiful job articulating this desire that Cindy has, and explaining why she finds herself unable to stop searching for it, even as her life—and Bernadette’s—slowly fall apart … a novel of stunning emotional intelligence, and Cindy an unforgettable character, but it’s Smith’s writing that’s the real star of the book. Her language is hypnotic and enchanting, with lines that read like poetry … Nearly every page of the novel features a breathtaking turn of phrase; the book is almost otherworldly in its beauty and power.”

“…crime fiction with a sympathetic heart—an emotionally layered story of murder, secrets, betrayal, and a son’s loss of innocence … Beijing Payback is a strong debut with series potential. Victor’s personal journey is realistic—by the novel’s end he has been changed … it will be intriguing to see where Nieh takes this character in future installments.” 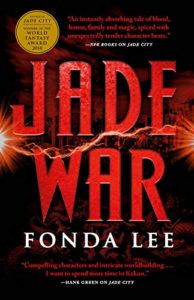 “If The Godfather never was, Jade War (and Jade City) would be how we define generational organized crime stories today … [Lee] juggles the personal and the epic with deft, admirable skill, weaving a story that is equally sweeping and intimate; a magical, almost operatic crime and family drama that feels all the more true because all of her jade-fueled supermen (and women) come with human hearts that bend and break the same as ours.”

5. The Vexations by Caitlin Horrocks

“… marvelous … wonderfully embellishes the world through which Satie wandered like some kind of marooned alien visitor … Bohemian Paris is the setting of a lot of romantic kitsch, but not here. The art is real but so is the squalor, and usually, Ms. Horrocks suggests, the latter defeats the former … It’s the family and friends who give breadth and dimension to this novel…Their stories ground The Vexations in the realm of ordinary mortal travail.”

1. Semicolon: The Past, Present, and Future of a Misunderstood Mark by Cecelia Watson

“According to Cecelia Watson, semicolons aren’t just punctuation marks. They’re also ‘a place where our anxieties and our aspirations about language, class, and education are concentrated.’ That may seem a heavy burden for one little grammatical tool to shoulder. But in Watson’s witty, wily account, it doesn’t feel like an overstatement … For those who enjoy spending their time in these grammatical weeds as much as I do, Watson raises plenty of diverting style-related questions … Semicolon left me hankering for what Watson might have to say about the punctuation circus of Laurence Sterne’s Tristram Shandy or the energizing use of ellipses in Ford Madox Ford’s Parade’s End. In the meantime, there’s plenty to savor in this delectable nugget of a book.”

2. Bagehot: The Life and Times of the Greatest Victorian by James Grant

“James Grant…writes with a sympathy and grasp of detail that suggests a [deep] familiarity. Bagehot was a financial journalist with a love of English literature and a facility for clear and cogent prose. So is Mr. Grant … But this is no hagiography. Mr. Grant is sometimes impatient with his subject. He has had his fill, he writes with remarkable frankness at the book’s outset … But the author’s occasional impatience with his subject makes the book more readable, not less … What Mr. Grant has produced isn’t so much a conventional ‘life’…as a study of the political and economic ideas Bagehot spent the bulk of his energies thinking and writing about … Bagehot is a terrific and efficient survey of the political and economic disputations of mid-Victorian England and a fine narrative of the life of the era’s most brilliant essayist. It is also, I think, a book meant for journalists: those wretched scribblers who string words together for a living in the vain hope that somebody may read them a year from now.”

“…truly stands out by covering an underserved topic … John C. McManus has written the first of what will hopefully be a two-volume set providing a comprehensive and readable narrative of the Army’s critical role in achieving victory over Japan … This book does a remarkable job of furnishing the rest of the story of America’s fight against the Empire of Japan … What makes this volume stand out is that McManus covers the full range of subjects concerning the Army’s rebuilding and initial offensives in New Guinea and the Solomon Islands in 1942 and 1943 … a long overdue book.

4. God Land: A Story of Faith, Loss, and Renewal in Middle America by Lyz Lenz

“… a nuanced examination of the political, personal, and religious complexity of middle America … The divisive nature of faith and politics in contemporary America is what this book is about, and its message is vital: the divides we create are dangerous, and faith that claims to bring people together often leads a ferocious charge to division … Showcasing a deep understanding of middle America that’s devoid of stereotypes, platitudes, and weak generalities, this journalistic narrative is populated by a wide range of voices who put a face on the hurt, confusion, fear, hope, and healing of everyday Americans.”

5. A Dream About Lightning Bugs: A Life of Music and Cheap Lessons by Ben Folds

“Once an artist plays their first sold-out show, or signs their first record deal, or spends their first holiday in Biarritz with Mick and Bianca, they are no longer relatable human beings … It’s an unbridgeable gap, one that Ben Folds, a singer, pianist and musical Everyman whose relatability seems to have been factory-issued, does his best to navigate in his engaging and solid new memoir … It’s about as pure an extension of Folds’s naturalistic musical voice as it’s possible to get … It’s a predictable, celebrity-memoir-narrative arc—obscurity, unfulfilling celebrity, downward spiral, self-help—that even an iconoclast like Folds ultimately can’t resist.”