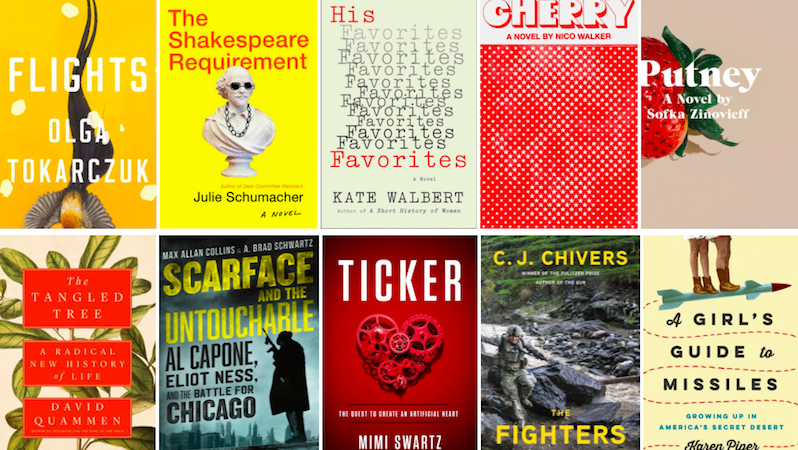 Featuring a Booker Prize-winner, an incarcerated debut novelist, a radical new theory of evolution, and more

“…[a] rich sequence of anecdote, observation, wry aside, personal reflection, extended narrative, and intense speculation about the shape of our world and its future … Tokarczuk is one of Europe’s most daring and original writers, and this astonishing performance is her glittering, bravura entry in the literature of ideas … Very early in this wise, observant, and whimsical book, it becomes clear that the reader has found the ideal travel companion … Flights shifts and shimmers. Its obsessive characters speak in captivating, distinct voices … an international, mercurial, and always generous book, to be endlessly revisited.”

Read an excerpt from Flights here

2. The Shakespeare Requirement by Julie Schumacher

“Readers of Julie Schumacher’s hilarious 2014 novel in letters and/or memos, Dear Committee Members, will need little encouragement to pick up this uproarious sequel … Like the best campus comedies, The Shakespeare Requirement satirizes all manner of academic pieties while maintaining a soft spot for the embattled humanist … Although much of this is simply funny, what works best, unsurprisingly, grows out of the familiar hopes and longing, frustration and grievances, that only superficially have to do with campus life. The slings and arrows of outrageous fortune may be zingers, but finally there’s something to be said for the subtle humor tinged with pathos that hums through Schumacher’s book.”

“Cherry is a miracle of literary serendipity, a triumph born of gore and suffering that reads as if it’s been scratched out with a dirty needle across the tender skin of a man’s forearm … Walker credits Tim O’Connell, his editor at Knopf, with transforming those typewritten pages into this tour de force. But when I contacted O’Connell, he claimed … ‘Nico simply poured everything he had into it.’ That sounds right—and true to the searing authenticity of this novel, which tries to answer the question, ‘How do you get to be a scumbag?’ But in the process of laying out the road to perdition, Walker demonstrates the depths of his humanity and challenges us to bridge the distance that we imagine separates us from the damned.”

Read Janet Hansen on creating the cover for Cherry here

4. His Favorites by Kate Walbert

“Kate Walbert’s most powerful novel yet is a case study in the perversities of power imbalances. This slim but by no means slight novel continues Walbert’s explorations of how society’s sexual biases and constraints have hampered women … Walbert, known for sophisticated, multiply-stranded narratives that span generations, has pared her new novel into a sharp blade … With Jo Hadley, Walbert has created a consummately credible character, convincing as both a bright, vulnerable, traumatized yet un-self-pitying teenager and a sympathetic, clear-eyed but bruised adult … Jo is a savvy raconteur who recognizes that there are many ways to frame a story, from different perspectives … Walbert’s novel is fueled by gorgeous writing as well as moral outrage. It’s an artful argument for the importance of the long overdue #MeToo movement, but it’s more than that … His Favorites is heartbreaking and galvanizing.”

Read an excerpt from His Favorites here

“Zinovieff interrogates the reader through these myriad voices to consider whether Ralph and Daphne’s relationship can represent both seemingly oxymoronic states [romance and abduction] … the differing styles of narration— Ralph’s poetic lyricism, Daphne’s slow-burning convictions and Jane’s no-nonsense, scientific mind—are sharply defined, and form an intriguing final portrait. It is a disturbing, well-structured, nuanced story that provides no simple answers—an important addition to an urgent, current conversation.”

1. The Tangled Tree: A Radical New History of Life by David Quammen

“As he follows scientists into thickets, real and rhetorical, he keeps an eye not only on the rigor demanded by science, but on the wonder and play and curiosity—the noodling—of serious creativity. These are the very qualities that infuse and leaven his own work, making unlikely page-turners out of burly books … He keeps the chapters short, the sentences spring-loaded. There are vivacious descriptions on almost every page … Each section ends with a light cliffhanger. Quammen has the gift of Daedalus; he gets you out of the maze.”

2. Scarface and the Untouchable by Max Allan Collins and A. Brad Schwartz

“The authors’ intent is to take two men who have been mythologized over decades, strip away the fictions that have been piled on them, and leave us with a clearer sense of the true Ness and Capone. And they succeed admirably. Collins brings all his skills as a novelist to the story, painting in bold strokes a picture of Prohibition-era Chicago, a city almost entirely under the control of Capone’s criminal organization. His writing is about as far from a history text as you can imagine … Careful research combined with vivid pulp style.”

Read an excerpt from Scarface and the Untouchable here

3. Ticker: The Quest to Create an Artificial Heart by Mimi Swartz

“Swartz tells all their stories with a novelist’s deft touch for character and dramatic tension … The philosophical off-gassing that accompanies these developments [in heart techology] is also addressed … Ticker needs no further comparisons to The Right Stuff. But there are some similarities: Both space exploration and the development of an artificial heart are pursuits that do not yet have a final chapter. And both enjoyed periods of great renown, only to have the public begin to lose the fervor of its early interest … Those involved in the development can’t settle into the complacency that immerses the rest of us. Which means Swartz had to build an ending that I won’t describe here because it’s too fragile and beautiful to spoil.”

Read an excerpt from Ticker here

4. The Fighters by C.J. Chivers

“C. J. Chivers, a senior writer for The New York Times and a former Marine infantry officer, begins his new book with a description of an American weapon, equipped with GPS sensors and a guidance system, hitting ‘precisely the wrong place’ and killing and mutilating a family of women and children on the Afghan steppe as a consequence. But Chivers’s narrative has only begun to slam you in the gut; later on, the author captures the psychological effect the errant bomb has on the Marines at the scene. Indeed, because of the way the stories and characters spool into one another with mathematical intensity, and the second-by-second in-your-face descriptions of prolonged battles from a sergeant’s eye view, The Fighters: Americans in Combat in Afghanistan and Iraq could be the most powerful indictment yet of America’s recent Middle East wars.”

5. A Girl’s Guide to Missiles by Karen Piper

“[A Girl’s Guide to Missiles] has a brilliantly overdetermined setup, one that yields both black comedy and sickening lurches of insight … While still a child, Piper naturally isn’t equipped to question the broader context she’s living in, although there is the occasional kids-say-the-darndest-things moment … This subject matter is a gift, a giant joke on the geopolitical import one’s home life can be felt to have, though perhaps it’s inevitable that not all of Piper’s personal anecdotes can quite bear the weight this places on them.”

Read an excerpt from A Girl’s Guide to Missiles here