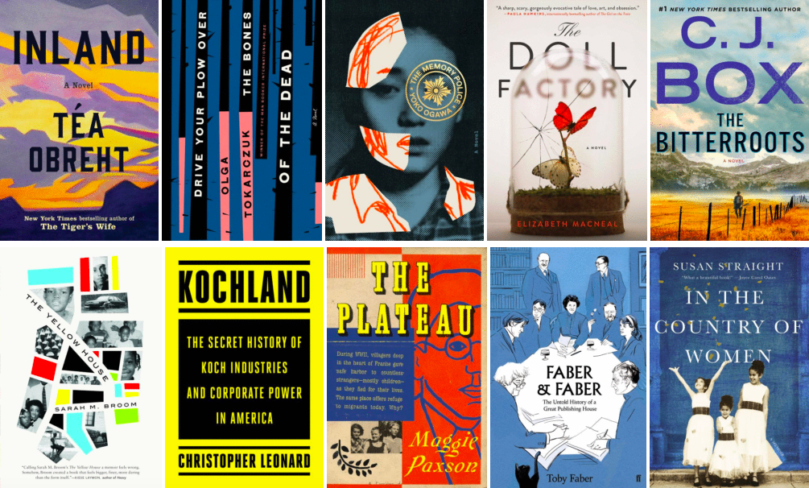 Téa Obreht’s revisionist western, Olga Tokarczuk’s murderous fairy tale, and Sarah Broom’s New Orleans memoir are among the most critically-acclaimed books of the past seven days.

“Rarely, a literary ending comes along that feels too perfect to limit to safe, vague praise. I’m not talking about the wild twists or clever reframings that’ve distinguished some of the year’s buzzier titles. Inland derives every dollop of its narrative tension from its climax-oriented structure, paralleling two character studies that must, by the laws of good storytelling, intersect. Obreht brilliantly approaches this inevitability by weaving it into the fabric of her haunted setting, where fate can’t help but grab the steering wheel … Obreht is a robust writer: There’s meat on her characters, places, plots, themes, dialogue—all vividly rendered, deep and fresh and exciting, offering plenty to chew on … What Obreht pulls off here is pure poetry. It doesn’t feel written so much as extracted from the mind in its purest, clearest, truest form.”

2. Drive Your Plow Over the Bones of the Dead by Olga Tokarczuk

“Sometimes the opening sentence of a first-person narrative can so vividly capture the personality of its speaker that you immediately want to spend all the time you can in their company. That’s the case with Mrs. Janina Duszejko, narrator of Drive Your Plow Over the Bones of the Dead … In Antonia Lloyd-Jones’s beguiling translation, Janina’s passions and pet peeves come through loud and clear … may don the outward form of a seriocomic murder mystery. But deep down it’s a barbed and subversive tale about what it takes to challenge the complacency of the powers that be.”

3. The Memory Police by Yoko Ogawa

“Although the Memory Police could become the stuff of cheap Orwellian horror, Ogawa avoids this trap by consistently presenting them with a calm, chilling understatement that repeatedly catches us off guard. Here as throughout the novel, Ogawa’s imagery is empowered by the beauty and simplicity of her prose, which, in this elegant translation by Stephen Snyder, evokes a mood of elegiac sadness that blankets the twists and turns of the story and lingers long after the novel ends in inevitable dissolution … Ogawa offers no explanations for the inexplicable ‘laws of the island.’ None are needed … The richness of characterization, the subtly poetic imagery, and the strangely compelling nature of the leisurely plot make The Memory Police singularly unforgettable.”

4. The Doll Factory by Elizabeth Macneal

“The final chapters of Elizabeth Macneal’s delightfully creepy novel kept me screwed to my office chair … What more could one want from a Victorian thriller? But Macneal delivers even more. The Doll Factory, which is already a hit in England, offers an eerily lifelike re-creation of 1850s London laced with a smart feminist critique of Western aesthetics. It’s a perfect blend of froth and substance, a guilty pleasure wrapped around a provocative history lesson … Macneal deftly paints her fictional heroine into the colorful lives of the Pre-Raphaelite Brotherhood … They strut through these pages radiating all their brash brilliance, fragile enthusiasms and comic eccentricities (including their fondness for wombats) … This exuberant re-creation of London is fascinating, but it wasn’t Macneal’s feminist critique of the Pre-Raphaelites’ aesthetics that almost made me miss a flight to California. Credit for that goes to a taxidermist named Silas, whose story slithers along underneath the tale of Iris’s liberation.”

“Corrupt towns are a staple of both crime fiction and westerns, as are twisted families ruled by evil patriarchs. Here, Box entwines those tropes with a harrowing subplot…and fashions a snare that will render readers utterly immobilized until they’ve closed the book. Game warden Joe Pickett may be Box’s main man, but Cassie is equally compelling, and readers will be delighted to have her back. Not content with merely ruling Wyoming, Box has become the dominant mystery/thriller author of the mountain West—and deservedly so.”

“Sarah M. Broom’s gorgeous debut, The Yellow House, reads as elegy and prayer … Sarah M. Broom is a writer of great intellect and breadth. She embraces momentous subjects. The Yellow House is about the relentless divestment of wealth from the African American family no matter how hard its members work; and our government’s failure to protect its poor from predictable environmental catastrophe and subsequent trauma; and our gross neglect of poor neighborhoods; and sham promises that never materialize or are broken too easily, and the papering over of deep systemic problems by politicians and we the people. The Yellow House is also about the persistence of love and grit … If Broom has bitten off the whole world and cannot quite swallow it, we can only hope she will continue to mine this material with the same sensitivity and insight demonstrated in The Yellow House. She understands her questions are ‘at base, unanswerable’ …. Nevertheless, we will eagerly await her further interrogations.”

Read an excerpt from The Yellow House here

2. Kochland: The Secret History of Koch Industries and Corporate Power in America by Christopher Leonard

“… extraordinary … a fascinating, in-depth analysis of Koch Industries and its astounding influence and power. Don’t let its 700-page length put you off: Leonard’s book reads like a thriller, and a dark one at that. It’s peopled with myriad characters as fascinating as those in Game of Thrones (and a dictionary of significant people is included) … Leonard covers a lot of ground, but especially significant is a chapter analyzing Charles Koch’s long-held opposition to climate regulations … essential reading for anyone concerned about the America our children and grandchildren will inherit.”

3. The Plateau by Maggie Paxson

“A quick summary might make Maggie Paxson’s The Plateausound too earnest to bear … But something surprising and beautiful happens in these pages. Paxson braids those strands of history, philosophy and reflection into a book that is precious and powerful … Paxson is a descriptive essayist who can make readers feel the chill of a wintry French gale or the airlessness of a boxcar headed to a German death camp or her own heart breaking as she confronts other examples of human depravity, many involving refugees from around the world who find themselves at the Plateau. She’s evocative without being flowery, philosophical without being weighty. And political? Not overtly … Some readers might not like the way she meanders from topic to topic, but she never really loses her focus.”

Read an excerpt from The Plateau here

“For someone writing both a family history and a publishing one, Tony Faber deals fairly with the personalities, conflicts, failures and courageous decisions that shaped the firm. His format is fascinating. The book primarily consists of extracts from letters and memos composed on the run, snap literary judgements jotted down while its staff juggled the fraught financial intricacies of keeping the firm solvent … one pleasure of this book is how these men (few female voices are heard), slowly growing old…rarely have time to consider how posterity will judge their decisions. They are too caught up with wartime paper shortages, bombs falling on Mrs Faber’s garage, battles with censorship…and keeping the show on the road. Filled with brilliant cameos, this is for anyone who wonders what publishers actually do all day.”

5. In the Country of Women by Susan Straight

“Certain books give off the sense that you won’t want them to end, so splendid the writing, so lyrical the stories. Such is the case with Southern California novelist Susan Straight’s new memoir, In the Country of Women … vibrant pages are filled with people of churned-together blood culled from scattered immigrants and native peoples, indomitable women and their babies … Despite our tendency to gaze to the future, with her words, Straight gives us permission to remember what went before with passion and attachment … [a] beautiful book.”