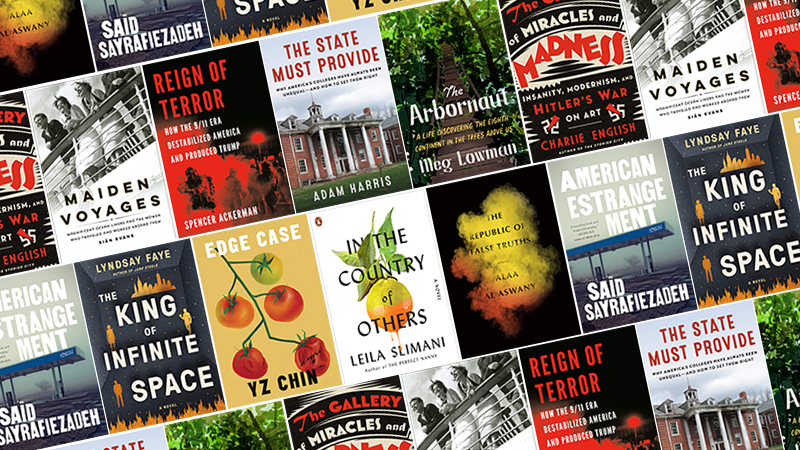 Leila Slimani’s In the Country of Others, Said Sayrafiezadeh’s American Estrangement, Alaa Al-Aswany The Republic of False Truths, and Charlie English’s The Gallery of Miracles and Madness all feature among the best reviewed books of the week.

1. In the Country of Others by Leila Slimani
(Penguin Books)

Read an excerpt from In the Country of Others here

“The sentences in The Country of Others are layered, and more laden with material; the writing is more exploratory, it reaches outward. And a complex world pushes back against her words, changing the quality of her attention to it … Nothing feels in the least dutiful or cautious, however, in her creation of her fictional characters; she still works her dangerous magic and delivers shocks, imagining the violence of their desires and rages … Slimani’s charged language, feeling for the fracture lines inside individuals and between them, and between different cultures, prepares us for the worst: which comes close, but never quite comes home.”

2. The Republic of False Truths by Alaa Al-Aswany
(Knopf)

“… a multi-voiced work of elation and despair—as the power of the people briefly triumphed over an oppressive and unscrupulous autocracy—and a vivid take on both sides of the revolution, from the perspective of those who either enthusiastically supported or violently opposed the reforms … a lively, versatile and frequently chilling English translation by SR Fellowes … above all, a robust and brave undertaking. For this reason a surreal air hovers above the prose, which veers between uneasy irony and straight-out reportage, even though the characters are fictional … Aswany’s skewering of the excesses of corruption is written in a deceptively benevolent style, further enhancing the background noise of disquiet and outright terror, which grows almost deafening as the novel progresses … If the novel has a major flaw it is that Aswany relies too much on stereotypes to create a sense of depth and connection. Yet despite this The Republic of False Truths is a blistering, bold dissection of a failed revolution, and of the disenchantment and dissent that inevitably follow.”

“… excellent … [Sayrafiezadeh] writes with a veteran’s swagger and discipline. Nothing here feels obligatory or tossed off; instead, the collection joins a list that includes Leonard Michaels’s I Would Have Saved Them if I Could, Lorrie Moore’s Like Life and Charles D’Ambrosio’s The Dead Fish Museum as a second book of stories that exceeds and expands upon the promise of the first, confirming the writer as a major, committed practitioner of a difficult form.”

“Faye brings considerable skills and irreverent humor … Lush and magical, thoughtful and provocative, The King of Infinite Space is a remarkable achievement, staying true to Shakespeare’s tragic play in ways that will surprise and delight while reveling in neurodivergence, queer attraction and quantum physics. Though the buildup is slow and Benjamin’s philosophical meanderings occasionally digressive, this is a novel to stick with for its rewards of a surprising plot and Faye’s delightful storytelling.”

“Chin’s specificity and wonderfully drawn minor characters add depth and richness to a story that another writer might have washed out with the glaring light of moral clarity … What emerges is not only a subtly provocative depiction of the tech industry, and this country, as tilting ever more off-kilter; but also a realistic portrayal of a woman in crisis. Edwina’s problems are of the kind that can’t be solved through faulty logic or convenient substitution, but of course we humans, not yet the best versions of ourselves, will try the faulty logic and convenient substitution anyway.”

1. The Gallery of Miracles and Madness: Insanity, Modernism, and Hitler’s War on Art by Charlie English
(Random House)

Read an excerpt from The Gallery of Miracles and Madness here

“A powerful and disturbing portrait of a devastating chapter in the history of Nazi terror … Many of the artists [psychiatrist Hans] Prinzhorn discovered—men Hitler damned as ‘degenerates and lunatics’—became victims in the euthanasia program, which the author trenchantly brings to life … A revelatory look at the ‘gangplank for the Holocaust’.”

2. Maiden Voyages: Magnificent Ocean Liners and the Women Who Traveled and Worked Aboard Them by Siân Evans
(St. Martin’s Press)

“This is a thoroughly captivating history … Evans recreates the era through richly detailed profiles of women from various backgrounds … the author captures these wildly disparate experiences as played out within historical context, providing interesting angles on how women’s roles evolved from 1900 to the 1950s. First-hand accounts bring an immediacy to the never-ending action, and Evans is a good storyteller, deftly weaving individual women’s adventures into contemporary current events … Readers will marvel at these stories about the golden age of luxury cruise ships, and, more importantly, learn how millions of women changed their lives by going to sea.” 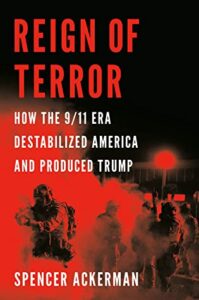 3. Reign of Terror: How the 9/11 Era Destabilized America and Produced Trump by Spencer Ackerman
(Viking)

Read an excerpt from Reign of Terror here

“The book argues powerfully that the open-ended War on Terror has been an exceptionalist fantasy, a bipartisan failure, and a profound risk to American democracy … The result of nearly two decades of reporting on the wars from a skeptical position, Reign of Terror is attuned to their costs … One aspect of the book that is both unusual and important is that Ackerman gives attention to the lives of people on the wrong end of U.S. violence, human beings who remain shockingly unfamiliar to most Americans … In the genre of books that seek to explain why we are in the mess we are in, Reign of Terror is a formidable entry. To those who want to portray Trump as wholly exceptional, and discontinuous with the recent past, the book is an essential corrective … Ackerman’s book lands at a pivotal moment.”

=4. The State Must Provide: Why America’s Colleges Have Always Been Unequal—And How to Set Them Right by Adam Harris
(Ecco)

“Harris exposes the menace in the mundane. Through vivid storytelling, he documents how white presidents of all-white, state flagship universities worked tirelessly alongside state lawmakers throughout much of the 20th century to keep segregation alive to the detriment of Black colleges … is about more than inequities in higher education. It is a meditation on racism and inequality in America … Harris’s writing is as refreshing as it is haunting. His sobering account of Gaines, a sharecroppers’ son who became the lead complainant in the 1938 Supreme Court case, conveys the toll of uplifting the race … Harris evokes a sense of urgency by laying out the stakes of letting longstanding inequalities among our colleges and universities continue as they are. He joins a new wave of scholars like Eddie Cole, Cristina Groeger, Matthew Johnson and Crystal Sanders looking critically at how race, education and history intertwine to shape our present-day reality … a must-read, detailing the complex dynamics that both reflect our nation’s dark history and show us the way toward a more equitable future.”

=4. The Arbornaut: A Life Discovering the Eighth Continent in the Trees Above Us by Meg Lowman
(Farrar, Straus and Grioux)

Read an excerpt from The Arbornaut here

“[Lowman] excels at bringing the natural world to life in language … Lowman’s driving curiosity finds a productive outlet in the scientific process, which she ably describes for lay readers. Her research is full of life, energy, intelligence and determination. It’s impossible to read about it without wanting to examine the natural world more closely! While reading The Arbornaut, I found myself staring out of my second-story windows, trying to discern whether the leaves of the ‘upper canopy’” of my Midwestern trees differed from those visible at ground level. This is exactly the kind of response Lowman hopes for. She is dedicated to getting everyday folks into the canopies, which she argues can advance scientific discovery (more eyes collecting more data) and benefit the planet (more people dedicated to ecological preservation) … a book to reach for if you, like Lowman, love the natural world and want to live in it fully.”